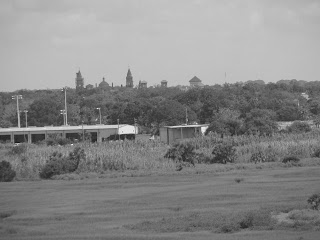 I just returned from St. Augustine, Florida to celebrate my 25th wedding anniversary. It has everything this history teacher loves….lots of history and the beach as well. The picture I’ve posted above was made as we were leaving the beach area and looks over the historic area of St. Augustine. You can just make out the buildings over the trees....
Say “St. Augustine” and you might instantly think of its designation as the oldest continuously occupied European established city and oldest port in the continental United States. However, if you told me that the city was founded by Ponce de Leon on his search for the much ballyhooed Fountain of Youth I’d have to pull out my big red marker and place an X on that lovely forehead of yours.
No, the credit of founding St. Augustine does not go to Ponce de Leon. In fact, the idea that he even landed on the North American continent at St. Augustine is still heavily debated by many history scholars. While some argue St. Augustine was the place others believe he came ashore south of St. Augustine at a place known as Ponce de Leon Inlet or even further south at Melbourne Beach in 1513. Yes, old Poncey was looking for the Fountain of Youth but even that is debated since there is no known connection between Ponce de Leon and the supposed Fountain of Youth. The dots were connected by history writers after his death and the facts are on shaky ground.
The current touristy Fountain of Youth location in St. Augustine is merely a tribute to the story…..a story….a story….no facts, my dear history lover. No facts. It is a good story though. :)
The credit for founding St. Augustine goes to Pedro Menendez de Aviles in 1565. He was a Spanish admiral and pirate hunter.
You might tell me that St. Augustine was attacked by the British in 1702 and again in 1740 by the colony of Georgia’s own James Oglethorpe as he led the British in the Siege of St. Augustine during the War of Jenkin’s Ear. Yes, an ear….men will fight a war of every little thing, won’t they?
You might want to remind me St. Augustine had the first free community of ex-slaves in 1738 or that the city was in the hands of Loyalists during the American Revolution serving as the location where three signers of the Declaration of Independence cooled their heels on the British dime.
You might want me to remember the large number of Greek settlers in the area or the Minorcans whose story resembles that of the Cajuns in Louisiana.
You might want me to remember St. Augustine as the location of the fortress Castillo de San Marcos which was built by the Spanish and later renamed Fort Marion after Francis “Swamp Fox” Marion of American Revolution fame. Over time the fort housed such notables as Osceola, John Horse, and the daughter of Geronimo was born at Fort Marion.
A modern thinking person such as yourself might want me to know St. Augustine became a winter resort of the wealthy due to Henry Flagler and his railroad. You might even want me to know that St. Augustine abounds in little known and untold Black History that has only come to light in recent times such as the fact that the U.S. Signal Corp had a training facility there that trained the Tuskegee Airmen.
Yes, yes, yes….you could tell me all about St. Augustine, but this past weekend all I cared about was my companion for the last twenty-five years, my nice bed and breakfast (which I strongly recommend to all my friends and family…no children allowed though), my nice private pool, and the beach……MY beach…..not Ponce de Leon’s ….not Pedro Menendez de Aviles’….mine, mine, mine, ALL MINE. :) 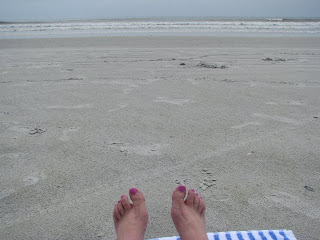 I've never been to St. Augustine and yet I have a fond association with it because of some generous ladies who helped me when I was first pregnant. I wanted to breastfeed my baby but no one could assure me that I wouldn't starve him instead until I met the ladies of La Leche League.

Why would they have named an organization something as likely to be mispronounced as La Leche? Well, in the 1950s newspapers would not print the words breast or breastfeeding. They didn't want to call themselves the Nursing Mothers League because that would be confused with RN-type nursing.

The solution came from one of the founding fathers of Le Leche, Dr. Herbert Ratner, who had been to St. Augustine and had visited the shrine there dedicated to Nuestra Senora de la Leche y Buen Parto. He recognized in the title a reference to mothers' milk that could get past the censors in the newspaper office!

The shrine is on the spot where it is believed Father Francisco Lopez de Mendoza Grajales, chaplain of Pedro Menendez de Aviles' expedition, celebrated the first Mass in America's first mission.

Wasn't St. Augustine also the staging grounds for the "American" episode in the European religious wars when the good Catholic Spanish left St. Augustine to go north to slaughter those "evil" French Huguenots (Protestants) who tried to establish a settlement in the Carolinas ? IIRC, Spanish leader/governor de La Florida, was a gentleman named Mendez ?

Hope you're having a Great Summer ! Congrats on Anniversary #25....and may you both live happily ever after !

Hello People, I was on a holiday for a month just passing by read this interesting post its great to see that every thing here is getting more lively...thanks a lot for these keep them coming....
___________________
Dyanadevis
Increase your brand popularity overnight