The search for the Northwest Passage, a route that was eventually mapped and traveled through the Arctic Ocean connecting the Atlantic and Pacific Oceans, is one of those ongoing events in history that teaches what real desire, real guts, and real determination is all about. In fact, many historians point to Sir Humphrey Gilbert as the person who coined the name Northwest Passage as early as 1576 when control of trade was the inspiration that spurred the explorers attempt to find a passage. It took nearly 300 hundred years of continuous searching before the passage was found.

When it became evident after many years of searching that there was no water route across the United States the explorers began to head north in their search. If you travel far enough the Northwest Passage does exist. Unfortunately, the waters are frozen for most of the year and the quest to finally make it through from the Atlantic side to the Pacific claimed many a life.

Look at the painting I’ve posted below: 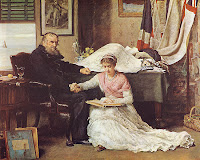 The painting is titled The North-West Passage by John Everett Millais and it hangs in the Tate Gallery in London. Notice the maps and other mementos of the sea that surround the old man and the younger girl. Notice the man’s clenched fist. Millais meant for this painting to elicit public sentiment and represents British frustration at their failure to conquer the passage.

Millais completed his painting in 1874. Twenty-nine years earlier Sir John Franklin had gone missing along with the crews of the HMS Erebus and Terror during a Northwest Passage expedition. In 1850, Robert McClure and the crew of the HMS Investigator were sent out to search for Franklin. McClure and his men overwintered in the Arctic three different times before they finally circumnavigated the Americas by discovering and traversing the Northwest Passage over ice and via ship. McClure and his men had to abandon their ship when it became caught in the ice during their second journey and just recently the ship was discovered in 36 feet of water in relatively good shape.

The find reminds me of the fictional move National Treasure and the location of the Charlotte……a ship that held important clues for Nicholas Cage and is a wonderful connection for kids to make between history in a book and history in real life.

Very nice post. I actually read it to my kids and they love National Treasure.