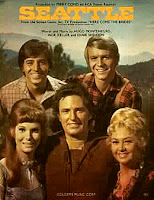 The Mercer brides post sure brought back some memories! I also was infatuated with Bobby Sherman, and loved Here Come the Brides. It was on, as I remember, the same night as Julia and The Brady Bunch--all 'mandatory' TV viewing for my 9 year old self.
Sue Sirgany

Very interesting post! I love tying history into personal stories the way you did. I used to read those same magazines. :-)

Thanks for the history and including my first reason for buying tiger beat ;-) Bobby Sherman was my first... loved that show!!! Thanks for the memories (history now ;-)

Being of a different generation, I'd never heard of this show or history, a really interesting post. Living in Alaska, I wondered if anything similar occurred; I'm sure Alaska was pretty male-heavy for some time, at least as far as white settlers were concerned. I found this pamphlet trying to encourage women to move to Alaska.

Love your blog! I also enjoy teaching history in an elementary classroom. We must be near the same age as I, too, loved Tiger Beat magazine. Do you remember Tony DeFranco? He was my love! I am your newest follower!