Do You Know This Woman? 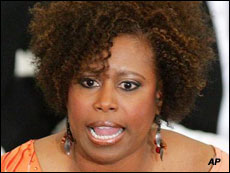 Do you know who this is? According to her you should and so should every member of the one thousand plus U.S. Capitol police force. Ms. McKinney is the Georgia representative from the fourth Congressional district. Quite frankly I am embarrassed to claim her and have been for some time.

Apparently she struck a Capitol police officer when he tried to stop her from entering a House office building without going through a metal detector. Members of Congress wear identifying lapel pins and routinely are waved into buildings without undergoing security checks. From what I understand staff is moved around often and the office building Ms. McKinney was entering is not her own. This is not the first time Ms. McKinney has been offended when she's not recognized.

“Now we're hearing reports from others on Capitol Hill that Cynthia McKinney has a reputation for treating people whom she considers beneath her status with disdain ... and especially white people whom she considers to be beneath her. One former staff member on the House International Relations committee, Richard Stafford, is now talking about an incident where McKinney struck him and pushed him aside when he tried to stop her from entering a closed-door, members-only meeting with a friend and two small children. He wanted to press charges then, but figured it would end his career.
It's interesting to note that McKinney issued two statements yesterday. The first statement, which you can read here, shows McKinney's arrogant and hot-headed side. This is the McKinney who evidently has a habit of striking people, especially white people, who get in her way. In the first statement McKinney says that Capitol Hill Police are "required" to recognize members of congress. Wrong ... that is not so. There is no requirement that they recognize members of congress. If such a requirement existed then there would be no need for ID cards. These Capitol Hill Police are there to protect the members, not recognize them. Someone apparently told McKinney that this "poor, poor pitiful black me" routine wasn't playing well, so she issued this second statement in which she merely says that members of congress "expect" (the "require" word is gone) to be recognized, and expressed regrets that the incident occurred. Note, please, that she didn't apologize for hitting the police officer. She just said that she's sorry the whole thing happened. There's a difference there, and those of you who didn't attend government schools might be able to figure it out.
Now ... don't get your hopes up that this is going to have any affect on her reelection chances in November. She's safe. The voters of Georgia's 4th Congressional District know that Cynthia McKinney is considered to be a pariah and somewhat of a clown in the Congress. They know that she is ineffective. This does not matter to them. One McKinney constituent, Andrew Hicks, says "She is a good woman. I will always support her 100 percent." Another, Fred Maxwell is quoted in the AJC as saying "Had she been one of the white persons, they would not have asked her for her ID. I still think the Republicans are trying to get her out of office." So, there you go. It's those white persons again. Damn, they can sure be pesky, can't they?”

This is the same Cynthia McKinney who always makes sure she’s on the aisle during the State of the Union address so the camera can get her attempting to shake hands with the president. It’s quite a joke around here. “Did you see McKinney?” “Yeah, she sure was pushing them people aside to get to the President.”

This is the same Cynthia McKinney who lost her seat awhile back and blamed the media and the Jews. Per the Weekly Standard she likes to hang out with Louis Farrakhan, calling globalization a “cruel hoax,” advocating for Zimbabwean dictator Robert Mugabe and concerning September 11th likes to state “What did this administration know and when did it know it, about the events of September 11th? Who else knew, and why did they not warn the innocent people of New York who were needlessly murdered? What do they have to hide? What is undeniable is that corporations close to the administration have directly benefited from the increased defense spending arising in the aftermath of September 11th.” Yes, I guess mastermind George planned it all.

This is the same Cynthia McKinney who ridiculed Rudy Giuliani for refusing ten million dollars from Saudi Prince Alwaleed bin Talal and asked the prince to circumvent Giuliani’s control by donating the money to charities.

This is the same Cynthia McKinney who has a list of campaign donors that looks like a terrorist sympathizer's love fest.

The Daily Kos has a say about Ms. McKinney and the California Conservative has a great response to the race card issue. Tammy Bruce thinks the change in Ms. McKinney’s hairstyle is the root of the problem.

Wonkette reminds us that it was McKinney who wants to get down to the real facts concerning Tupac's death. The title description for the bill states, “To provide for the expeditious disclosure of records relevant to the life and death of Tupac Amaru Shakur” I’m not kidding. She’s representing a large portion of the citizens of the state of Georgia and her most pressing concern is to get to the bottom of a rapper's, ummmm thug's death.

Ms. McKinney needs to realize the U.S. Capitol can be a very dangerous place. History tells us so. One of the first documented violent events occurred in 1856 when Senator Charles Sumner of Massachusetts was severely beaten after he spoke about ‘The Crime Against Kansas’. Sumner’s remarks reached a high point when he accused Senator Butler of South Carolina of ‘taking the harlot slavery as his mistress.” Senator Butler’s nephew was Representative Preston Brooks. He was highly offended by Sumner’s remarks and proceeded to beat the dickens out of Sumner with his cane on the Senate floor. Senator Sumner was so severely injured that he did not resume his duties until December, 1859.

In May, 1894 with the unemployment rate at 18%, Jacob S. Coxey, an Ohio labor reformer, was one of the leaders of a labor march in Washington D.C. Mr. Coxey was arrested for trespassing on U.S. Capitol grounds when things got a little out of hand.

Through my research I located three different bombings on U.S. Capitol grounds----in 1915, 1971, and 1983. The bombing in 1971 was charged to Laura Whitehorn who was convicted and she served her time in jail.

In 1983 Senators were expected to make a late night of it but ended early unexpectedly. Moments after everyone was gone a bomb exploded blowing walls away from the cloakroom and glass flew over the entire Senate chamber.

As our American society has become more violent the U.S. Capitol has made security changes. After the ’83 bombing concrete bunkers and metal detectors were added to the grounds. The west front was closed to vehicles and many of the major corridors used by Congressmen were closed to people unless they had a security pass. After the Persian Gulf War and the Oklahoma City bombing security dogs were utilized and hands-on frisking became the norm. Delivery trucks are searched and timed from check point to check point while on Capitol grounds.

Sadly the U.S. Capitol police force lost two men on July 24, 1998 when a former mental patient from Montana walked up behind one of the officers and shot him in the head. The poor man thought he was personally being spied on by the government through his satellite dish.

Mrs. McKinney, why can’t you just follow procedure and wear the damn lapel pin? Would it hurt you to follow procedures? The officer was following procedure. You didn’t have the proper identification. Face it. You’re no Teddy Kennedy or John McCain. Why would every Capitol policeman recognize you?

In my own building I have been stopped by subs when I have failed to wear my identification badge. I applaud them for having the backbone to stop me. That’s what we are supposed to do to keep our workplaces safe. I’m not offended. I’m glad to have to prove who I am.

What about it Ms. McKinney? Stop wasting time and apologize, put on the pin, and get on with the business of the people.

A friend of mine who works security at the U.S. Capital talked with me the other night and added an interesting tidbit. It is part of the job to know the faces of the members. That has been a long-standing policy. They are given pictures of all members when hired and in time are paid to know a member from a non-member.

Anniversary.... April 1 is indeed an interesting day for proposing marriage. Did you enjoy sitting around and watching 'future' hubby fish? Why didn't you join in?

My anniversary of getting engaged is May Day. Several friends commented about that as at that time, I was much more conservative than I am now.

As for your congressional rep., I guess people get whom they vote for. Fortunatly, there is a two year term of office for the House of Representatives, so with luck, she can be removed from office and stop embarrasing the people who sent her to Washington. We are also stuck with a "House minority party" representative who is not know for being mild mannered, couth or civil. But he won't go unless the opposition party finds someone with an ounce of brains to run against him. Currently, he is engaged in a nasty, foul smear campaign against a fellow democratic challenger.

Thanks for the history of Washington follies and fun!

Allen...you sound like some of the parents I have to deal when they want to make excuses for their kids. It is interesting that Capitol policemen are supposed to recognize every member of Congress, but let's be real. That's alot of people. I can't remember 400+ names and faces and I don't expect them to. I do expect people to follow procedures and that includes the police and the members of Congress. For Ms. McKinney to be offended is frankly a waste of the taxpayers time. I hope the police see this through. This was not a race issue----it's a matter of safety for all who visit the Capitol. To use the race card to handle in such holier than thou attitude is simply a slap in the face to all minorities who have had legitimate claims of racial and sexual discrimination.

Here's another interesting tidbit I learned from a Washington based radio reporter for WSB AM750 named Jamie Dupree. He advises that Senator Robert Byrd is the only Senator who wears the appropriate security items AND goes through the metal detectors at all Capital building entrances.

Thanks for the comment Polski----I'm grateful that Ms. McKinney is not the representative for where I reside, but she is from Georgia. Unfortunately the a large majority of the folks who can vote her in or out think she's fantastic. They voted her out for one term---a lovely lady replaced her and did many wonderful things. Unfortunately she decided to make a Senate bid and the slot was open for McKinney to run again. There is talk here that several opponents are ready and waiting. Georgia politics is sooooooo much fun.