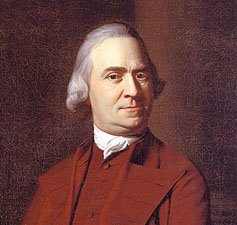 Over the last several days we have become knee deep into the American Revolution. During our review of taxes, taxes, and more taxes we were making a list of the different ways colonists protested the taxes. As they volunteered I wrote-----boycotts, smuggled goods, letters to Parliament, petitions, and violence. A young man volunteers, “The Sons of Liberty.” Immediately a girl speaks up and says, “Daughters too----the Daughters of Liberty!” I make separate entries on the board to please the masses.

I say, “I think we have them all. What about important people who spoke out about the taxes?” Students rattle off the following names---James Otis, Mercy Otis Warren, and Patrick Henry. “There’s one more that we’ve talked about, so far,” I prompt.

Another voice counters, “No, John Adams. Sam Adams is the name on my Dad’s beer.” The room erupts in laughter, shouts, and counter-shouts from all corners. I raise my hand----the Harry Wong ‘guaranteed to get them quiet’ way.

I ask the class to turn to the appropriate page in the book where Sam Adams is highlighted. I wait for everyone to come on board. You see, even opening textbooks and finding page numbers can create momentary chaos in a room full of nine and ten year olds.

“Ok,” I finally say. “Samuel Adams’ cousin, John, called Sam “a plain, simple, decent citizen of middling stature, dress, and manners. The Governor of Massachusetts, a loyalist, called him the most dangerous man in Massachusetts. Boys and girls, Sam Adams is the name of a beer.” Looks of ‘I told ya’ sos’ are flashed around the room. “Our job right this minute is to reread about Sam and figure out what he did to get a beer named after him.”

We learn that after graduating from Harvard in 1740 Samuel Adams studied law, and worked as a clerk and merchant. He managed a brewery before being elected tax collector.

That tidbit of knowledge causes some titters. One of the most important tax protesters actually had collected taxes. We read on and learn more.

I stop our process of reading and tell students to remember this. I tell them in a few days we will talk about the Declaration of Independence and I will ask them to remember Sam Adams’ pamphlet.

Samuel Adams played an important role in the first actual battle of the Revolution. The British soldiers began to move against Lexington and Concord because they had information that John Hancock and Sam were there with a store of weapons. Luckily they were warned.

We talk about what we just read and identify the qualifications that could get a beer named after you. We then discuss which is more important, having a beer named after a historical figure or the contributions of that person. We decide the contributions are more important, and we discuss why the beer company would want to have a famous name attached to it. Having completed our review I inform students it’s time to go. Several hands appear in the air. “Well, what happened at Lexington and Concord?”

“Oh, young grasshopper,” I say in my pitiful ‘Kung-Fu’ imitation, “that’s a story for another time.”

I really like your lesson here. I use Sam Adams as an example to illustrate searching for good websites online to my college students. If you put in Sam Adams the first site you get is the beer site - not a good place to get your historical facts! Its amazing how many students don't know how to properly search for research materials on the Internet. They believe Google's first choice is their first choice....sorry for the vent, but I see that alot...especially on Cleopatra!