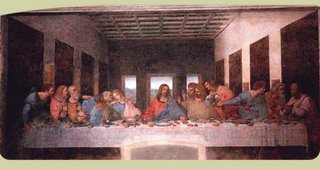 This Friday the movie version of The Da Vinci Code opens. Will I go? I don’t know. I finally bought the book last month when my local Walmart had the book marked down to $4.95. Gee…that sounds kind of redneck, doesn’t it?

I already knew the plot line and many of the “clues” and locations depicted in the novel. I find the whole thing interesting simply because I enjoy a good scavenger hunt. I also enjoy following a historical event, researching it, and attempting to connect events together that might not really be related.

Dan Brown did a masterful job taking a few real historical events, real historical locations, religious teachings, real people, and several theories to string them together to create a great read. Even though I knew the framework of the plot and had prior knowledge regarding the various theories about the supposed bloodline of Jesus I was still unable to put the book down. My main interest as I turned the pages was to see how Dan Brown put the “evidence” together.

I understand my Christian brethren who object to the book. It is hard enough in today’s world to fulfill the Great Commission without wild theories about a bloodline of Christ reaching into the twenty-first century. I understand how people who don’t know much about Christianity other than the bad press the Catholic church has received regarding abuse of children at the hands of priests would see the “evidence” referred to in the book as yet one more nail in the coffin to convict the Catholic church of wrongdoing. I mean they haven’t exactly put out a good image over the last few years. Other denominations of Christianity have had their issues as well.

It would seem that many Christians are simply afraid of challenges to what has been taught for so many hundreds of years. Many feel that by simply bringing the book into their home they are inviting the Devil by introducing doubt into the foundation of Christianity. Over at Over at Civil War Memory, Kevin Levin writes about the “inability of many to suspend disbelief and play with the ideas [presented in the book] for a short period time.”

I don’t believe the average person can do this. I know many people that still believe that if it is written down and published it is true. They believe the tabloids in the supermarket line. The average person including the average Christian simply wants to be told what to believe. They want a formula for living their life where they can simply plug in variables that fit the formula so they can get on with it and go to the races on Sunday, go play golf, watch American Idol, or drink their 12-pack on Sunday afternoon.

Dan Brown’s novel, and that’s the point here….it is a novel which means it is fiction, ruffles too many feathers. The story upsets the applecart making people face what they truly believe. The average person does not want to think for themselves. They don’t want to research the aspects of the novel and determine for themselves what is proven and what is not. They simply take things on face value. You see…as a Christian it bothers me just as much that my fellow Christians believe simply because a pastor tells them to, or their momma told them to. We are to mature in our Christianity and that means researching things for ourselves. Why were certain books left out of the Bible? How did the King James version come to be? Why do Baptists baptize? What is the Reformation and how does it effect me today? Christians need to know what they believe and why they believe it.

Like I said before I don’t know if I will be going to the movie. Reviews from the Cannes Film Festival are already out and…..well, here’s a teaser I took from a Reuters article linked to by Matt Drudge :

"I kept thinking of the Energizer Bunny, because it kept going and going and going, and not in a good way," said James Rocchi, a film critic for CBS 5 television in San Francisco and the online outlet Cinematical. "Ron Howard makes handsome films. He doesn't make bad ones, but he doesn't make great ones."
One especially melodramatic line uttered by Hanks drew prolonged laughter and some catcalls, and the audience continued to titter for much of the film's remainder.
Some people walked out during the movie's closing minutes, though there were fewer departures than many Cannes movies provoke among harsh critics. When the credits rolled, there were a few whistles and hisses, and there was none of the scattered applause even bad movies sometimes receive at Cannes.

Hmmmm.....considering I waited to read the book until I got it at a rock bottom price I may wait until the movie reaches my local dollar theatre or better yet....pay per view.

I am also a history teacher, but I work in a high school. I also read the DaVinci Code, and I also waited until it came out in paperback to buy it. Like you, I was very interested in the history of it, so I started and finished reading the DaVinci Deception while I was in the middle of Brown's book. I think you are being a little too hard on some of those Christians who aren't so interested in delving into their own faith. You and I are history teachers, so obviously we are interested in this sort of thing. But not everyone is. I used to feel a sense of superiority over people who were like the ones you described. They pretty much accept everything their minister or church tells them. But in the last couple of years especially, I've noticed that some of these people have a faith that is probably stronger than mine, even though it's simpler, and they're more loving, forgiving, etc. than me. I guess I've come to believe that there are just different strokes for different folks. One thing I've definitely learned as I've gotten older is that everytime I start to see myself as a superior person in any way, life finds a way to give me a good swift kick in the backside. It never fails!

Thanks for delurking, Dennis! You make a very good point and one I appreciate. I certainly didn't mean to paint a picture that I think I'm better off than other folks simply because they choose to have a different type of life from mine. Sometimes the written word can convey messages you don't mean and I don't want to doubt anyone's faith. My main point towards the end of my post is this...how can we as Christians convey the message we are directed to without knowing more? There's so much out there that attempts to contradict the simple message of Christianity. Christians need to be prepared to know why they believe what they do.

Believe me EHT, I was not trying to swat anybody. I commented on your blog because I identified so much with your thinking. I read about ten blogs before I came to yours, and yours was by far the most interesting. And thank YOU for visiting MY blog. Since I'm new at this, I'm sure I need you a lot more than you need me.

Thanks for the compliment and my swatting remark over at your site was a feeble attempt to be cute.