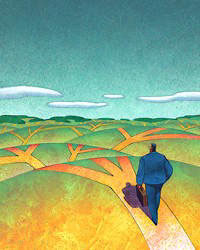 So it was 8:00 p.m. and I thought I’d check my email and then get busy working on a post or two for this blog as well as American Presidents. I have neglected my writing for the last couple of weeks and find myself waking up in the middle of the night and while I’m in the car thinking of things to write. However, it just doesn’t seem to be flowing lately. The ideas are there but the will isn’t. As you can tell from my last few posts I’m simply limping along until our final day.

Anyway….I checked my mail and had a nice “keep your chin up” message from Mike in Texas. Thanks Mike! Then I made a fatal mistake. I pulled up this site. Do you do that with your blog? You know, click on it just to make sure it’s there…that it is loading right, etc or just simply to admire your little space on the web.

There it was… “my blog”, and before I knew it my itchy clicker finger moved over to my links list and began clicking away. There I went down that Internet superhighway just to see what I could see. I’ve discovered that my link list is actually a very large black hole that sucks me in and keeps me from doing what I really need to do. Before I knew it I had lost two whole hours.

I guess we need to do that every now and then. Just sit and read what others have written or what they have found to share. I went around to various folks and read and clicked their links and commented when I felt I had something relevant to say. I found some interesting things. I decided I would detail a few of them here.

ahistoricality shares a link to the Discovery Channel that details their efforts to get the public to phone in regarding a list of the “more recent” seven wonders of the world. A number is provided where you can call in your vote. Since I didn’t have a say the first time around I think I’ll call in my list. I think I would choose Angkor, Cambodia; Easter Island statues, Chile; Machu Piccu, Peru; Stonehenge, Amesbury, United Kingdom; Timbuktu, Mali; Acropolis, Athens, Greece; and of course, Pyramids of Giza, Egypt. It was actually harder than I thought it would be to choose.

Want some information about the world’s wealthiest leaders? World of Royalty links to an article that I found interesting. Reading about the lives of royals was one of the main reasons I became interested in history as a young girl. My high school library had several books by the author Jean Plaidy who wrote historical fiction with actual kings and queens of England and France as the main characters. She also wrote gothic mysteries under the name Victoria Holt. Royal lives whether actual biographies or somewhat fictionalized has always fascinated me simply because of the direct line of succession. How interesting it must be to have your family tree so well researched that there are no gaps….

Mr. Lawrence posted about a student who had to be restrained. The administrator who had to actually do the restraining was hurt. Mr. Lawrence was wondering why the administrator didn’t call the police. In today’s world you are damned if you do and damned if you don’t. If the police had been called administrators would have been called insensitive and would have been accused of taking things too far. Please don’t get me wrong. As a social studies teacher I have many special needs students in my class room every class period. Most attempt to complete their work, listen to me in class, and participate in discussions. Many are verbal learners so they usually ask fantastic questions. Most of the time the special needs students make connections and ask questions that many of my regular education students wouldn’t dream of asking. However, a few special needs students are regularly violent or are so overwhelmed by the stimuli in the regular education classroom that they cannot attend to school work. They speak out accusing other students of looking at them, threatening them, or simply hissing at kids to get their attention. They throw things, walk around the room and pull things out of cabinets or drawers, and from time to time leave the class room without permission knowing I can’t follow them. I document every episode. You would think after a handful of such episodes it would be logically assumed that the regular education classroom is not the proper place for certain students. The students themselves are attempting to tell us they are in the wrong place by acting out constantly. Just yesterday we had a meeting on a young man who has terrorized one of my history classes all year. After utilizing many different strategies I finally got the young man to at least sit quietly in a chair during class around December. However, to this day he has yet to pick up a pencil or attempt to complete any class work. Finally, the science teacher and I were listened to and the student’s time with the special education was increased. But at what cost? The other students in my room were terrorized all year. I was subjected to undue stress every day as I never knew if I would be hit, if another student would be hit by a flying chair, or if we would have the joy of listening to a string of profanity that this young man would let fly at the most inopportune times. Most importantly this troubled student missed out on an entire year of social studies and science instruction because he was in an environment that was not conducive to his needs for learning.

Someone has finally penned a post that gets a big AMEN from me. In the post “The Third Rail” dehavilland very correctly reminds us that parents need to be involved in their child’s education. Now I know the “No Excuses” crowd will say that educators can and do very well without parent involvement but think how much better it would be if every parent worked with their child for 20 minutes-----even if it was simply to go over the school day to see what the child worked on. I sat in a conference last year with a parent who told me it wasn’t her job to read with her child. Her tax dollars were paying me to do that. Meanwhile her child continued to wet his pants at least once a week in my class, sucked his thumb daily ( a ten year old), and had to be threatened with a write up to get any work completed. Yes, I know that that type of behavior can be evidence of child abuse. I did refer it to the social worker and counselor.

Finally, many thanks to Assorted Stuff for posting a link to this site. I have been very concerned with the fact that I can’t access many sites on my school computer including my personal email address. Many educational sites are blocked as well. This blog looks like it will continue to be an interesting read in the future.

Two roads diverged on the Internet superhighway and I chose to meander down that unknown side road. It was an interesting three hours.
Posted by EHT at Saturday, May 06, 2006

I tend to drift when I'm on the net, too. I agree with a friend: there's way way way too much information, and for we small unfortunate few with OCD and a hunger for knowledge, it becomes oppressive.

I don't remember how I lived before the 'net, and I'm not sure it's better that we have it, but it's here and that's all there is to it! ;-)

I love to see what else other have written. I first found your site by clicking a link at another site. I've added you to my blog links too.

We are all in this together regardless of the state or country. I feel stronger knowing I'm not the only one. I've gotten GREAT ideas to try, and I feel strengthened all without leaving the confines of my class or home.