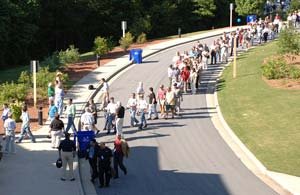 The traffic was awful. The crowd built to a point of 4,500 before the fire marshal had to order the doors closed. Estimates indicate there was just as many people turned away than actually made it into the auditorium.

I know over 62 million viewers watched American Idol, but here in Atlanta 4,500 people attended a fair tax rally sponsored by talk show icon Neil Boortz. Those who didn’t make it in the door got to hear the rally over the oldest radio station in Atlanta, WSB radio (AM750), which airs Boortz’s program daily. Comcast cable filmed the rally and will be airing it on a pay per view basis.

I didn’t get to go, though I would have like to. I am a fan of Mr. Boortz and generally listen on days I don’t teach. I don’t always agree with him. I think he is way too hard on teachers, but he makes valid points on many issues and he certainly isn’t afraid of speaking his mind. Back when I was a paralegal Mr. Boortz was an attorney and my law firm had a few dealings with his.

While I was carting my thirteen year old back and forth to pick up new shorts (longer ones please, not the kind that don’t even have a crotch) for a trip to Myrtle Beach and getting her to and from church (can’t miss that youth group, you know) I got to listen to the rally. There were some wonderful rousing speakers including Sean Hannity from Fox News and Atlanta’s own Herman Cain. What was really inspiring to me was the sound of the crowd. I had been afraid that Boortz’s Fair Tax rally might flop. What if hardly anyone showed? I’m glad my doubts didn’t come to fruition.

As I listened to Herman Cain I thought about our Founding Fathers and how they were able to give birth to a country considering that most colonists didn’t really care one way or the other. It took several events and situations to occur before longings for liberty ignited, and I think it will be this way again. People are fed up, but few Americans want to take the time to really examine an issue. Few people want to get out of their comfort zone. They prefer others to tell them what to think by listening to the constant stream of sound bytes and text bytes that permeate our lives today. They prefer things as they have always been simply because they have always been. Sounds like education, doesn’t it?

So what is the fair tax? Fairtax.org explains it this way:

The FairTax was created by first asking the American people what they wanted out of a tax system, and then having a team of respected economists design a tax system that met those demands. The FairTax replaces the income tax and all other federal taxes with a national consumption tax. The FairTax is levied only once, at the point of purchase on new goods and services. The simplicity of the FairTax frees Americans from our current overwhelming tax code and unshackles the U.S. economy.

The fair tax has gotten some publicity from a book written by Neil Boortz and Congressman John Linder. You can look it over here. I think we all owe it to ourselves and to each other to examine this issue on our own and make a decision to support it or not to support it. We need to get out of our comfort zone and make our opinions known to our lawmakers and policy writers. This thing might just ignite and either you will wake up one morning and find yourself in a new tax system or a fire will have been snuffed and you won’t even realize it had passed.
Posted by EHT at Thursday, May 25, 2006

In order for Fairtax to take off in this country, we need to elect proven leaders who are willing to go to Congress and bring about discussion on the issue. We all need to become active in our communities, write our Congressmen, and choose representatives who will go to Washington and make a difference. One of the most exciting battles for a Fairtax conservative is in the Kansas 3rd District. Although Republicans have a voter registration advantage, the incumbent Congressman Dennis Moore has hung on in the district.. This year, candidate Chuck Ahner, a strong supporter of the Fairtax, and a Westpoint candidate has the consensus of the KS GOP behind him and is hoping to upset Moore. If you want to make your dollars matter this election season that is one race that will be very exciting. His website is www.ahnerforcongress.com

Thanks for the information. I agree that we all need to be more proactive contacting our congressmen. That was one of the things brought up at the rally. Neil Boortz, Linder and the FairTax.org folks made sure those in attendance had the necessary information to contact their people in Congress.