Well, I Do Declare! Another copy of the Declaration Has Been Found 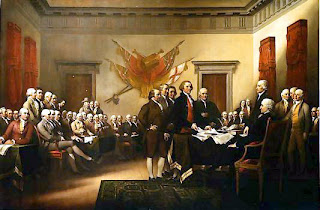 The painting presented here is John Trumbull’s Declaration of Independence currently housed in the U.S. Capitol. Many believe the painting/mural depicts the signing of the Declaration, however, notice the group of five men standing before the main table in the room. These five men---Thomas Jefferson, John Adams, Benjamin Franklin, Robert Livingston, and Roger Sherman---are known as the Committee of Five. Their job was to draft a resolution in reaction to Richard Henry Lee’s call for independence. 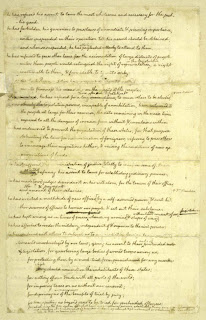 e participated in the revision process. Benjamin Franklin made over 40 edits alone. The Trumbull painting depicts the Committee of Five presenting the final draft of the Declaration of Independence for the approval of Congress. I always enjoy teaching my students about the Declaration of Independence because they hate to edit their own writing. They think about it a little differently once I show them pictures of the edited copies of Jefferson’s work.

On the evening of July 4th a handwritten draft of the Declaration of Independence was signed by John Hancock and Charles Thompson signifying the document had been adopted by the Congress. It was then taken to the printshop of John Dunlap where 150-200 copies were made. These copies are commonly referred to as Dunlap Broadsides and there are only 25 of them left in existence. The most recent broadside copy that has been found was bought by Norman Lear for $8.1 million. It travelled the country for sometime. Luckily I was able to take my daughter to the Carter Presidential Library where I was able stand in front of the “Lear” copy and read it line by line.

The Declaration of Independence was copied again by Mary Katherine Goddard on January 18, 1777 when Congress ordered the document to be more widely distributed. The Goddard copies included all of the signatures instead of just two.

Another original copy of the Declaration of Independence has been found!

Click on through here for the very interesting story involving my own beloved state
Posted by EHT at Saturday, January 20, 2007

This is a tremendous discovery!

One question though: Is there a map on the back of this one?

This would be cool to act out in the classroom and photographing it along the way.

No, Tour Marm....I think they looked at the back first and more than likely they tried that "lemon juice" thing as well.

Your right DAPFD....it would be cool to act out the committee's revision process and their presentation to Congress.