John A. Quitman: From the Halls of Montezuma

John A. Quitman is one of those American citizens who left his footprints across many different aspects of United States history, however, very few people today know his name.

He’s the type of man from the early 1800s whose life can be used to teach backcountry settlement, planter philosophy, and political machinations from Manifest Destiny through the election of James Buchanan. Those machinations include a rabid belief in state’s rights, the annexation of Cuba, and Congressional actions during the mid-1850s…a very turbulent time.

Quitman began life in New York and, after settling on a law career he headed to Natchez, Mississippi along with his friend John McMurran to see what the richest city in America had to offer two young blades. He quickly joined many different men’s organizations including groups against dueling and gambling. He and McMurran both married into the very wealthy Turner family by wedding sisters. McMurran and his wife lived at Melrose….I’ve written about it here. Quitman and his wife eventually settled at Monmouth one of the oldest homes in Natchez, and one of the most beautiful bed and breakfast inns there today.

If you haven’t guessed yet John A. Quitman is the owner of the hanky I posted for my wordless entry this week. The story goes that Eliza Quitman made the hanky for her husband and gave it to hi

m as he left for war. Notice how large it is. Apparently the hanky wan’t only good for blowing his nose…..Quitman also used the hanky to signal his men on the battlefield. Doesn’t this make perfect sense? There were no cell phones or telegraph during Texas Independence or the Mexican American War. What better way for Quitman’s men to spot him on a chaotic battlefield? It sounds like a good story, but I haven’t actually found any hard evidence to support it. It is proudly framed and placed on the wall at Monmouth and holds a prominent place in the tour.

The Mexican American War was the first test of Manifest Destiny. It was caused by a desire Americans had to expand westward to the Pacific Ocean. Manifest Destiny did not sanction violence, but it did not take into account that hundreds of people were already living in the western territories. In 1835, the U.S. offered to buy California from Mexico for 5 million. It was refused. In 1845, 25 million was offered but refused. Another cause of the Mexican American War was the annexation of Texas. It was a slap in the face for Mexico….They were still stinging from the fact they had lost Texas to begin with. Borders became a hot-button issue and, Mexico threatened war. Without getting too wordy here once the war began Quitman was one of six brigadier generals apppointed by President Polk to command voluntary regiments. He didn’t let anyone down.

By the time Quitman was commanding men at war he had already studied at seminary, acted as a tutor in the classics at Hartwick Seminary, and served as a professor at Mt. Airy College. He had practiced law, served as a trustee of the academy and state university for Mississippi, and served in the Mississippi state legislature. For a time a quirk in state law allowed him the governorship, in 1836 he raised a body of volunteers to help the Texans in the fight for their independence, and as a “sideline” he owned four large plantations though they were not all developed and op 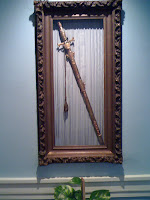 erating at the same time.
Once in Mexico Quitman seemed to be everywhere. He immedately reported to General Zachary Taylor at Carmago and was noticed when he fought at the Battle of Monterey when he successfully assaulted Ft. Tenerice before advancing into the city. During the siege of Vera Cruz Quitman led an assault against Alvarado along with the naval forces of Matthew Perry (yeah, that Matthew Perry). He was also at Puebla where his actions led to him being brevetted major-general and eventually he received a sword from Congress that is shown at Monmouth today. The sword is one of only fourteen swords ever awarded by Congress.

Quitman’s war contributions are best remembered from the Battle of Chapultepec where the castle was stormed on two fronts. Quitman eventually entered Mexico City by the Belen Gate. The picture posted below shows Quitman leading Marines into the city. Notice Quitman is missing a shoe.

The following is taken from The Aztec Club website which is the original organization of men who fought in the war. Quitman was their first president. At the website it states:

In his classic two-volume work, The War With Mexico (Macmillan Co., NY. 1911), Justin Smith, perhaps the pre-eminent historian on the Mexican War, wrote:

“When the first thin streak of dawn glimmered forth behind the gray volcanoes, and our cannon at Belen Gate garita were on the point of opening fire, a white flag and an invitation to enter the capital reached Quitman. First, making sure there was no deception, he advanced; and after stopping about half an hour at the citadel he moved forward under a splendid sun to the grand plaza, which fronted the palace and cathedral, with [Persifor] Smith’s Brigade, the Marines, the New York volunteers and Steptoe’s battery.

As a triumphal procession the command looked rather strange. Quitman and Smith marched at its head on foot---the former with only one shoe; and behind them came troops decorated with mud, the red stains of battle and rough bandages, carrying arms at quite haphazard angles.

No less astonishing looked the city, for sidewalks, windows, balconies and housetops were crowded with people. Except for silence, the countless white handkerchiefs and the foreign flags, it might have been thought a holiday. Before the palace, which filled the east side of the plaza, the troops formed in line of battle. Officers took their places at the front, and when Captain Roberts hoisted a battle-scarred American flag on the staff of the palace at seven o’clock, arms were presented and the officers saluted.

Soon, loud cheering was heard. A few squares away the commander-in-chief, escorted by cavalry with drawn swords, had reached Worth’s command, which had stopped at six o’clock by orders opposite the high ash trees of the Alameda. A clatter of galloping hoofs folllowed; and in another moment, amidst the involuntary applause of the Mexicans, General Scott, dressed in full uniform and mounted on a tall, heavy bay charger, dashed with his staff and Harney’s dragoons into the grand plaza—his noble figure, gold epaulets and snowy plumes, resplendent under the brillant sun, fitly typifying the invisible glory of his unkempt and limbering army…

Some sources state that Quitman is the only American to ever rule from a national palace. Also, the actions of the Marines at Chapultepec is what earned them the line “from the halls of Montezuma” in the Marine Anthem (I wrote about "the shores of Tripoli" here).

Once Quitman returned to Mississippi he was governor once more. In 1856 he was named at the National Democratic Convention as a possible vice president nomination, but was not nominated. He served in Congress where he claimed states had the right to secede. He is also credited with being one of the first to bring up the idea of the Confederate States of America. Quitman’s work came to an end tragically after attending a dinner for James Buchanan. Poison was suspected after several men fell ill. Quitman lingered for sometime but eventually died from what some state was National Hotel Disease.

When you say "Hartwick Seminary," is that John Hartwick's seminary founded near Cooperstown, NY?

Hi Matthew! I never saw a town listed for the seminary....I'm not even sure if he finished or not. Quitman's father was in the clergy and that's the main reason he was persuaded to go. The Aztec Club bio states Hartwick was located in Otsego Co.,NY. If that is where Cooperstown is located then I would guess it is the same.

Thanks for such a prompt response!

Hartwick Seminary was founded by John Christopher Hartwick in 1797 - it was the first Lutheran seminary in the United States. The Seminary was located in the town of Hartwick, NY, which is just a few miles from Cooperstown [they are so close that I live in the Town of Hartwick but my address and phone number are both Cooperstown].


The original Seminary evolved into Hartwick College, a small non-denominational liberal arts school located in Oneonta, NY [www.hartwick.edu]. There will most certainly be some people in the area who find Quitman's story worth knowing/retelling.

Cooperstown is, undoubtedly, more famous, between William, James Fenimore and baseball. The interactions between William Cooper and Hartwick were interesting - they shaped the settlement of Upstate New York. Though I am not always a fan of Wikipedia, the entry for Hartwick sums this up well: http://en.wikipedia.org/wiki/John_Christopher_Hartwick

Alan Taylor, a fine scholar who taught at my alma mater Boston University and who I believe is still at UC Davis, wrote a Pulitzer Prize-winning tome called "William Cooper's Town: Power and Persuasion on the Frontier of the Early American Republic" that details this period with excitement and, most importantly to me, accuracy. It is worth a serious look.

Many thanks for this feature - I look forwarded to passing along Quitman's story in this area.

Great info on the seminary. Thanks! You might also be interesting in knowing that his birthplace has been preserved in Rhinebeck, New York. The website is http://quitmanpreservation.org

There you can find out some more info about his father.

One of my fourth Great Grandfathers fought with the First Tenn. in Northern Mexico during the War with Mexico, under Quitman. They earned the nickname, the "Bloody First" and fought their way into a Mexican fortress at the Battle for Monterrey. My ancestor returned home from Mexico with the rank of Sgt. and invalid; he apparently suffered severe heat stroke/exhaustion and lost a good deal of his vision.

He later moved from TN to MO., and his home was burned out by "Confederate" raiders from Arkansas on Christmas Eve, 1864. My Mom inherited a kettle that was one of the few things they had left.

Hi Polski! Hope you make sure no one throws your kettle out as a piece of trash. Thanks for letting us know about your personal connection to John Quitman.