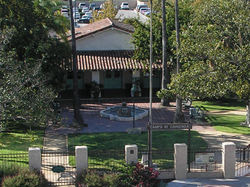 This is an important home in American History. The first hint is that it is not the home of an American president.

What happened on this piece of property?

You can learn more about Wordless Wednesday HERE

Is that a tile roof? That might give a clue to where it is.

I will definitely be looking forward to the explanation, I cannot guess.

I haven't any idea!

I would guess it is in either Florida or Southern California and there is a Spanish/Hispanic connection.

It is a tile roof and the house is not in Florida.

I have no idea, but I will be back to find out!

It looks familiar, but I don't know what happened there! Is it recent history?

We are still clueless. Guess we have to come back later! hehehe

It looks like it's in California. I have no idea!

Thanks for sharing your pic, though!

No, Alison. The event that happened is not recent history.

The World In The Eyes Of Brothers said...

What a beautiful house, I love the garden, so peaceful.

Was it once part of the Mary rose :)

Nice house - but haven't a clue what happened on that piece of property. Happy WW

I have no idea but would love to know. Happy WW

I was thinking Jimmy Carter's childhood home, but you said no president. Hmmmm.

I guess I need more hints. I don't know. It's a cool property though.

It's not a mission, too late for that.

I think it might have to do with the Mexican War era and subsequent statehood of California. It is military. Was it used as a hospital?

Ahh man, just like a teacher to make us think! No idea, help!

No mission. No hospital. No battle.

It is California, and the correct era is the Mexican American War.

I am clueless. Maybe California? The LaBianca Tate houses?

Okay...I have no idea!!! Will have to come back for the answer! Happy WW!

Way to make us think! I have not a clue!

Making us think??? I am going to go way out there and say Marilyn Monroe's home.???

Is this Sherman's Headquarters (when he was Quartermaster - Customs House) in Monterey?

"It is California, and the correct era is the Mexican American War."

*goes to look up history*

the Book of Keira said...

It is the location of the great nacho battle of 1797.

That's a pretty cool house but I'm sorry I'm not from America so I don't think I would have any hint at all.
Mine is up too.

I was going to try to cheat and see if you had named your photo...no luck and no clue. Now if it was Texas history, maybe I could give it a shot!

No clue... so sad with having visited so many sites.

Isn't it time for summer vacation?? But you're still making us learn something! Ha

I have no idea, so I guess I'll be back later to find out!

Is it the Rancho Chino Adobe, where the Battle of Chino was fought?

Let's recap what has been discovered. Something important happened on the land where this structure stands. The structure is not the original to the site, but is a replica to what was once there. The event is from the Mexican-American War. The roof tiles and style of the structure led to some correctly stating the event had something to do with California.

New Hint: Notice the fence, the flag, and the cars behind the structure...some sort of parking lot perhaps. Apparently this place is a park of some kind today. Actually, thousands of people drive by this place everyday and most do not know that many historians consider it to be the most important place in American history west of the Mississippi.

Go forth and discover if you dare!

I have not a clue. But big kudos for inspiring thought and historical searching.

Be well and enjoy the day.

FYI - I thought it was another view of the photo on the very bottom of this post: http://www.militarymuseum.org/Monterey.html

Does it involve Larkin, Vallejo, or Alvarado?

Or does the parking lot represent the first Walmart in California? (Tongue in cheek.)

No Larkin, Vallejo, or Alvarado.

Something to do with the Bear Flag Revolt?

(Interestingly enough, I am designing a California History tour in Sonoma, Monterey, and Salinas (with Steinbeck content) for my Alaska school as I write this.)

Well that was difficult and fun. Learned a lot about California history I did not know.

It's Campo de Cahuenga. The site of the Treaty of Cahenga which ended hostilities between the US and Mexico in California. It was signed in 1847. The later Treaty of Guadalupe Hidalgo ended the war and ceded California to the US.

My fellow Georgian, Griftdrift, got it exactly. Way to go!

I'll be posting more about this interesting place later.

No one but you has attempted any of mine, but I have had several hits from Georgians! (Thanks!)

Wow, great job! I can't even imagine TRYING to figure that one out! (not a history buff)
Its very pretty, though!