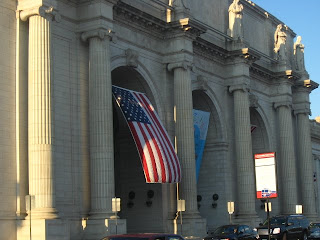 One of the first places we headed upon arriving in Washington D.C. was Union Station where we gawked at the architecture, ate a great dinner, and listened to the rumble of trains arriving and departing. It was a great visit.

1. Union Station was designed by architect Daniel Burnham and is considered to be one of the finest examples of the Beaux-Arts style of architecture. 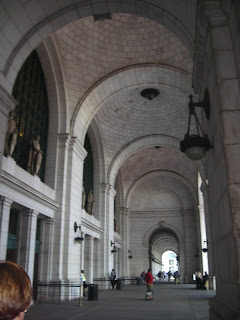 2. When it was completed in 1908 Union Station covered more ground than any other building in the U.S. and was the largest train station in the world.

3. Today the area around the station is covered with busy avenues, pedestrians, and cars going in many different directions. In 1908 when the station was finally completed it sat on the edge of an area known as “Swampoodle”which was basically a shantytown on the banks of Tiber Creek which has been described as “sewery.” 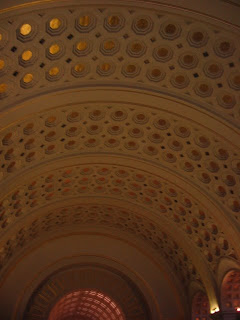 4. The station is so large that the Washington Monument could lay on its side within the concourse.

5. The 96-foot barrel-vaulted, coffered ceilings contain 22-karat gold leaf and the total cost for Union Station was $125 million including the tons of white granite used in its construction. 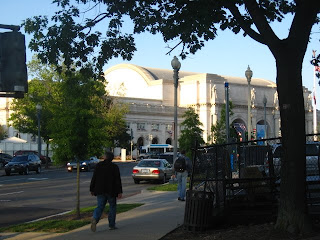 6. During its heyday Union Station was described as a city within a city. A bowling alley, mortuary, baker, butcher, YMCA, hotel, ice house, liquor store, Turkish baths, first-class restaurabt, nursery, police station, and a silver-monogramming shop could all be found on the premises.

7. B. Smith’s Restaurant can be found in the old Presidential Suite that was added to the station. President Taft was the first president to use the room as he waited to depart from Union Station. The station website advises many other important people also used the Presidential Suite over the years including King George VI and Queen Elizabeth of Great Britain, King Albert I of Belgium, King Prajadipok of Siam, Queen Marie of Rumania, and King Haasan II of Morocco. President Eisenhower was the last president to utilize the suite for travel purposes, but in 1989 President George Bush used it during an Inaugural Ball. 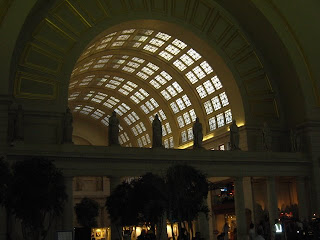 8. Following the death of President Franklin Delano Roosevelt his body was returned to Washington D.C. via a funeral train that crossed the Potomac and backed into Union Station.

9. In 1953, an out of control Federal Express Train crashed through a newsstand and into the main concourse. No one was killed. 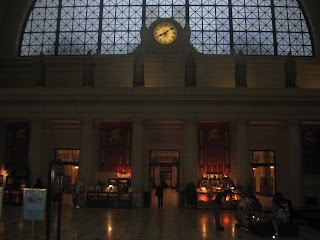 10. By 1968 more people were traveling by air than by train so a decision was made to transform the station into the “National Visitor Center”, but by 1978 the center closed due to low attendance.

11. The building soon fell into disrepair….rain damaged parts of the roof and toadstools began to grow inside the building. The fungus was so out of control that the building had to be sealed in 1981. Would Congress save the building or bulldoze it? 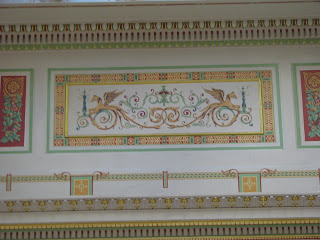 12. Later in 1981 Congress enacted the Union Station Redevelopment Act of 1981 which called for the Department of Transportation to come up with a plan for the commerical development of the station so that it would be financially self-sufficient. Through public and private partnerships the building was restored to its original state and a mixed use transportation center was created at the cost of $160 million

13. Today over 130 unique shops and restaurants fill the station. Amtrack uses the station for its headquarters and executive offices as well. The station is one of the most visited destinations in Washington D.C. with over 32 million visitors a year. Within the station you can find exhibitions, cultural events and private events such as the Presidential Inaugural Ball. Citywide galas are also held at Union Station.

Wow. So much I didn't know about Union Station. Thanks for the history lesson.

Beaux Arts is one of, if not my most, favorite styles =)

Great, great post!
This is one building that will always be worth preserving.

Have a great TT

Thanks for visiting everyone.

Drilleraa, I agree. We were in awe as we walked around. Who could every even conceive an idea that would demolish this beautiful building?

Unfortunately, Union station has been sold and we're all waiting to see how the new owner will transform the station to his vision. The first casualty is said to be the food court, once the most thriving one in the city.

While I realize that this is a 'G-rated' blog, there are signs throughout the great hall proclaiming that 'modesty shields' had to be placed in front of all Saint-Gaudens' anatomically-correct statues of Roman Centurions. Imagine 40+ eighth-graders craning their necks...!

That is a real shame it has been sold.

It's not just 8th graders craining their necks.....I tried to see behind the shields too! :) My
10th grader was a bit interested as well.