It's the Teachers, Stupid! 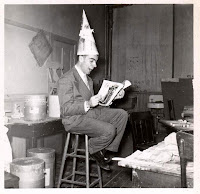 As many of you know I began another blog sometime ago that is focused solely on my homestate of Georgia and blogs authored by folks from the Peach State. Recently the 38th Carnival for Georgia Bloggers posted at Georgia on My Mind, and one post in particular stood out for me on a personal level.

Ethan over at Never Clever Whatsoever has just completed the 8th grade and has just survived Georgia’s mandated CRCT testing. While many education-types have opined their opinion regarding why approximately 70% of Georgia’s sixth and seventh graders failed the social studies section Ethan has articulated in his words another rant about Georgia's CRCT Scores that is in strong contrast to the same educrat excuse of, “Well, we rolled out these new standards…..”

I left two rather long comments for Ethan, and he decided others should see our conversation, so he posted replies to my first and second comments where he recreates my comments and his responses.

I strongly encourage educators to take a moment and head over there and let Ethan know what you think.

While I have never been one to outwardly criticize a colleague regarding his or her teaching style I cannot fathom an 8th grade student taking the CRCT and not knowing why the names Hartsfield and Maynard Jackson are attached to one of the busiest airports in the world!

Yes, as I mentioned in my comments there are many, many reasons why students would do poorly on an assessment, but Ethan doesn’t appear to be the kind of student we would dread to have in our classrooms.

The 8th grade Georgia standards that were in effect during Ethan’s school year can be found here. Standard number SS8H10 states the student will evaluate key post-WWII development of Georgia from 1945 through 1970 with element b. going a bit futher to state explain how the development of Atlanta, including the roles of mayors William B. Hartsfield and Ivan Allen, Jr., and major league sports, contributed to the growth of Georgia. State standard SS8H11 states the student will evaluate the role of Georgia in the modern civil rights era with element b mentioning the election of Maynard Jackson as mayor of Atlanta. Gee, isn’t that clear as a bell? Wouldn’t these men and their actions be at the forefront of your lessons regarding this time period?

There it is…..current standards every 8th teacher should have in their possession and mentioned by name are two individuals students should know. If that’s not enough to convince a teacher to mention these two men state standard SS8G2 mentions the role of the Hartsfield-Jackson International Airport and its impact on the state’s economy. Wouldn't this standard be a great opportunity to reinforce who Hartsfield and Jackson were?

Since the 1960s and 70s are usually taught later in the year it would be easy to say that Ethan’s teacher just simply ran out of time. We all do that, and we all say that’s the reason students did poorly on a state test, but Ethan also brought up the name Mary Musgrove in Georgia history, and she would have been taught early in the year and yes…..the standard involved (SS8H2a) mentions her by name and asks the student to explain her importance.

Ethan’s experience bothers me greatly. While we as educators can sit around the table and plan units and lessons, while we state we have an understanding of the standards and have included all of them in our plans, and while we have the standards clearly referenced in our plan books for any observer to check off when they stop by the classroom clearly some of us are walking the walk, but not talking the talk. Now I can understand a colleague blowing off things like various required teaching strategies from time to time, but blowing off the standards where it is very clear what students need to know for that grade level I can't even fathom. Aren't the standards the foundation of every lesson? Don't we start with the standards?

Clearly…when the door is closed something else is going on, and it’s not teaching the standards. What’s it going to take? Weekly visits to the classroom to listen to lessons, to interview the students, to actually hand some teachers a scripted lesson plan to make sure the standards are taught?

My title is a bit harsh. I know there are a myriad number of reasons why the damn tests don't work, but here we have a student who knows he wasn't taught specific key material to the subject matter, and there simply is no excuse.
Posted by EHT at Monday, June 23, 2008

You're absolutely correct: teachers need to share some of the responsibility. I know I like to blame everything on NCLB, but it also is up to me to make sure I cover the North Carolina Standard Course of Study, standardized tests or not.

As you point out in your discussion with the precocious Ethan, there is no excuse for not teaching what you're told to teach. In my case, there are no specifics; I have a general outline of content, but it is up to me to choose which pieces of literature my students will learn. But if I was told to teach The Scarlet Letter, then I'd have to teach The Scarlet Letter. If I worked at McDonald's and had to ask if people want fries with their order, then that's what I'd do. If nothing else, you follow the directions set forth from your boss.

Thanks for visiting my blog and commenting!

I'd like to add this: I have learned who all this people are on my own. I looked for them on the Georgia Encyclopedia, and now, I believe I know the standards very well, although it may be a little too late.

I'm so glad you agree with me. I think it's a bit ignorant to not know that you're supposed to teach the standards.

And thank you for writing this post. My page views are rising everyday thanks to you.

Maybe because I came to teaching late , and have only 7 years experience, but I can't imagine teaching anything other than the standards. Personally, as a new teacher, the standards were a lifeline. They were a map that I could follow, and if I did, then my kids should be ready for our Big Deal State Test. My district even makes it easier by having teachers work every summer on a pacing guide and scope and sequence, so we are all on he same page. It also helps our kids who are rent-jumpers - they don't miss anything.

I've never known teaching without standards so they're incredibly easy for me to appreciate.

The problem is a lack of supervision holding people truly accountable--oh, and laziness.