A Wordless of Sorts: Negro with a Hat 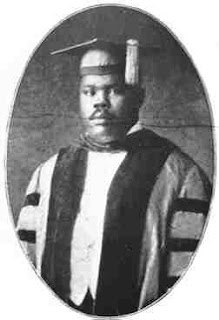 Last Fall I posted an image of finely dressed men and allowed readers to guess who the man on right was. Later I posted an explantion regarding the very flamboyant Marcus Garvey and the UNIA.

The image posted above is one I did not use in the original postings.

Recently I became aware of a new book called Negro with a Hat: The Rise and Fall of Marcus Garvey

A review at The New Yorker states, In 1914, on a ship between Jamaica and England, an impoverished twenty-six-year-old named Marcus Garvey had what he later called a vision of "a new world of black men." Six years later, he rode through Harlem in regal robes and a plumed bicorne, and was proclaimed the Provisional President of Africa before a crowd of twenty-five thousand in Madison Square Garden. For a short, spectacular time, before his movement collapsed under the weight of its ambitions and schemes (a mail-fraud conviction resulted in exile in London), Garvey’s call for a transnational union of black people electrified crowds around the world—alarming J. Edgar Hoover and maddening W. E. B. Du Bois, who recoiled at Garvey’s separatism and his theatrics, wondering if he was "a lunatic or a traitor." (Garvey called Du Bois a "lazy dependant mulatto.") Grant’s biography ably captures the Garvey moment, although, perhaps wisely, he leaves the many contradictions in Garvey’s character unresolved.

Another review from The New York Times can be found here.

Garvey is an interesting character in Black history many students never, NEVER hear about, and I’m not really sure why not…..I mean look at the cover of Mr. Grant’s book. How intriguing!

What student wouldn’t want to know more about the guy in the Captain Crunch hat?

Run…don’t walk to pick up a copy of Colin Grant’s book so you too can add Marcus Garvey to your parade of interesting historical figures.

And don’t forget to visit other blogs participating in Wordless Wednesday
Posted by EHT at Wednesday, June 18, 2008

When thinking about it,
what a view we had at that time.
Chocking.
Therefore this is a great WW entry

Thanks for visiting. Come back soon.

i didn't scroll down right away in my feeder and the great thing is I recognized him without your comments. Thank you for making me feel smart today. LOL!