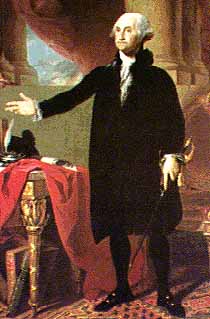 One of the first posts that I published on this site that gained some notice was George, We Hardly Knew Ye. In the post I relate several myths and non-myths regarding our first president. A myth that has apparently gained mythological proportions is whether or not our first president said the words ‘so help me God’ at the end of the oath.

The saga continued as I was contacted by a reader named Casandra. Further information prompted me to post So Help Me God and nearly a month later Mythbusting 'So Help Me God'.

The great Mr. Bell over at Boston, 1775 (I love his site!) also has had some interest in this issue as well as others who participated in a discussion group at H-net.org. You can see Mr. Bell’s post here and follow his link to the discussion group.

As I previously posted back in the spring my class emailed the Library of Congress regarding their research on this issue. Very little information was obtained from the LOC which was sort of surprising. Recently I obtained a digital copy of an email from Dr. Juretta Jordan Heckscher, an official with the Library of Congress, to the aforementioned discussion group. Here it is:

Re: Presidential oath "so help me God" This is in reply to Barbara Clark Smith's very interesting inquiry aboutSmithsonian NMAH curators' attempts to find out when and by whom the phrase "sohelp me, God" was added the presidential oath of office prescribed by the Constitution. Reference specialists on the Library of Congress's Digital Reference Team have done some research on this topic. In particular, my colleague Kenneth Drexler reports the following information: "The question was whether or not there is primary-source evidence thatWashington said 'so help me, God' in 1789. The short answer is that I could find no evidence that he did. [Also,] according to a Washington Post article from [January 20,] 2001,'Whether Washington actually added "So help me God" to the oath is not supported by any eyewitness accounts, according to Philander D. Chase, editor of the Papers of George Washington project at the University of Virginia. "He may have said those words," Chase said.' During my research I did obtain a copy of a letter by Tobias Lear to GeorgeAugustine Washington dated May 3, 1789 in which he described the inauguration. I got the letter from Duke University. The letter makes no mention of 'so help me, God.'"

Recently a source advised me concerning an inaugural exhibit at the Mt. Vernon Estate and Gardens. George Washington’s oath of office is printed in front of the inaugural exhibit and it notes ‘So help me God’ appended to Washington’s oath. Another card with an asterisk in smaller sized print read, “Scholars debate whether Washington added these final words to the oath as set forth by the Constitution. Most modern-day Presidents include these words and think they are following in Washington’s footsteps.” My source has it on pretty good authority that someone high up in the organization insisted on the vagueness of the wording instead of correctly noting there is no proof. This same person also decided to keep the myth intact that George Washington turned down a chance to be king as well.

I guess some myths are just too hard to let go.

I believe after looking at various sources that have been provided to me I feel fairly secure in the knowledge that there is to date no proof George Washington uttered the words ‘So Help Me God.’ We can safely chalk the issue up on the myth side of the tally board…..for now that is……history has a habit of coming back and biting us in the fanny as new things are found. I won’t hold my breath, and I’m certainly not going to keep looking for a needle in haystack.

Perhaps this can be my final word on the matter.

Should I take an oath to that effect?

Did God really help some of the presidents who said "so help me God" at their inauguration? If so, then I must confess that I'm more than a little disappointed in the Almighty!

The intent of the words as a form of prayer would be calling God as witness, not a prayer of petition.
The one taking the oath is vowing before God to fulfill the oath just taken and asking God to be witness.
A prayer of petition would be asking God to do everything just pledged in the vow.
It can be argued that in a prayer of “witness” that the supplicant is asking God to "make up for what ever is lacking", but this is invalidated when the words were used as the final phrase for a person about to give legal testimony.
Did George Washington hope and pray for the assistance of God in his presidency? There seems to be sufficient evidence to say that he did. So whether he uttered the words at the oath or not, he most likely "prayed in his heart" that divine providence would guide him.

King Cas I most certainly would hope that he at least did pray in his heart.....we just don't have sufficient proof that he uttered those words as portrayed in movies and even mentioned in textbooks.

Video tape sure would solve the problem.