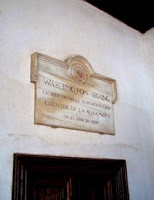 You know the old saying, “Washington slept here”, don’t you?

So many places over the years have tried to cash in on the George Washington name that if he actually slept in all of the places people claim it’s a wonder we won the Revolution.

However, I’m not referring to George Washington in my title. Instead my subject matter is Washington Irving, the American author and one time U.S. ambassador to Spain. Just like his namesake it seems he has a plaque as proof he slept somewhere as well....

Last week’s wordless image was correctly identified by Grift Drift. The structure was indeed the magnificient Alhambra Palace in Spain. Washington Irving was the connecting factor between the Alhambra and our own history and literature. Irving actually resided in the Alhambra for a time while he was doing research for some of his writing including a book about Columbus. Many history scholars point to Irving’s work concerning Columbus as the basis for the very incorrect idea that the first voyage of Columbus was an attempt to prove the Earth was round. Irving is also one of the original sources for the whole "so help me God" issue I’ve written about before.

You can find out more about Washington Irving and his home named Sunnyside if you wish.

Though it may not always fit with the school system’s prescribed flow of content I generally preview American folklore with students during the second half of October using my Language Arts class to introduce Social Studies topics to students.

Halloween is the perfect time to lose ourselves in the stories of Rip Van Winkle and The Legend of Sleepy Hollow by Washington Irving.

Irving traveled greatly and it would seem he was most inspired to write about America when he was away from it for long periods of time.

Once when I wrote the term "romantic history" on the board I heard giggles, twitters, and rustlings throughout the room. I smiled and said, “Ok, what’s got everyone excited?”

One young lady volunteered, “Well, what’s so kissy-kissy about history?”

“Who said we’re going to talk about kissy-kissy?” I responded. I ended my remark by making loud kissy noises with my mouth. Several young men responded with choruses of “Ugh!” and “Gross, man!”

“Ok, first of all we are not talking about the history of love but a treatment of history.”

The boy in the front row raised his hand. “Treatment? You mean like a doctor?”

“No, I’m not speaking about a medical treatment. Ok, folks. Let’s back up a bit and let’s put our historian hats on,” I say as I mimick placing a hat on my head.

We enter a discussion regarding point of view and how we can all experience the same event but would remember it differently. We discuss the explorers and their point of view in constrast with the point of view of Native Americans. I explain to students that try as we might people who record history do not always provide all sides of an issue, and sometimes certain historians slant their treatment of history a certain way on purpose. They are not necessarily attempting to pull the wool over our eyes. Most of the time the treatment of history depends on social issues and views at the time the history was written. However, Irving’s writing helped to provide America with romantic history….a treatment that blends fiction and fact. He also borrowed ideas from European culture to arrive at something totally American.

If there is one person in our history that more than anyone else shaped our memories and created our legends, it’s Washington Irving. America’s first successful fiction author, Irving through his writing created the myths and legends that day form the base of our literary history. Rip Van Winkle and The Legend of Sleepy Hollow are universally known to children as they grow up in our culture helping to forge the commonality we all enjoy. And in his Knickerbocker history Irving chronicled the birth of our nation, a fictitious chronicle indeed but a chronicle whose artificial facts and details to this day help shape our beliefs and our ideas of our country.

Young students simply adore the PBS series Wishbone. Part 1 of Halloween Hound: The Legend of the Creepy Collars can be found here with links to the parts of the episode.

Here is a link to an online text version of The Legend of Sleepy Hollow
Posted by EHT at Monday, October 08, 2007

Thanks for the comments and for the visits.