The Door of No Return

This week’s wordless image portrayed stone walls, a narrow passage way, and a doorway that opened onto a body of water. I’ve placed a similar picture here, but it is at a different location. Most of the comments centered upon an optimistic point of view---- Qtpies7 thought the doorway meant an escape, kat said she thought it was a doorway to freedom, and Alasandra thought it looked similar to a fort in Massachusetts. The image inspired others to think about relaxation, a volcano, and someone questioned were they going out or in.

Until the location of the image was correctly identified by Keith as the Island of Goree off the coast of Senegal the picture posed a postive impression. No one considered the image could represent something sad and tragic.

I’m going to explain the image by telling you a little story…..

The year is 1540. You are an African tribesman going about your daily business early one morning. Let’s say you are sitting outside your hut working on a basket that you will use to store food. Suddenly you are surrounded by fierce looking warriors from a neighboring kingdom your chief has been at war with. Now you are their prisoner, and as the custom dictates you are now the property or slave of the neighboring king. You travel at the point of several spears to a location far, far away from your hut, your village, and your family. No one saw you being taken, and you were unable to say goodbye.

After a couple of days of walking your captors meet up with a group of very light-skinned men. You have never seen people such as these. They smell funny and have hair all over their faces, chests, and arms. Strange sounds come from their throats that make no sense. Your original captors leave you with the light skinned men who immediately place shackels and chains around your neck, wrists, and ankles. They use long sticks to prod you along the path and occaisionally slam the sticks against your body when you don’t move fast enough.

Eventually you meet up with other light skinned men who also have prisoners. You scan the men, women, and children who are also in chains for a recognizable face, but they are just as strange as the light-skinned men, but as your eyes you realize they are just as confused and scared as you are.

At the end of the journey you know you are coming upon the coast because you can smell the sea. Suddenly you notice a very large building looming ahead. It is the largest structure you have ever seen. It’s not made of plant material like your hut…..it’s constructed of rock and rises from the ground two or three stories. The noise level is very high as prisoners like you are screaming and crying. There are wagons and carts going this way and that and many, many more light-skinned people are moving about. You are forced to enter the large stone building and eventually you are thrown into a very small room with several other prisoners. There is no window and a wall that you can see through at certain points prevents you from walking out.

Time passes very slowly. You loose track of how many days and nights you remain in the room. There is no place to relieve yourself and the food that is thrown to you and your cell-mates is often unedible. You begin to fight over it with the other prisoners even though you know you can’t it.

At one point the barrier keeping you in the cell is opened and the light-skinned men come in. They use their sticks to push and prod everyone out into the passageway. You are lined up and forced to walk. The passage is so narrow you could touch the walls on either side. Up ahead you begin to see light…the first light since entering this evil place. You continue to hobble towards it with the others. As you get closer to the light you begin to blink and your eyes water. Suddenly you find yourself through the opening and into the warmth and brightness of full Sun. You breathe in and find that there is no more smell of humanity and death.

Unfortunately, what you don’t realize is you have just walked through the door of no return and are about to be placed in the hold of a Portuguese slave ship…….

My original wordless image is from the House of Slaves on the island of Goree. The story goes that slaves would leave the many, many Portuguese trading centers along the West African coast via the doors that led directly to the slave ships. There is some question regarding the authenticity of the doorways which are usually designated today for tourists to see. In some instances scholars are not certain slaves actually walked through the designated doorways, but they had to leave the trading centers somehow and the doorways are powerful images that draw many African Americans each year as tourists.

Some historians have stated as many as 12 million Africans were transported from their homes into slavery. Of that number it is estimated only 26,000 (still a large number) actually passed through Goree’s House of Slaves which was built in 1776. There is a great Time Magazine article about the island found here.

While slavery in Africa had exisited for hundreds of years prior to European exploration we have the Portuguese to thank for the exportation of African slaves from the west coast of the continent beginning as early as 1444. 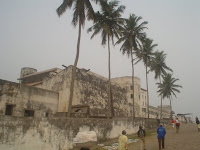 Elmina Castle is another Portuguese trade center built on the Gulf of Guinea. It is the oldest European buildng in existence below the Sahara. The location of Elmina was due to a gold mine in the area which of course, was exploited by the Europeans.

Eventually the Dutch seized all Portguese possessions in Africa in 1637, however, the slave trade from Elmina continued until 1873 when the castle became the posssession of the British Empire.


I’m still thinking about the original impression my readers had of my image. Why so positive? I’ve used this same exercise in the classroom with students and had similar results. Going through a doorway often means a transition into something better, and I’m fairly postive none of Wednesdays participants have ever entered into a slave situation, so they have no context of what it means. Of course, I have had the jokester occasionally who quipped entering the door of my classroom is often entering into servitude.

History can often be a difficult subject to teach in that students have no frame of reference for certain time periods in history. This is where building empathy comes into play. I often try to place students in the role of the historical figure I’m trying to explain whether it is a slave or slave owner.

These concepts are so foreign to students that they can’t relate to either without stories, role play, and much introspection.
Posted by EHT at Friday, October 26, 2007

I found you through Rusty's new blog! I too am a GA teacher. I teach Kindergarten and let them post their journal entries. I love your style,content, and imagery. I have emailed the URL to our staff here at Creek View in Alpharetta.

Hi Kathy! I'm glad you visited and thanks for fowarding the URL...I can't wait to check out your journal entries.

Putting kids in the role of historical figures makes history come alive for them! It's the best way to make a powerful connection to history.

I agree. Too often we discuss slavery in clinical terms. Kids need to understand how severe it really was. I like to use images, first hand accounts, and passages like the one I wrote here.

You are very welcome Isabella. I'm glad you stopped by.