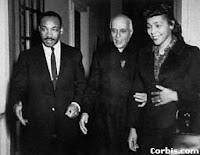 I've written before that students often arrive in my room having seen the same MLK videos, having completed the same MLK worksheets, and read the same MLK books in order to celebrate certain milestones in the American Civil Rights Movement or Dr. King’s birthday. After discussing the situation with various educators at my school and at other locations it seems that it is very easy for a faculty as a whole to get bogged down with the same curriculum materials.

There are simply too many facets to Dr. King’s life for students to be inundated with the same content over and over. One event in Dr. King’s life involves his interest in the teachings of Gandhi and King’s five week visit to India in 1959.

I begin by asking students, “Who do you look to for examples on how to live your life so you make the best choices you possibly can?” I require at least one name from every student and a reason from them regarding why that person is someone to model a life after. I write the names on the board as they are given to me….names such as local pastors, Jesus Christ, George Washington, Harriet Tubman, former teachers, family members and various business leaders. In thinking about my students’ responses please remember they are nine and many have never left the small Bible-belt town they live in, and I usually have to build their prior knowledge for them. Often they are familiar with people and events....they just aren't aware of it.

We discuss for a few minutes why we tend to look to others regarding how we behave and how we make the life choices that we do.

I share with students a few of the people in my life that have influenced me, and then I
present students with a picture of Mahatma Gandhi and Jawaharlal Nehru.I ask, “Do you know who these men are?” A few….one or two….usually state that Mahatma Gandhi seems familiar, but they are unsure of his name.

Then I share a picture of Dr. Martin Luther King, Jr. to students. Immediately every hand goes up and it is evident every face in the room recognizes the leader of the struggle for Civil Rights. However, even though they know who he is they are confused regarding what it is he did. There are always a few who tell me he freed the slaves. Since we usually haven’t gotten to the Civil War in January I smile and simply clear up the misunderstanding by drawing a crude timeline on the board and include the Civil War years, the Reconstruction period, and certain events leading up to the signing of the Civil Rights Act.

Moving along I then share with students that even everyone is influenced by particular people. Sometimes the influence of others can be bad, but we want to focus on the positive influence. I refer students back to the photos of Gandhi and Nehru and let students know that they had (especially Gandhi) tremendous influence over Dr. King and therefore influenced our own history through the Civil Rights Movement.

The website for the King Center confirms that upon entering Crozier Theological Seminary in Chester, Pennsylvania in 1948 and after hearing Dr. A. J. Muste and Dr. Mordecai W. Johnson preach on the life and teachings of Mahatma Gandhi, a young Martin Luther King, Jr. begins to study Gandhi seriously. King referred to Gandhi as “the guiding light of our technique of non-violent social change” (King Papers 5:231).

Indian Prime Minister Jawaharlal Nehru was someone who gave King inspiration during the Montgomery Bus Boycott in 1956. The site for the King Papers advises Dr. King forwarded Nehru a copy of his book Stride Towards Freedom

. Nehru found written inside, “In appreciation for your genuine good-will, your broad humanitarian concern, and the inspiration that your great stuggle for India gave me and the 50,000 Negroes of Montgomery”.

In 1959 Dr. and Mrs. King traveled to India where they spent five weeks. After landing in India King told reporters, “To other countries I may go as a tourist, but to India I come as a pilgrim” (King Papers 5:126). Dr. King referred to the hospitality of the people of India when he stated "The people showered upon us the most generous hospitality imaginable….Virtually every door was open so that our party,” He also stated he, “was able to see some of India's most important social experiments and talk with leaders in and out of government, ranging from Prime Minister Nehru to village councilmen and Vinoba Bhave, the sainted leader of the land reform movement" (King Papers 5:232;143).

Regarding his visit with Prime Minister Nehru, the site for the King Papers advises they discussed the possibility of Indian universities assisting African American students, however, per Lawrence Reddick, who also went along on the trip, Nehru replied, “nobody in poor India had thought about offering scholarships for students from rich America.” (This recollection is retold in Reddick’s With King Through India: A Personal Memoir published in 1968).

Finally, in a radio address made during his final evening in India, King reflected: “Since being in India, I am more convinced than ever before that the method of nonviolent resistance is the most potent weapon available to oppressed people in their struggle for justice and human dignity. In a real sense, Mahatma Gandhi embodied in his life certain universal principles that are inherent in the moral structure of the universe, and these principles are as inescapable as the law of gravitation” ( King Papers 5:136).

This blogger explored Dr. King and the influence of India. He linked to this BBC article and wrote the following:

In The Bystander: John F. Kennedy And the Struggle for Black Equality, Nick Bryant, explores this relationship further. "As I quickly discovered, many of the main heroes of the book - all spent formative portions of their careers in India. They were committed Indophiles - or more accurately, Gandhiphiles", he states. He names Chester Bowles, the Deputy Secretary of State in the Kennedy administration, J K Galbraith, the cerebral Harvard economist who had long argued that America would never live up to its democratic ideal unless its system of racial apartheid was completely dismantled; then there was Harris Wofford, who toiled as Kennedy's chief civil rights advisor and the authored a book called India Afire.

On returning to America in the early 1950s, Mr Wofford discussed these ideas with a young preacher based in Montgomery, Alabama, the so-called 'cradle of the Confederacy.' His name was the Reverend Dr Martin Luther King, Jr. Dr King himself made the long journey to India in 1959, three years after the famed Montgomery Bus Boycott had made him a hero on the subcontinent.

Dr. King drew parallels beween the righteousness of Gandhi's cause to dismantle British rule and his own to dismantle segregation. Dr. King used the same tactic of mass civil disobedience which Gandhi had pioneered with the Dandi Salt March 33 years earlier.

Perhaps the greatest untold gift by India to America might be that it gave inspiration to the American Civil Rights Movement.

Let me know what you think...

Related Postings:
Let Them Read a Book
MLK: It Should Be About How He Lived

I wish I took more time to stop by and read your quotes. I always get some fresh insights in to historical events and people. It's so easy to fall into those ruts you speak of by pulling out the same tired worksheet or approach from last year. Thanks for your diligent research and obvious passion for history and its many lessons for us all

Dan, we all get into those ruts...even our colleagues who won't admit it...

Thank you for your kind words.