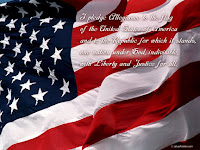 For some reason I’ve been receiving some really great emails lately. You know the kind…the ones that have been around the world and have a kagillion email addresses attached to them. These are the kind of emails you often just delete because you simply don’t have the time to read them or forward them on like a good girl or boy. They can all be pigon-holed into various categories like all of the forwarded emails detailed here, here, and here.

For all the times you receive a forwarded email that just doesn’t appeal to you occasionally you receive one that really speaks to you in some way. Perhaps it’s the safety tip you need, the joke that makes you laugh after a long day, or it involves a little known or easily forgotten event, fact, or theory that intrigues you.

The other day Dear Sister forwarded an email to me and at the top she typed “Do you know about this?” Well, I vaguely knew about the subject of the email, but I had never checked it out to verify the information it contained.

This week for my wordless entry I posted an image of Mike Christian. Mike is the subject of a story that Senator and presidential candidate John McCain speaks about when discussing his imprisonment at the Hanoi Hilton during the Vietnam War. Senator McCain tells the story much better than I can. Watch and listen and then finish my post below.

Most people in this country don’t get the privilege of saying the Pledge of Allegiance to the flag each day. They begin their work day with a bagel, a cup of coffee, a newspaper, a conversation around the water cooler, or catching up on reading their favorite blogs and websites.

As an educator I get that privilege I’m so grateful for. Each day I get to stand, place my hand over my heart and recite the words to pledge my honor and allegiance to the county I love. I cherish that.

I understand that there are some, a small minority, which for religious reasons or lack of any religion do not wish to say the pledge. I have no problem with this as long as it does not interfere with my right to say it.

There are some who want to enjoy all of the privileges of living in a free society, but want to see to it I don’t get to say the pledge the way I learned to say it and the way I think it should be. I understand those opinions and I do respect them, but I don’t understand their fight.

It’s your choice as an American. Say it or don’t say it, but don’t stop those who want to say it because you can’t. The prison guards at Hanoi Hilton couldn’t stop Mike Christian, and no editorial piece, no directive, no ruling, no law will stop me.

The information I found at POW Network advises Mike Christian died in a fire in 1983. There are also other interesting details there. Senator McCain’s written account of his story concerning Mike Christian can be found here, and Joan Clifton Coster crafted a poem about the incident.

Related Posts: Ever wonder about the meaning behind the words of the pledge? Read an explanation here.
Posted by EHT at Thursday, January 31, 2008

The pledge was changed to include the phrase "under God" in the 1950s in response to the red scare going on. Prior to that, the pledge was said without it. In fact, I remember saying it both ways in school. But nevertheless, I don't have a problem with it being there for the same reason I don't have a problem with our money saying "in God we trust", etc. There was a Jehovah's Witness kid in my class once and I recall that he just didn't participate - it was no big deal. I don't THINK he felt self conscious...I don't think the teacher allowed the rest of us to tease him.

June, I've had many children in my classroom who are Jehovah's Witness. I believe it's important early on to speak with the parent, let them get to know you, and provide a non-judgmental atmosphere for every student.

On a past post I commented that I had never taught a Jewish student, and I haven't. I have had many who follow Buddism and Hinduism as well as Muslim students.


All of my students know they have choice in saying the pledge each morning early on in the year and if they choose to not say it they can leave the room or sit quietly. The can choose to say certain words or leave them out. I have never had a problem with any student giving another student a hard time, and I often find students discussing their faith together in an honest and open way along the lines of I believe this or that especially when we begin to discuss the colonies and how many were formed with religious freedom in mind. I don't lead these discussions....they happen on their own during group time and I'm glad they do.

Too often when I'm visiting other blogs I don't see real discourse concerning issues. Instead I see name calling and angry diatribes about why one view is better than another. We need to be open-minded in our discussons even though our own beliefs are rigid.

June, the post I linked to re: the Red Skelton Pledge concerns some of the angry feelings regarding the "under God" phrase.

All of this being said, however, I do realize that some people who disagree with "under God" report being made fun of and being uncomfortable. I understand this and I think this is where we need to have more open and honest (without the anger and attempts to make fun)dialogue.

I love the fact that we live in a country that let's us say what we feel without the fear of being punished for it. One should be able to choose to say the Pledge or not, but should never try to trample on the other. The Pledge means a great deal to me. My husband works with Mike Christian's brother. He was my husband's Captain with the Huntsville Fire Dept. in Alabama. He is one of the best people that I know and tells me that he only wishes he could be half the man his brother was.

Wow, Paper and Ink....that's so very interesting how you are connected to Mike Christian. I find all the connections that folks make to my postings so facinating and it spurs me to continue my writing.

I watched CNN's Revealed the other night regarding John McCain and was stuck again by the sacrifice of all our POWs, but Mike Christian's story resonates deeply with me.

Thank you for the notice regarding my spelling error....I guess you can consider this your good deed for the day, hmmmmmm?

I'm human...I write 1500 words or more each day online. I'm bound to miss a few misplaced letters here and there.