13 Explanations for Something That Went Boom in the Night 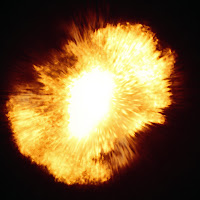 I’d say that the last two weeks have been a little out of the ordinary. First we had an eclipse of the Moon…..we don’t have those every day. Then we had a satellite that hasn’t worked asince it was launched falling to Earth, and there was quite a commotion over where it was going to land, and of course, the threat of some poor community somewhere being doused with hydrazine fuel didn’t look promising at all.

Everything worked out though as I logged on to the Internet late last Wednesday evening and discovered world citizens could rest easy. The plan to blow up the satellite had come to fruition, and the errant school bus sized object was no more. Whew! That was a close one!

The next night was a normal enough night when sometime between 10:45 and 11 we heard and felt a tremendous sound that I have described as a boom, but it had a concussion…a shock wavy type signature with it. My husband and I spent a couple of minutes looking out the windows, listening out for sirens that we knew must be coming, and checking the skies for glows or smoke. Then I logged onto a link where I can hear calls being dispatched to law enforcement in my area.

It was pretty quiet at first and then I began to hear the dispatcher contacting deputies to check out loud noises in my area of the county as well as all the other areas of the county. The dispatcher finally said, “We are getting calls from all over the county and Carroll County (our neighbor to the west) is getting calls too.” I listened in for about 20 minutes and then gave up when I didn’t hear any explantions or reports given.

I love a good mystery and I’ve discovered several logical causes for the noise I and many, many others heard.

So, here are 13 possible causes regarding the big boom:

1. I logged onto a forum page or my area (you can see it here) and made an inquiry last Friday morning. Almost immediately I met up with a comedian who said the loud boom I head was thunder. Very logical, but I’m aware of what thunder sounds like, and what I heard wasn’t thunder. However, just to be scientific about the whole thing I emailed a local weather person at one of our Atlanta television stations and she advised there were no reports of thunder that night in the immediate Atlanta area. Guess we can forget that possible cause.

2. Another cause which came from the Topix forum was another comedian who decided that he/she must have been the one to cause the boom because their gastric region was highly distressed due to their dinner choice that evening. Seems like this excuse is also a loser because…..well, I don’t really have to tell you why, do I?

3. I also made inquiries with the Plantation Pipeline Company because some of their lines run directly out of Alabama into Georgia and go right through a portion of my neighborhood. They neither confirmed nor denied they experienced a problem that night. Later a very reliable source with the local fire department confirmed that if there had there been a problem with the pipeline it would have known to the fire department and they had no knowledge of it. So, I guess that explanation can be crossed off the list.

4. Now my weather person with the Atlanta affiliate did suggest that the sound could have come from a quarry that is located out my way. In fact, it’s right down the road. For years we have experienced the rumblings as they have set off dynamite charges, however, it’s always done during the morning and not late at night. Plus the sound wasn’t right, and as you will soon discover in my list I was by no means alone in my “sound experience.”

5. It could have been a meteor re-entering the atmosphere. I haven’t ruled this out, yet.

6. Could it have been the the Seneca Guns? I located this article dated February 8, 2008 from the Star News Online covering the area of southeastern North Carolina. It seems many citizens were reporting loud mysterious booms around 6:40 p.m. Several things have been ruled out such as military exercises, but apparently loud booms have been reported over the years in this area and in the New York and Connecticut areas as well. The sounds are blamed on the Seneca Guns. You knew I’d weave bits of history into this somehow, did you? The explantion is interesting, but I don't think it's my answer.

7. The newspaper article from number 6 mentioned material falling off the continental shelf. Hmmmm, I’m not discounting this possible solution, but I’m located a good distance from a spot where material would fall off the shelf, don’t you think? The locations in number 6 are near the coastline, so this could be a valid reason why that solution would work along North Carolina's coast.

8. The article also mentioned pockets of hot air which occur deep in the Earth, and don’t have a thing to do with number 2. Another disproved source, so far.

9. Earthquakes? This is logical, however, you’d think by now one of the local news outlets would be reporting it since it is extremely rare in the Atlanta area.

11. This article (from almost a year ago…January, 2007) blames the weather……no, not the thunder thing again, but it quotes a meteorologist at the National Weather Service explaining that booms can occur when we have temperature inversions. These inversions are caused by rapidly dropping temperatures that trap sound waves close to the surface of Earth. This means, per the official, that the sound waves, when dispersed, are forced to move horizontally from their source, instead of upward and horizontally. I believe we have a winner for a possible solution regarding why so many people over such a large area heard the noise, but not the cause of the noise.

12, So, I asked my source with the local fire department if they or the sheriff’s department ever located a source for all the Douglas County 911 calls and was told no. There were no fires or explosions in the county during that time at all. However, many in the law enforcement and emergency fields did have a theory……..apparently they think debris re-entering the Earth’s atmosphere following the destruction of the errant satellite caused the noise. It is true that observers in the northwest got quite a show in the hours that followed the missile hit per this article. The article confirms that debris could continue to fall through the atmosphere over the coming days, and it quoted a Department of Defense statement that said, “Nearly all of the debris will burn up on reentry within 24-48 hours and the remaining debris should re-enter within 40 days.” This article quotes Marine Gen. James Cartwright, vice chairman of the Joint Chiefs of Staff, stating that none of the debris is larger than a football. I’m unaware if debris that size could create a noise as it re-enters the atmosphere. Feel free to comment if you know. However, Cartwright also confirmed that debris would continue to fall through Thursday (the night many heard the noise) and Friday, February 22nd.

13. ...and FINALLY, your payoff for slogging through all of this with me…Seems folks all across the area of the Tennessee Valley and not just my neighbors in Douglas County, Georgia heard and reported a noise last Thursday night. The Huntsville Times reported the same sounds I heard but all over the Huntsville area. This article confirms the confusion over the sounds which were heard in the Opelika area as well. Later they updated their report and advised Redstone Arsenal officials had finally come forward and admitted they were testing rocket engine motors last week. Here's a report from a Huntsville tv station and another.

Well, I sort of liked the satellite explanation, but since Redstone has stepped up, and after some thought I guess I’ll go with their explanation.

Gosh, that's really fun! Good for you for making such an effort to learn and research! Hurray! (I also like the satellite idea! ;)

My TT is Food for thought.

Who knew? That's amazing. We in CT slept like babies...

That was fun, and a good list! Thanks for taking us on that investigation! Happy T-13!

I don't remember hearing anything but your post was very interesting. If I ever need a detective are you for hire? lol

What an interesting article. You are quite a detective. Fun read.

They "admitted" -- that cracks me up. But then I believe in conspiracy theories now and then...

I'm up here and here too.

That's so interesting. We were sitting down to dinner on a Thursday night and we heard something like that. But, it would have been around 7:30 PM EST. We live closer to North Georgia in the center of the state. At first we didn't pay any attention to it, because it sounded like a plane. But, then it went on for a long time and it certainly was not a plane or thunder. We never saw anything on the news and assumed it was the rock quarry that's about 15 miles from here. I wouldn't think that would have come from AL. But, who knows! Thanks for all the investigative reporting.

The air inversion sounds interesting, though obviously it was Redstone. I guess it couldn't be related to the exploding strip mall http://www.kltv.com/Global/story.asp?S=7921062&nav=1TjD Have they figured it out?
On other booms in the night, I was watching TV about 10 p.m., a couple of weeks ago and heard two loud booms. It turns out that someone had included several live shells in a load of scrap metal sold to a local yard (Raleigh, NC). The army's bomb squad was detonating them and since we were outside of the evacuation area, we weren't notified. Now as to the question of how three illegal aliens got hold of sixteen live shells from Fort Bragg, they are still trying to find out. The other explosions were during work hours and covered up by construction work in my area. Unknown explosions are always curiosity inducing.

Sorry, I should have checked. The exploding strip mall wasn't in DeKalb Co., GA-- Google has failed me.

Must learn to read before typing. It was GA.

Sometimes we hear a big boom here in NYC but I live near an airport so I just turn over figuring it's an airplane backfiring... (do airplanes backfire, Ha!) We also live near a highway...how about a car backfiring?

Or it could be a sonic boom - remember those?

Hey...at least it wasn't swamp gas and a weather balloon. I should call my family in Atlanta and see if they heard it, too.

Wow, that's quite the stick-to-it-ness of investigation. I'd have rolled over, asked hubby, and went back to sleep. :)