Absolutely NO to Absolut 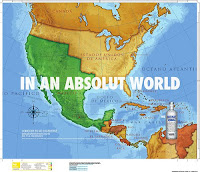 This image has appeared in Absolut vodka ads south of the border. This article from the LA Times states:

The billboard and press campaign, created by advertising agency Teran\TBWA and now running in Mexico, is a colorful map depicting what the Americas might look like in an "Absolut" -- i.e., perfect -- world.

The U.S.-Mexico border lies where it was before the Mexican-American war of 1848 when California, as we now know it, was Mexican territory and known as Alta California.

Following the war, the Treaty of Guadalupe Hidalgo saw the Mexican territories of Alta California and Santa Fé de Nuevo México ceded to the United States to become modern-day California, Texas, New Mexico, Utah, Colorado and Arizona. (Texas actually split from Mexico several years earlier to form a breakaway republic, and was voluntarily annexed by the United States in 1846.)

The campaign taps into the national pride of Mexicans, according to Favio Ucedo, creative director of leading Latino advertising agency Grupo Gallegos in the U.S., which was not involved in the Absolut campaign.

Ucedo, who is from Argentina, said: “Mexicans talk about how the Americans stole their land, so this is their way of reclaiming it. It’s very relevant and the Mexicans will love the idea.”
But he said that were the campaign to run in the United States, it might fall flat.

Ucedo’s reasons why the campaign would fall flat, however, twists my bloomers a bit…..He says, “Many people aren’t going to understand it here. Americans in the East and the North or in the center of the county -- I don’t know if they know much about the history. “Probably Americans in Texas and California understand perfectly and I don’t know how they’d take it.”

While I agree that many Americans don’t know ALL of the details regarding their history…which I find sad, one thing most adults do know is the basic shape of our country on a map.

Absolut had to know this is more than just a cute little ad.

The ad's message has more than one intention, and I don’t really care if Absolut has apologized or not. The small caption published along with the map says that the ad was created for the Mexican audience only and was intended to recall “a time which the population of Mexico might feel was more ideal.”

What’s next? Will we soon be seeing ads intended for German citizens showing maps with concentration camps highlighted? Will Italians see ads showing the gradeur that was Rome by depicting Christians being torn apart by lions? What about an ad targeting Native Americans depicting North America in its natural state? In this type of context we can see how these types of things can be offensive to some.

While I agree that the examples I set out above are extreme compared to a mere image showing a map of past boundaries even a map that seems innocent enough can portray mixed messages in society. For example, think of the mixed messages if the Absolut company decided to run an ad campaign depicting a map showing the United States as it appeared in 1866 or 1867…..What types of reactions would that map garner?

Second, if you haven't yet seen, here's a link to Michelle Malkin's post on Absolut. She's included notes from many who called Absolut to share their opinion and plenty of e-mails that are worth reading.

Thank you, Matthew. I think you are pretty awesome too.

I came to the Absolut party a bit late. I only saw it this afternoon and saved the links to post when I had a minute. Later I heard Dennis Prager talking about it....it was only then I realized there had been such a blog storm concerning it over the weekend.

Thanks for the link to Michelle Malkin....I'll take a look.

I like your blog (it's certainly on my blogroll as a teacher), but have to say that it seems to me that you're ignoring what America actually *did* to Mexico during that war. Whether it was the raping of nuns, the burning of Roman Catholic churches, or the looting of villages, cities, and monasteries, America's interests were purely selfish... in fact, it was our first illegal/immoral offensive war - of many.

I don't agree with Absolut here, but can see what they're getting at - many Americans wouldn't think much of it - I personally *don't* put much faith in my fellow countryman/woman to get a lot of meaning from this ad... sorry ;)

Perhaps it's a statement regarding our lack of care for the rest of the world - and a darn good one at that.

Of course, anonymous, you failed to point out how Mexico made it very clear that annexing Texas to the United States would result in a declaration of war against the US. Or have you not come across President Herrerra wanting to negotiate a peaceful solution and, for that, being considered a traitor to his country and deposed en route to continued hostilities?

The conduct of some individuals in the Mexican War - just like in most conflicts - was deplorable. That conduct was, by and large, committed by undisciplined, poorly managed volunteers.

If you want to discuss the conduct of all-volunteer armies vs. that of wholly professional forces, it's a conversation worth having, though it's one not appropriate for this thread.

Your barb at the average American's knowledge is shameful considering your own willful ignorance.

If you're interested, I can recommend a few history books to go along with that one Zinn book you read.

Hi Anonymous. Thanks for liking my blog. If I knew who you were I could probably say the same regarding your blog.

Nope, I don't see my dislike for the Absolut ad as an effort to whitewash the events of the Mexican American War. Matthew's points above are on point regarding how the land in question ended up in the hands of the United States.

I'm very familiar with the events on both sides as well including something called The Alamo and many other events where both sides faltered in the humanity department.

I really think in your efforts to point out your belief that the United States doesn't care for the rest of the world you missed my point.

My disapproval of the ad doesn't have anything to do with the United States. My whole premise has to do with images, how they are used, and how they can be interpreted.

Is a vodka ad the appropriate venue for something like this? I think not.