There are many types of desks. Messy ones, clean ones, ones to work at and ones just for show. There are fancy desks referred to as secretaries, computer desks, executive desks and roll top desks. Ernest Hemmingway and Winston Churchill preferred a stand-up desk. United States presidents have used the Resolute Desk, and then there is Thomas Jefferson’s lap desk.

Of course, students have desks as well. They generally have gum stuck underneath or inside them, and the tops are adorned with identifying tags left behind by precious owners extolling what they hate or who they love.

The desk I featured in my Wordless Wednesday is a U.S. Senate desk, and they have quite a history.

The desks date back to 1819 when 48 desks were commissioned following the destruction of the previous desks by the British during the War of 1812. There are only four of the original desks…..two are in private collections, one desk is in the Senate collection and another was housed at Beauvoir, Jefferson Davis’ plantation. It was destroyed by Hurricane Katrina. It is hard to determine which desks are original or were commissioned later.

Some of the desks are distinguishable by their trapezoid shape. This enabled the desks to be arranged in a semi-circle. Today, the desks are arranged according to political party. In the 1950s, Senator Wayne Morse switched parties from Republican to Democrat. He actually placed his desk in the middle between each party compromising the normal arrangement.

The Cherokee Strip is an area of the Senate chamber that when used compromises the original arrangement. The area gets its name from an section of Oklahoma that was part of a dispute between the United States and the Cherokees dating back to the Kansas Nebraska Act in 1854. Today the section of the Senate chamber is used when one party has a significant majority and desks are included on the side of the other party.

Just like the desks belonging to my fourth and fifth graders some of the Senate desks contain graffiti. The earliest names and dates go back to the early 1900s and unfortunately, some of the names like Daniel Webster are deemed forgeries. It is not known if some of the desks contain the words, “For a good time call…..” 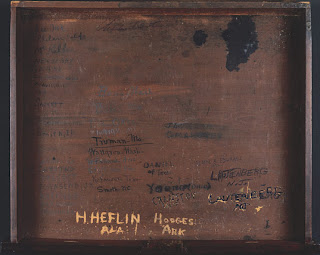 One desk drawer has more than just a signature, however. Desk number 86 has a notation that reads, “Spoke 24 hours, 18 minutes from this desk in 1957….Senator Strom Thurmond (SC) in opposition to the Civil Rights Act.” Back then Senator Thurmond had to rely on his own voice to be heard, but today, each desk is equipped with an amplification box and a microphone…

When Senators leave the Senate they have to leave their desk behind, but can tote their chair with them New chairs are made to replace them. 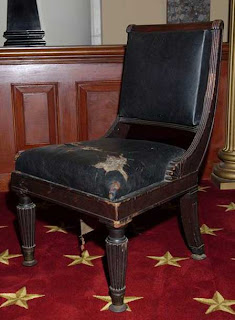 During each legislative session the Senate pages are responsible for making sure each desk is equipped with items that will be needed such as the Congressional Record, Executive Calendar, Calendar of Business, the day’s legislation, any legislative notices or bulletins and just like my students……two pencils.

It’s a wonder the Jefferson Davis’ desk is still intact. During the Civil War soldiers camped out in the Senate chamber. They identified the desk Jefferson Davis, the president of the Confederacy, had used and began to tear it apart. One of the Capital employees stopped them.

If a senator happens to pass away during a legislative session his or her desk is draped in black crepe and flowers are placed on the desk. The flag at the U.S. Capital is flown at half staff. In past years actual funerals were held in the Senate chambers, but that hasn’t happened since 1959.

The best desk of all is the candy desk. Ever since 1965 when George Murphy began to keep a supply of candy in his desk The candy desk currently sits on the back row of the Republican side. 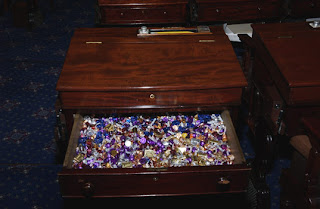 Haha! That is funny!