I went to see the move Lawless the other night and was quiet pleased.  A friend recommended the movie to me and told me I would like to see it because it was just MY THING.

Well.....it was MY THING and more....mainly because it is real history based on true story.

The movie is based on the book The Wettest County in the World that has been aptly described as a fictional account of a very real time.  Matt Bondurant, the author, writes of his family including his grandfather....the main characters of the book.... and calls his work a parallel history using family stories, archival records, news clippings and court transcripts.

The movie is termed a gangster film and to a certain extent that's a correct description.....The movie opens in 1931 when the three Bondurant boys are making and selling moonshine in Franklin County, Virginia.  While violence is just part of the business things get dicey when a corrupt lawman wants a cut and the Bondurant boys don't want to play.  Apparently, making moonshine was a huge business......hence the title of Matt Bondurant's book.....because it's estimated that 90 people out of 100 were making moonshine or had some connection with the making of it in Franklin County.

Of course, the Bondurant boys were breaking the law....but while watching the movie we don't really care.  In this instance they are the bad boys girls seem to like and root for.

The movie stars Shia LaBeouf and one of my new favorite leading men....Tom Hardy....who plays the seemingly invincible Forrest Bondurant.    I'm seriously thinking I need to hunt through Netflix and view some of Hardy's other cinematic offerings.....if you know what I mean. 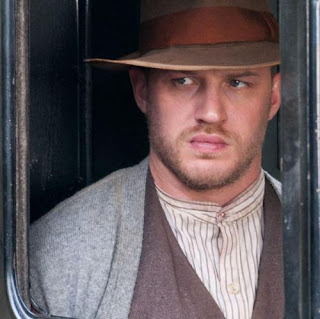 Violence?  Yes, the movie is full of it....so was the book, but the moonshine business  was a violent business after all.  The book....reviewed by Lauren Bufferd at BookPage mentions the book is "extremely graphic, with multiple descriptions of physical injury, brutality and sadistic behavior."

The movie is rather graphic, too.

One of the events the movie mentions but doesn't go into any detail about is the Great Franklin Moonshine Conspiracy trial of 1935....with good reason.

Per this article the conspiracy began....in 1928 when then Franklin County Sheriff Peter Hodges divided the county into districts and assigned a deputy to each district.  The deputy's job was to enlist people to operate stills and then collect protection money - $25 per still, $10 per load of whiskey and $5 for a filing station.

And while folks like me and historians....want to write scholarly works on the subject the fact of the matter is they can't because many of the court documents regarding the conspiracy is missing.

This article states.....But the events of the 1930s have produced no scholarly study, in part because court files and the official trial transcript inexplicably disappeared in the 1950s.  Finding the missing documents has become the personal mission of T. Keister Greer, A Rocky Mount lawyer who retired  last year after practicing 42 years.   Greer, 69, has written to the survivors of the attorneys involved in the conspiracy trial, scoured court records and searched state archives.   He even sifted through 100 boxes containing the personal papers of the Judge John Paul, who presided at the trial.  The last reference to the transcript that Greer has found is a 1945 notation that the document was wired to the clerk of the U.S. District Court in Harrisonburg.  "Then," Greer said, "it simply disappears from the face of the earth.".....Greer said a review of the trial transcript - prepared for the appeal of one defendant - could shed new light on the conspiracy trial and on a subsequent trial for jury tampering.

You really have to wonder......what happened to those court documents and why?

A really talented teacher might want to build a mini-unit around the Franklin County experience with Prohibition and include a mystery lesson component surrounding the court records.

The book is reviewed here.

And to think I would have skipped this film. I'm going to make a point of seeing it.

I haven't watch Lawless. But when I read your article about it, it's kinda thrills me to watch it. I love classic films shot before or during the civilization of man.

I just came across your blog and totally love it. I know that clipart can always be used in the classroom. I came across this site which offers unlimited access to the clipart. Plus new items are added almost daily. Take a peek at it http://www.digiscrappy.info Look for Teachers and Church Teachers.Missy Mae