It's the Birthday M'am! 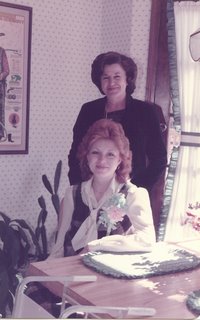 For over four decades a very special person and I have shared many of the same things. We shared the same mother and father , the same house, and many of the same joyful times and heart wrenching tragedies that are common to us all.

I grew up thinking my sissy could do anything, and she can. This is a picture of her with our mother taken at one of her baby showers once upon a time.

My sister can build the best play house with nothing but swept dirt, outlines of pinestraw and twigs and don’t forget the hole dug into the earth a bit that will serve as your handy dandy refrigerator. Who needs Bob Barker and his Amana?

My sister can make the best fake Cinderella crown ever out of cardboard from the back of a school writing tablet and aluminum foil. I wowed the entire third grade on Halloween that year. Not only did I wear my crown Dear Sister figured out how to get my thick hair into a bun. I was a radiant eight year old Cindy-relly!

My sister can tell the scariest tales about a big toe running around the woods on our grandfather’s property. In fact I was so scared I wouldn’t spend the night in my grandfather’s house unless Dear Sister was with me. Our grandfather had cut his big toe off when he was younger with an ax. The tale of Pa Land’s big toe wandering about “the place” was handed down from cousin to cousin to scare the pants off us little ‘uns. Dear Sister was simply doing her part to keep the family history alive.

My sister has a direct line to Santa’s sleigh. She knew he had been to our house whether it was four, five, or six in the morning, and made sure I knew it the minute the coast was clear. Mom and Dad were always very appreciative.

My sister is the best training wheels taker-offer and bike holder-upper there ever was when you are first learning how to ride like a big girl.

My sister can kill a rat using only a sheet and blanket, can yours? We used to go to the country on the weekends. Apparently a little visitor had made its way into the bed we shared. When we figured out “that something fuzzy” wasn’t her and it wasn’t me Dear Sister flung the covers back and sent the poor creature flying. A loud thud met our ears in the pitch black. Dear Sister turned on the light and we found the poor, broken body of the mouse behind an arrangement of dried flowers in the corner. For someone as small as she is Dear Sister is a real scrapper!

My sister can remain calm under extreme pressure. We grew up with a lumberyard for a back yard. When it came time for Dear Sister to learn how to drive she was allowed to drive in and out among the bundles of plywood and two by fours to practice for her driving test. I was placed in the passenger seat to make sure she kept her speed down to a minimum. I mean where was the harm……no cars….we were in a lumberyard after hours, right? At one point I got a little upset with Dear Sister. I have long since forgotten the reason, but I found it necessary to exit the car while it was still moving. I simply opened the door and rolled on across the pavement as Dear Sister didn’t miss a beat. She just kept on driving leaving me to pick myself up and limp on back home. Thinking back on it now it’s a wonder I didn’t roll the wrong way and end up dead.

My sister knows how to feed all kinds of animals. It was her job to feed all the animals we amassed over the years from dogs, cats, ducks, bunnies, a pony, a donkey, a cow, and chinchillas. Yes, at one point we really had chinchillas.

My sister is quite a businesswoman. Everything she touches is sucessful. She’not happy unless she has a million things going on at once. I’ve decided her metabolism is on warp speed while mine is more slow motion.

My sister is the Quick Draw McGraw of cell phone usage. Currently she maintains three that ring constantly…..and I think I make a million different decisions a day.

My sister takes the role of “oldest” seriously. She’s delivered the play-by-play of all of the gut wrenching events in our lives: “Dad’s been in a car wreck.”, “Mom’s had a stroke. She’ll have some lasting effects.”, “The Judge signed the Final Judgement. Mom and Dad are divorced.”, and most recently “I’m holding Mom’s hand. She’s gone.”

As you can see she has spent the last 44 years taking care of me, entertaining me, and watching out for me, and yes, taking the brunt of many of the harder times in our lives.

Today is Dear Sister’s 50th birthday……….she doesn’t look it. Actually, I look like the older one. I encouraged her to do something special for her birthday reminding her that she’s the birthday girl.

So, HAPPY BIRTHDAY M’AM from your little sister and everyone else that loves you, admires you, and is in awe of you.

We number in the hundreds!

What a lovely birthday tribute to your sister! She sounds awesome!