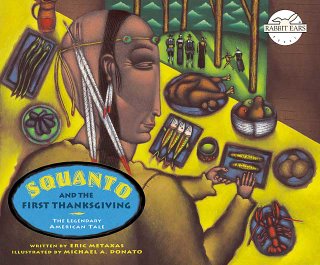 If you are a regular visitor here you already know that I am interested in how historical events connect and weave together to form our common human fabric. I am continually amazed at how events can have far reaching consequences….some across time…..some simply across town. What at first glance appears to be mere circumstance is instead a very carefully woven plan. I believe I know the author of that plan, but of course, that’s up to you to decide for yourself!

I love to share the story of Squanto with students because his life proves certain events and certain people are placed in our paths for reasons. We endure good times and hard times for various reasons. Sometimes we know the reasons immediately, sometimes the reasons are not made clear until later, and other times we are never aware of the far reaching effects of our actions and the people we interact with.

As we journey on through life our experiences teach us various things that we store in our toolbelt for life to be pulled out later as we need to recall the knowledge or the skill to help ourselves or others. This process can certainly be seen in Squanto’s life---that of a true American adventurer and hero.

Most elementary students are taught Squanto lived in the area where the Pilgrims first landed and he helped the Pilgrims learn how to meet their basic needs in their new homeland. While this true there is so much more to learn about this fascinating man. His life can be described as a tempest filled with grief, betrayal, as well as adventure. Squanto, of course, never wrote his own autobiography. The sources that contain information about him are few and far between and only give us snippets of his life, but a trail of events can be pieced together.

Squanto was a member of the Patuxet tribe and lived along the coast of New England near where Cape Cod is today. As Squanto became older contact with Europeans was becoming more and more common as various sea captains began to explore the coast of North America. Once the Jamestown colony was established in 1607 other entrepreneur types wanted to get in on the ground floor, and other possible sites for colonies were being investigated. English and French ships were known to fish the waters along the New England coast and they also traded with different Native American groups for furs.

According to the memoirs of Sir Ferdinando Gorges who joined the Plymouth Company in 1606, Squanto was kidnapped and taken to England in 1605 by Captain George Weymouth who was on a fact finding mission regarding resources of the Canadian and New England coast. In his own letters Weymouth writes that he decided to take a couple of natives back with him but had a hard time controlling them “for they were strong and so naked as our best hold was by their long hair.” Gorges confirms Squanto remained in England for nine years actually living with him before returning to the New World during John Smith’s 1614 voyage where Squanto would act as a guide and interpreter.

If Squanto acted as guide on any expeditions prior to 1614 there are no records to indicate it. There is a record of Squanto being a passenger on John Smith’s ship as he left England to return to the New World in March, 1614 accompanied by a second ship captained by Thomas Hunt. The purpose for the expedition was to hunt for whales and to look for gold. When it became apparent that they were not adept at catching whales and no information regarding gold was obtained Smith decided to save the voyage by fishing and trading for furs. It is believed that it was during this trip that Squanto was close enough to return to his home for a time. Smith ended up returning to England with a full cargo of fish and fur.

Captain Hunt remained in the area and it is believed Squanto acted at times as his interpreter. Their relationship, however, apparently deteriorated as Gorges relates in his report A Brief Relation of the Discovery and Plantation of New England confirms that it was at this point Hunt kidnapped Squanto along with others who were lured on board thinking they could trade beaver. Hunt travelled to Malaga, Spain and attempted to sell the Native Americans into slavery for twenty pounds each.

When local friars found out the intended slaves were Native Americans they took possession of them and attempted to instruct them in the Christian faith. Squanto lived with the friars for a year or two before returning to London with an Englishman named Sir John Slaney of Cornhill who was a very wealthy merchant. Slaney was attached to the Newfoundland Company which managed a colony at Cupper’s Cove, Newfoundland. While he resided with Slaney, Squanto improved his English and returned to North America to act as an interpreter for Slaney and Captain John Mason, governor of the Newfoundland Colony in 1617.

While in Newfoundland Squanto was recognized by Captain Thomas Dermer who was employed by Gorges and the New England Company. Dermer had sailed with John Smith on various voyages. The captain ended up returning Squanto to Gorges back in England. Gorges promptly took advantage of the situation by organizing an expedition for Dermer aided by Squanto to explore the natural resources of New England and to set up trade agreements with the local natives.

Dermer and Gorges both realized by this time the Nauset and Patuxet tribes had had enough of their tribesmen being attacked and kidnapped by Europeans. The natives had taken to attacking any ship that approached their shores. Records indicate they attacked and burned a French ship that came to close to Nauset shores. Gorges knew that having Squanto along would be beneficial.

In 1619 Squanto and Dermer explored what would one day be Plymouth harbor. It was at this time Squanto discovered his entire tribe had perished at the hands of plague since he had last been home in 1614. Squanto was now the last Patuxet. His home village was being avoided by other Native Americans in the area for fear of catching the sickness that had decimated the tribes and there were stories that evil spirits haunted the place.

For a time Squanto continued to work with Dermer but eventually decided to remain with the Pokanokets who lived where Bristol, Rhode Island is today at the invitation of Massasoit, the Grand Sachem of the Wampanoag Federation.

Part 2 of my examination of Squanto’s can be found here.
Posted by EHT at Sunday, November 19, 2006

We are blogging on the Pilgrims all week, so do stop by at
http://wilmette.blogspot.com/

We are blogging on the Pilgrims all week, so do stop by at
http://wilmette.blogspot.com/

You have presented this history very well, so I hope you will not mind a minor disagreement. You write "It was not uncommon for some of the European sea captains to take Native Americans back to Europe with them with or without their consent." (I think I recall this formulation as coming from a book put out a few years ago by Plimoth Plantation and the National Geographic Society - not your own mistake in any case.) Captains Weymouth and Hunt are here multiplied into a generality. Instead of "two English captains kidnapped Natives," the known events are inflated into 'not uncommon for some of the European sea captains..."
Contrasting with this generalized view is the abundant evidence that John Smith, William Bradford, and several English politicians objected strongly to the actions of Weymouth and Hunt, as being both illegal and impolitic. Kidnapping was illegal under English law, and to kidnap Natives was impolitic because everyone knew this would sour relations with the Indians whom the English desired to keep as trading partners. The interpretive consequence of generalizing in this way is an unintended tendentious depiction of Europeans as typically evil - unintended on your part, no doubt, but intended by the authors of the source in which the idea was launched. My review of the book, 1621, A New Look at Thanksgiving , is called "1621, A Historian Looks Anew at Thanksgiving." It is published on the website www.sail1620.org
where several other articles about the topic of Pilgrim history are published. Your site's information is among the best I've seen, so my specific comment might seem quibbling. If so, I apologize.

Mr. Bangs, what a pleasant surprise to find a comment from you this morning! I hope you visit and comment often in the future.

I will agree with you that I generalized the information at that point, and per the research I had done to that point I should have simply referred to Weymouth and Hunt as they were the only two by name I located. I would also like to mention that Metaxes book/video I shared with students did not mention Squanto was taken twice....only once. I can't wait to share with this students after the break.

I felt I was safe in generalizing since my research also referred to the increasing feelings of resentment and fear due to numerous kidnappings along the coast. Were Weymouth and Hunt the only sea captains taking Native Americans? It didn't seem so to me, but of course I have not reviewed numerous primary sources.

I welcome the conversation, and would never consider your comments quibbling.

Thanks for the compliment, and will visit the site you refer to.