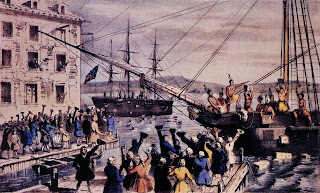 I’ve been attempting to integrate our social studies content into language arts over the last few days by asking students to write an essay regarding the causes of the American Revolution. I’m attempting to move my nine year olds into writing what you might remember as the five paragraph theme. They are very excited because most have never ventured beyond one or two paragraphs. We have gone over the A, B, C’s of essay writing which are:

(A) Analyze your topic----what is it you are supposed to write about and how? Decide if the writing should explain, discuss, state an opinion, or compare and contrast.

(C) Choose the items that fit your topic and highlight them.

We analyzed our topic: Write a five paragraph essay regarding the causes of the American Revolution. Begin your essay with a question. Students looked back at the Georgia Standards for our unit and decided since the standard said they were to "discuss" and "explain" that would be the appropriate style of writing for this particular essay.

We brainstormed our topic. I was so proud of them. Every student contributed and they simply amazed me with the items they had retained. As someone suggested an item many were already analyzing the list decided that some of the things we were listing probably wouldn’t fit while others were reactions or effects. I reminded them we would organize our list later.

Here are 13 items from our brainstorm list concerning the causes of the American Revolution.

2. Boston Massacre----snowballs, yelling, John Adams represented the British in court. Was it really a “massacre”?

4. “No taxation without representation”

7. Massachusetts/Virginia had had colonists for a long time….Georgia still a “baby” colony People who had had family here the longest didn’t feel tied to Britain anymore.

8. Parliament/Great Britain had huge debts after French and Indian War plus war in Europe

10. Sons and Daughters of Liberty

It was pure bliss to let students give this back to me on their own. I’m so proud of them.

It has been...hmm...30..I mean 20 something years since I studied the Revoluntionary War. I would think #1 and #4 were causes and #'s 11 and 12 were effects. The rest I'm ashamed to say I don't know for sure. Will you post the answeres later?

If my brain was working this early in the morning, it might help. I will have to come back, after our World history exam today, to see if I can answer these.

What a cool site! Love it. I love history. My daughter is in 5th grade and has been talking about the American Revolution so much lately, and since it's one of my favorite time periods, I love the discussion.

In fact, last night at dinner, we were talking about who we'd like to have dinner with from history--and she picked Ben Franklin and Patrick Henry as two of her choices!


My TT's up...things you should know about the vampires in my books, The Gardella Vampire Chronicles...
look for it here:
http://www.colleengleason.com/wordpress/

I enjoyed learning about the American Revolution as as a child in 5th grade. In my town, US history was the social studies curriculum for 5th grade. We travelled to Boston proper, Lexington and Concord. We saw Walden Pond, and all of the major Revolutionary War sites.

Thanks for a informative post on the American Revolution. I'll be teaching American History next year, High School level and I find your blog a wonderful resource for topics I want to cover. Your students are lucky to have you, from reading your blog I can tell you really love history.

Your students did very well. I love history and enjoy "re-learning" it with my boys.

I wish I could have your students in three years. We have a Historical Fiction unit using Lit Circles on books about the Revolutionary War. I'll bet your students will be more organized writers after this.