History of a Long, Dirt Road 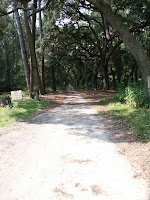 I love dirt roads, and Georgia is simply full of them. Unfortunately you have to travel further and further from the environs of Atlanta to find them anymore. When I was 18 and a newbie on the college campus of my parent’s choosing I was a member of the Dirt Road Club.

The requirements were simple…..you had to have enough money to invest in either gas or an appropriate beverage or two for you and your fellow club members, you had to be willing to devote an occaisional Saturday or Sunday to what could be an all day, all night road trip, and if you were the official driver for that trip you had turn off the main highway everytime you came upon a dirt road and follow it until you couldn’t follow it any longer.

Needless to say I’m quite the expert when it comes to private drives and logging roads all over North Georgia.

Just like the explorers of the 1500s and just like those folks who brave the elements to climb Mt. Everest members of The Dirt Road Club ventured forth because they were compelled to.

Our club motto was “Because it’s there!”

Yes, there were some dirt roads that were a bit scary, some that had a Deliverance feel to them, and some were just plain dangerous. Others were pure gems. Once when riding along through a forest the trees suddenly cleared and we found ourselves on a ridge where you could see mountain rise after mountain rise in the distance. Another time we found a mountain stream complete with waterfall and on the hills rising up all around us were hundreds of mountain laurel in full bloom. Those were the moments that kept us going down all those dirt roads.

This week’s wordless image was a dirt road. The image received many comments regarding perspective and the fact that the road in the photo looked like a very long road. It does my heart good when so many take the time to bring out other details like the palmetto, live oaks, and the shell road like Shannon and Carmi.

The road seen in my image has the distinction of being the longest and oldest dirt road still in use in America. It is located on Ossabaw Island, a barrier island along Georgia’s coast. Jeremy was the first commenter to place the image in the proper U.S. region so congratulations and enjoy your link. :)

To find out more about Ossabaw’s long, dirt road take a detour to my post over at Georgia on My Mind.
Posted by EHT at Friday, December 14, 2007

I moved to paved-over Southern California seven years ago. The only thing that saved my sanity is my discovering some dirt roads within easy walking distance of the sterile suburban house where I live. Dirt roads are my delight!