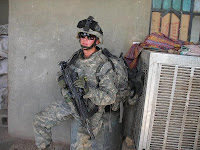 When my son was younger my home and yard was generally full with other young men playing in the creek, shooting baskets, and eating my groceries. Many a Saturday morning found my husband and I winding through a maze of young male bodies shrouded in a various assortment of scrounged bedding on my living room floor. Two of those young boys who are brothers grew up to be fine young men who joined the U.S. Army after graduation. I've written about them before.

It was prayful relief Thanksgiving morning to walk into the embrace of the younger brother, Seth, and feel his now powerful arms and hands hug me. It’s funny how things change because those are the same arms and hands that would wipe away tears of anger when his older brother and my son would ban him from whatever activity they were engaged in. He would quietly come in the house and begin a video game or play with my daughter as she stood in the playpen waiting for attention. He never tattled, but I knew why he came inside. The same childish arms are now unrecognizable with large muscles and scary tatoos, but he’s earned them, and I will excuse almost anything from him.

When Seth left for Iraq we braced ourselves for what would be a long tour of duty. He’s in the infantry and would be living out in some of the most dangerous territories. During these long months I stopped listening to the news reports because it was just too much to bear. He’s home now. He’s safe. He will continue to serve his country along with his brother and sister-in-law. We are very proud of all three of them.

When I asked Seth if he thought his time in Iraq was well spent. He was very insistant that we are making a difference for good in that country. He told me that things had improved so much since he had first arrived.

Sadly I heard of a different homecoming for another soldier the same day. A nice young man I remember as a cute little boy gave the ultimate sacrifice for his county. Peter H. Burks was my

brother-in-law’s cousin. Years ago when his family still lived in the Atlanta area I would often see him at family dinners at my sister’s home. I remember a cute and mannerable young man who had many things going for him.

Army 2nd Lt. Peter H. Burks died November 14th when his vehicle was hit by a roadside bomb just outside the Green Zone in Baghdad. Peter received shrapnel wounds to his head and died at the scene. He was assigned to the 4th Squadron, 2nd Stryker Cavalry Regiment, Vilseck, Germany.

In newspaper interviews Peter’s father, Alan Burks, stated, “He told me over and over and over again, he said: ‘Dad, my job is to get my 17 guys home safe…Then after that I’ll get myself home safe.’” Apparently Peter’s first words when the explosion occurred was to ask his men, “Are you OK?” Then he stated he was OK, but he wasn’t. According to the officers who were there, he was conscious for a short period of time.

Before joining the army Peter, who was 26, had graduated from Texas A & M University and worked for the Dallas Desperados arena football team and FC Dallas soccer in marketing. Feeling the need, as so many of our young people do to serve his country, he joined the army in 2006 and had been in Iraq three months.

When I Googled Peter’s name I was amazed at the number of links that already exist to various news stories and remembrance sites. This is the Stryker Brigade News site and it has numerous links to interviews with Peter’s parents and other sites as well. Another news article can be found here, and this is a blog that remembers fallen heroes.

I can’t imagine what Alan and Jackie, Peter’s parents, are going through. What do you say? How do you help at a time like this? Jackie summed it up pretty well in an interview when she stated, “The way I could hold on as a mother is because I have that relationship with Jesus Christ. Peter accepted Jesus Christ as his personal savior as a child.” My thoughts are with Alan and Jackie and the rest of Peter's extended family.

Peter’s e-mails home were very thoughtful about our country and the current situation we find ourselves.

I really feel that our country is in a very pivotal time right now. The fact that so few people are really plugged in to what’s going on in the world and in our country really scares the crap out of me.

Do I still believe in America and what we are founded on and meant to stand for? Absolutely! I just want our country to be the best it can be and our people to be the best we can be.

I wonder......Can we all strive to achieve a fallen soldier's desire, or will the majority of us remain unplugged?

Thank you for visiting. My more current postings can be found here.
Posted by EHT at Monday, December 03, 2007

This article has been published in the latest edition of Mom's Blogging Carnival.

Thanks for participating in this week's Carnival of Family Life, hosted by Adventures in Juggling. Be sure to visit on Monday and check out some of the other wonderful entries!

Have you considered serving as a host? Check out the schedule and drop me an e-mail telling me which week would be best for you!!

Aria Kerry said...
This comment has been removed by the author.
2:44 AM