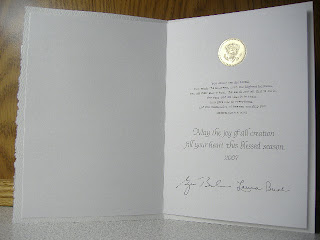 Right after Thanksgiving I began searching for something…..anything regarding the 2007 White House Christmas Card.

I had so much fun last year researching the article I wrote and published here and at American Presidents titled Have You Received Your Christmas Card From the White House Yet?, and I wanted to make sure I posted this year’s design as soon as it was made available.

After an exhaustive search I finally found an image. I’ve posted the inside of the card here.

Wouldn’t you like to know what the front looks like? Well, then head on over to the American Presidents Blog, of course.

A huge thank you goes to Michael Swartz at monoblogue. He actually had the honor of receiving the card you see in the image above. He receives my undying gratitude for giving me his permission to post the pictures here in what seems to be the second time the official White House Christmas Card for 2007 card has had a mention along with an image on the Internet to date.

You do move in exalted circles!
Cheers

This is my calling card or link"Whittereronautism"until blogger comments get themselves sorted out.

Very cool..wouldn't that be fun...the White House Christmas party..
Thank you for the comment on my blog!