Washington: The Making of The American Capital 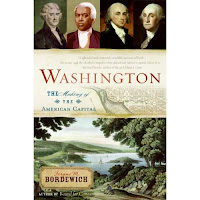 The first and last time I visited Washington D.C. I was in the seventh grade. The trip served as a reward for participating as a member of the school patrol. Some of us had served alongside our school crossing guard, along the car rider lane, on our school bus, or many, like me, took up a post in the hallway or cycled in and out of the restrooms during our daily 15-20 minute tour of duty. Quite simply we told kids to stop rough-housing, to move along, and to slow----it---down. For the most part we were listened to and respected. Today….I’m sure a fight would break out because someone would think they were being disrespected.

The trip to our nation’s capital was amazing. What struck me the most was the awesome size of our nation’s marble monuments that symbolize our republic – the Supreme Court building, the Capitol, the National Archives, the Washington Monument – everywhere I looked I saw Greek and Roman facades and columns, and marble…..marble everywhere. The dazzling whiteness, the chisled columns, the carved pediments, imposing wide steps, the wide avenues, and statuary everywhere the eye looked…all designed to impress, inspire, and illustrate the greatness and power of the United States.

Pictures and video simply do not express the beauty, the grandeur, and the promise of power that seeps from every famed building, fountain, and park. Every year I attempt to do our nation’s capital justice by attempting to convey what is it like, but it’s hard. Many of my students have never even been to Atlanta, even though it is a mere 25 miles away and others, if they have gotten that far from home have only been through Atlanta, not “to” it. During all of my years of teaching I’ve only run across a handful of kids who have visited and toured Washington D.C.

Usually we discuss the creation and building of our nation’s capital soon after we have ended our look at the American Revolution and discovered how the Constitution was written. While I often feel inadequate relying on my feeble attempts to describe the nation’s city through images and my memories, I also feel our texts do a poor job as well.

If ever there was a spot in the curriculum road to go four-wheeling, it’s at this point. Texts rarely provide enough data to get across the powerful images Washington D.C. conveys and many of the most interesting details are often left out of the story.

For example, in the text published by Scott Foresman titled Building a Nation my students can learn that Congress argued for over 10 years regarding the site of our nation’s capital. They learn what the D.C. stands for. They learn the land is not far from Mt. Vernon, and in 1799 the capital was referred to as Washington D.C. rather than Federal City in honor of our first president. L’Enfant is described as the city’s designer, and Benjamin Banneker is identified as the an inventor, mathematician, astronomer, and the son of a freed slave. The text simply states that Banneker was asked to help with the project. More information is given about Banneker on another page in the textbook.

That’s it. If I was a teacher who just relied on a textbook to teach American History to students the above is all they would know. It’s not much.

Enter a new book by Fergus M. Bordewich titled Washington: The Making of The American Capital

With over thirty pages of notes regarding references used in his research I’m confident that Mr. Bordewich is a reliable source for use by history teachers, history students, and lovers of history in general.

The thorough history Mr. Bordewich provides engaged me with every turn of the page, and I couldn’t help but mark certain things that spoke to me in some way, or things that I wanted to make sure I added to my teaching unit regarding Washington D.C.

Here are just a few of the items I marked:

*the site that exists today came about during a dinner between James Madison, Alexander Hamilton, and Thomas Jefferson, but it was not the original choice. Bordewich goes into great detail regarding all of the events and all of the various involved parties prior to and after Jefferson’s dinner party.

*Bordewich explains in great detail why Major L’Enfant soon faded from the story, and how Andrew Ellicott became a rising star in the planning and building process.

*I found Bordewich’s section regarding the involvement of Benjamin Banneker to be one of the most well written and detail ridden accounts I’ve seen to date. In fact, I’m planning on figuring out how I can share these pages with students either by simply reading them aloud and stopping every so often to discuss main points, or by reading a more juvenile account of Mr. Banneker’s life and have students compare it to the account given in Bordewich’s book.

*The issue of slavery is dealt with heavily in the book as it should be. It was an issue in the final location choice, and it was an issue with the labor that built the city.

*And where did the money come from to pay for the land and the buildings? Again, Bordewich lays it all out…the good, the bad, and the ugly.

Oh, those backstories I love so much!

I’ve only related a smidge of the story Bordewich relates concerning the founding and building of our nation’s capital. It’s an entertaining read and I highly recommend it.
Posted by EHT at Friday, May 09, 2008

I can't believe it!

I was given this book today by a teacher from a California school - the minute she met me at the baggage claim at Dulles! (She thought that I hadn't purchased it yet - and she was correct!)

And I would LOVE to show you around Washington, DC and Virginia!

P.S. Tomorrow we are part of the Second Virginia Convention at St. John's Church and we will hear Mr. Henry's powerful speech. Then off to Jamestown Settlement and Island. We end the night with a colonial dance program in Williamsburg.