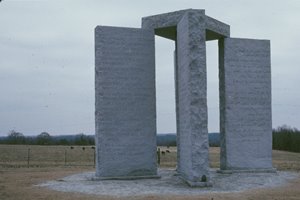 Ok, here’s a challenge for you…….What does Thomas Paine, the center of the universe for the Cherokee Nation, and the Rosicrucians have in common?

Yes, I know it’s intriguing…….what could it be?

If your answer was the Georgia Guidestones you would be correct.

The Georgia Guidestones are located just outside the small town of Elberton, Georgia, the granite capital of Georgia. What better place for a mysterious man to appear suddenly one day and arrange to have a monument erected based on, according to him, the principals Thomas Paine expressed in The Age of Reason.

Elberton, Georgia is also very close to Al-yeh-li-A lo-He which is the center of the universe according to Cherokee legend. In fact, major Cherokee trails radiated from the Elberton area and major ceremonies were performed there annually.

Sounds fairly interesting until you actually read the ten guiding principals etched on the stones. Then it becomes strange. The first one calls for a world population of no more than 500,000, 000. That means that the majority of the Earth’s population would need to perish in order to reach a harmonious balance. Many call these principals the ten commandments of the New World Order or that they are the guiding principals of the Anti-Christ. Another tie-in with the Cherokee Nation’s center of the universe is a legend that states the “new age” will begin from Al-ye-li-A lo-He.

Others state the whole thing is a stunt by the city fathers of Elberton to boost tourism.

Review the evolution of the guide stones here.

Here are some other links for the stones here, here, and here.

Google the words “Georgia Guide Stones” and there are many, many links to sites that are interesting in a strange sort of way as you click each one. Careful though......don't get sucked in!

That's really intriguing! Thanks for sharing!