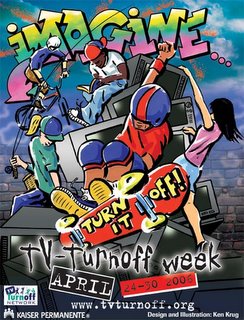 We had our annual visit from a group of third graders Friday. They came in and asked me if they could address my class for a few minutes. One young man who was rather tall for his age stated, “We have something important to challenge your class with.”

For the last several years the third graders have promoted Turn Off the TV Week by challenging other grade levels to participate. They make posters and make classroom visits. They even create commercials they act out on our homeroom tv broadcast. You can get more information about Turn Off the TV Week here. The website states, “Empowering people to take control of technology and not letting technology take control of them so they can live their lives.”

Several fourth graders are beginning an author study for Roald Dahl’s works (Matilda, The BFG, etc.) and as I was researching some items I ran across the following poem by Dahl that discusses television use by children. I thought it would fit nicely here.

The most important thing we've learned,
So far as children are concerned,Is never,
NEVER, NEVER letThem near your television set --
Or better still, just don't installThe idiotic thing at all.
In almost every house we've been,
We've watched them gaping at the screen.
They loll and slop and lounge about,And stare until their eyes pop out.
(Last week in someone's place we sawA dozen eyeballs on the floor.)
They sit and stare and stare and sit
Until they're hypnotised by it,Until they're absolutely drunk
With all that shocking ghastly junk.
Oh yes, we know it keeps them still,
They don't climb out the window sill,
They never fight or kick or punch,
They leave you free to cook the lunch
And wash the dishes in the sink --
But did you ever stop to think,
To wonder just exactly what
This does to your beloved tot?
IT ROTS THE SENSE IN THE HEAD!
IT KILLS IMAGINATION DEAD!
IT CLOGS AND CLUTTERS UP THE MIND!
IT MAKES A CHILD SO DULL AND BLIND
HE CAN NO LONGER UNDERSTAND A FANTASY, A FAIRYLAND!
HIS BRAIN BECOMES AS SOFT AS CHEESE!
HIS POWERS OF THINKING RUST AND FREEZE!
HE CANNOT THINK -- HE ONLY SEES!
'All right!' you'll cry. 'All right!' you'll say,
'But if we take the set away,
What shall we do to entertainOur darling children?
Please explain!
'We'll answer this by asking you,
'What used the darling ones to do?
'How used they keep themselves contented
Before this monster was invented?
'Have you forgotten? Don't you know?
We'll say it very loud and slow:THEY ... USED ... TO ... READ!
They'd READ and READ,AND READ and READ,
and then proceedTo READ some more.
Great Scott! Gadzooks!One half their lives was reading books!
The nursery shelves held books galore!
Books cluttered up the nursery floor!
And in the bedroom, by the bed,
More books were waiting to be read!
Such wondrous, fine, fantastic tales
Of dragons, gypsies, queens, and whales
And treasure isles, and distant shores
Where smugglers rowed with muffled oars,
And pirates wearing purple pants,
And sailing ships and elephants,
And cannibals crouching 'round the pot,
Stirring away at something hot.
(It smells so good, what can it be?Good gracious, it's Penelope.)
The younger ones had Beatrix Potter
With Mr. Tod, the dirty rotter,And Squirrel Nutkin, Pigling Bland,
And Mrs. Tiggy-Winkle and-Just How The Camel Got His Hump,
And How the Monkey Lost His Rump,And Mr. Toad, and bless my soul,
There's Mr. Rate and Mr. Mole-
Oh, books, what books they used to know,
Those children living long ago!
So please, oh please, we beg, we pray,
Go throw your TV set away,
And in its place you can install
A lovely bookshelf on the wall.
Then fill the shelves with lots of books,
Ignoring all the dirty looks,
The screams and yells, the bites and kicks,
And children hitting you with sticks-
Fear not, because we promise you
That, in about a week or two
Of having nothing else to do,
They'll now begin to feel the need
Of having something to read.
And once they start -- oh boy, oh boy!

Oh, in case you were wondering, our homeroom tv broadcasts next week will be cancelled and we will have homeroom announcements in the old fashioned way over the intercom. Elementaryhistoryteacher, however, doesn’t think she can manage to miss her favorites such as “24”, “The Sopranos”, and “The Office”. We shall see.
Posted by EHT at Sunday, April 23, 2006

An update to this post.....no tv sucks during late bus duty. My room was destroyed as kids ravaged my classroom library. No one read...they just moved books from one tub to the other. Yes, this means that we use tv as a babysitter in the late bus room so it will be quiet. I mean... you don't want any of the darlins left behind, now do you?

Great find on that poem!

Just wanted you to know that Civil War Memory can be found at the following URL: http://civilwarmemory.typepad.com/civil_war_memory/