13 Things About the New Hindu Temple in Lilburn, Georgia

What in the world is that?

That’s the question I remember asking when my mother and I passed the construction of the Hindu Temple in Clayton County, Georgia. I was home from college and didn’t know about the construction. Suddenly it felt like I was in a foreign country. I found the building so in 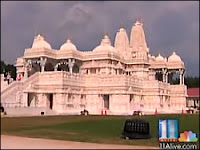 My wordless image this week was of course is an image of the new Hindu Temple in Lilburn, Georgia, a suburb of Atlanta. The massive structure is being dedicated this weekend. Teachergirl correctly identified my image.

1. The dedication is set to coincide with the 100th year anniversary of the Bochasanwasi Shri Akshar Purushottarn Swarninarayan Sanstha sect of Hindusim. The sect was established in 1907 by guru Shastriji Maharaj.

2. The opening of the temple has drawn thousands of people to the Atlanta area for the festivities which included a parade of elaborate floats and cultural dancers.

3. The swami arrived via private plane that touched down at the Peachtree Dekalb Airport and arrived at the temple in a Rolls Royce covered with flowers. He was met by the mayor of Lilburn, Jack Bolton, who presented the swami with the key to the city. The swami in turn gave a blessing for the city.

4. Officials for the sect state the temple will be a location for devotees to meet for religious and social gatherings.

5. The temple is 30,535 square feet of carved marble, and has been compared to a wedding cake and evokes thoughts of the Taj Mahal in India. There is no metalwork or concrete in the entire structure.

6. The temple is one of the larges Hindu Temples in the United States including the ones in Houston and in Chicago. It is also larger than another temple in the Atlanta suburbs that makes its home in Riverdale, Georgia.

7. The structure cost 19 million dollars and is the result of 1.3 million hours of volunteer consutruction. Many volunteers in the U.S. and in India put their personal lives on hold in order to volunteer to help with the construction.

8. The temple was constructed in sections of carved marble and took over two years to piece together.

9. The marble came from Italy and one source stated it was the same type of Marble 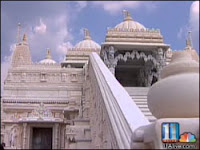 Michelangelo used in much of his work. The sandstone used in the temple is from Turkey. Both the marble and sandstone made their way to Rajaskthan in western India where artisans carved the intricate designs and patterns. Some pieces are the size of Volkswagen beetles while others are as small as tiny flowers.

10. Each piece was numbered and put together much like a huge jigsaw puzzle. Hindu scripture provides the necessary lengths, widths, and heights of temples. Yogesh Patel, the designer of the temple, states it should last for 1,000 years.

11. Temple members will not know how to act once they begin their worship in the new temple. They had been meeting in a skating rink. The new temple will conduct prayer five times a day rather than twice, and it should draw worshippers throughout the southeast.

12. Naturally the temple dwarfs anything in the area including the homes within the Dickens Trail neighborhood which backs up to the temple property. Folks are being very accepting even though there has been much commotion in the neighborhood within the last few days or so. Dedication rituals include constant chanting and praying that has been broadcast over loud speakers which could be annoying. They have been chanting non-stop from early morning until dark three weekends in a row. Neighbors, however, are grateful for what is NOT on the property such as another strip mall, gas station, stripclub, or yet another Walmart. Also during the building process many of the members of the congregation have reached out to the surrounding neighbors including a delivery of candy at Christmas.

13. Public tours will begin September 1st, and I hope to be able to visit this massive structure. I’ll have to remember a few rules, however, so I don’t commit a faux paux. No hats, shorts, or tank tops can be worn in the temple. There is no smoking or drinking…not that I do that anyway. Cellphones should be placed on vibrate. There is no photography inside the mandir and shoes must be removed before entering the building.

It would seem that tours do have to be arranged through BAPS officials. Additional information can be obtained through the BAPS website.

Are you thirteening yet? Join here.

This thirteen was reblogged almost entirely from local newspapers and news reports. The photos are courtesy of 11 Alive News.
Posted by EHT at Thursday, August 30, 2007

How beautiful. I hope you enjoy your visit to the temple.

I'd like to go too. Maybe we can go together.

It's amazing how they built it.

Beautiful and amazing! Enjoy the tour.

What an amazing structure. I'd love to be there to see all the opening pageantry.

I read about that in the AJC online. Really gorgeous temple!

Wow - the constuction of the temple is amazing!

Loved the facts - would be a great field trip when teaching the World Religions unit.

I grew up outside of Chicago and I've been to the Hindu temple there. Again, truly amazing! :-)

amazing architecture. "cell phones should be placed on vibrate" - LOL! or just turned off ("Worshiping in the temple gives me a strange sensation in my pants").

We live in such a splendid country, where the foreign can become familiar.

Anonymous said...
This comment has been removed by a blog administrator.
9:55 PM

It's in Gwinnett County not Clayton

Yes, Anonymous you are correct the new temple is in Lilburn and in Gwinnett County.

My post also refers to another...smaller temple in Clayton County. It is on Hwy. 85 in Riverdale.