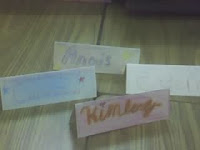 As I get older I find that I can’t remember names like I used to. Seating charts and assignned seats help, but when you make the August transformation from the serenity of your home cave to the rowdiness and confusion of the first few days of school it’s difficult to get a fix on five different groups of kids.

No matter how how I try I always end up saying things like,
“Hey, you….Hey kid…..you…you there in the yellow shirt…” or “Yo, blonde girl…”, or my personal favorite name calling fiasco…

“Jim, what about three?

I finally walk over to Jim. Jim looks up. “Jim, now that we have your attention, can you answer number three for us?”

I barely get out the word “Oh”as I slink back over to my stool amidst titters and downright guffaws.

How cold and cruel can they be? Somebody had to know his name wasn’t Jim. I know I have a Jim around here somewhere.....Why didn't he speak up? Is it May yet?

Well, my fine young charges had drawn a line in the …..carpet…..and I couldn’t let them continue to get the best of me.

While we finished going over our lesson questions I just pointed to students as I called on them and mentally hatched out my plot. I vowed to never forget a name as long as the school year lasted, or until I die, whichever should occur first.

We had a few minutes of time left before the end of class so I dove into my closet and pulled out my box of old, used file folders and the brand, spanking new boxes of Crayolas I had unpacked during pre-planning. I really hated to pull those Crayons out because I knew in mere seconds I would never see the boxes again, and the poor stubby sticks of color would wind up in the huge bin of forlorn and broken crayon pieces in the back of the room.

The kids, of course, erupted into choruses of “Hey, EHT, what cha’ doin’?” Some of the more antsey ones were already up on their knees trying to get a better view. Then the guessing began.

“What are we gonna color?”

“Are these going in the hall?”

I grabbed a pair of scissors and began to cut each side of the file folders into neatly trimmed rectangles while they continued to throw out guesses. Finally, I sat on my stool…mainly to see if they remembered one of the quiet signals I had gone over earlier. Within seconds they were quiet, and I picked up a rectangle and began to tell them what we were going to do. 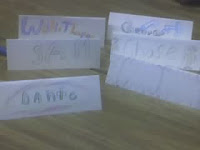 I tell students they can keep them in the pocket of their folders, and at the end of every nine weeks those students that still have their nameplates will receive an ice cream on me from the cafeteria. Many still have them at the end of the year. They think they are smart because they manage to get four free ice creams out of me, but I like to think I’m the smart one because I don’t have to say, “Hey….Hey you…..!”
Posted by EHT at Monday, August 13, 2007

Brilliant! In this way, everybody turns out to be a winner! This is really a great idea.

Interestingly enough, I've been working on a posting concerning my Cousin Margaret's funeral.

There were so many people there whom I either hadn't recognized (after so many years), or hadn't known.

I remarked to my stepmother that at the reception afterwards, we should have provided sticky badges and pens so they could write their names and relationships i.e. cousin, friend, in-law, niece, great-granddaughter.

I was somehow expected to know all these people, and there were a couple of faux pas committed on my part, mistaking one cousin for another! I also missed greeting people I had heard about, but had never had the opportunity to meet.

Yes, providing nametags or another sort of labeling is a good thing! It's how I remember the names on tour as well.

Making nameplates was the first task my fifth graders had to complete on Monday. I know almost all of them, now. But, new ones come to Social Studies on Thursday, so new nameplates will be the first order of business.

Hi Teachergirl! By the third week I usually have the names down as well, but there are those pesky few that I continually get mixed up.

The namesplates begin to be part of our beginning class routine as they come in the room. It's really amusing to observe some of them as they "set up their area" and make it their own with their nameplate.

They come in handy when we have class visitors, student teachers, and substitute teachers in the room as well.

I did this last year, and it helped. (Though I never thought of the ice cream part. Great idea!) I had two boys who delighted in trading their names back and forth, just so they could laugh at me.

I also assign them seats alphabetically (for attendance purposes and also to get them away from the their friends). :-)

Oh, the travel blog is up and running - finally! :-) Feel free to check it out!
http://salemteacherinrussia.wordpress.com/

Hi M-Dawg! Glad to see you are back. I can't wait to read about your travels.