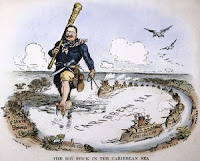 It's not just more recent times that the U.S. has been involved in military actions overseas. Theodore Roosevelt really did carry a big stick....

3. 1902-Columbia (State of Panama) - September 17 through November 18 - The United States placed armed guards on all trains crossing the Isthmus to keep the railroad line open, and stationed ships on both sides of Panama to prevent the landing of Colombian troops.

4. 1903-Honduras - March 23 through 30 or 31 - U.S. forces protected the American consulate and the steamship wharf at Puerto Cortez during a period of revolutionary activity.

5. 1903-Dominican Republic - March 30 through April 21 - A detachment of marines was landed to protect American interests in the city of Santo Domingo during a revolutionary outbreak.

6. 1903-Syria - September 7 through 12. U.S. forces protected the American consulate in Beirut when a local Moslem uprising was feared.

7. 1903-04 Abyssina- Twenty-five marines were sent to Abyssinia to protect the U.S. Consul General while he negotiated a treaty.

8. 1903-14 Panama - U.S. forces sought to protect American interests and lives during and following the revolution for independence from Colombia over construction of the Isthmian Canal. With brief intermissions, United States Marines were stationed on the Isthmus from November 4, 1903, to January 21 1914 to guard American interests.

9. 1904-Dominican Republic - January 2 through February 11 - American and British naval forces established an area in which no fighting would be allowed and protected American interests in Puerto Plata and Sosua and Santo Domingo City during revolutionary fighting.

10. 1904-Tangier, Morocco - "We want either Perdicaris alive or Raisuli dead." A squadron demonstrated to force release of a kidnapped American. Marine guard was landed to protect the consul general.

11. 1904-Panama - November 17 through 24 - U.S. forces protected American lives and property at Ancon at the time of a threatened insurrection.

13. 1906-09-Cuba - September 1906 through January 23, 1909 - U.S. forces sought to restore order, protect foreigners, and establish a stable government after serious revolutionary activity.
and one more just to round out the list….

14. 1907-Honduras- March 18 through June 8 - To protect American interests during a war between Honduras and Nicaragua, troops were stationed in Trujillo, Ceiba, Puerto Cortez, San Pedro Laguna and Choloma.
Join in on Thursday Thirteen fun HERE
Posted by EHT at Wednesday, August 15, 2007

Hey that was 14! I guess we get a bonus this week .. :) Very interesting list. I love reading about history! Happy TT

Great list! Our military history is vast and reaches farther back than today's conflicts. Thanks for sharing.

Great list! Do your students think that Bush is the only president to have sent troops overseas?

Very interesting. I knew some of this, but not all. Have a great TT. :)

OK. But what was to be protected in Irak ?? apart from oil ??

It's not just more recent times that the U.S. has been involved in military actions overseas.

You're so right but that's not nearly that poetic when you're ignored, targeted civilian.

Hey Buck Naked...considering my students are nine and they have never experienced a full blown history course they are surprised at all of the various times our military has been used.

Gattina....even though my lists mentions the words "protected" many at the of these military actions as well as during ongoing historical debates see Roosevelt's actions as unnecessary. You may not be aware but for all of Roosevelt's muscle flexing the USA soon began a period of isolationism that continued through our involvement in WWI...and once that was was underway we didn't get involved until the end of the the war.

A great lesson and reminder. Thanks.

My TT is about my Summer travels.

Wow, I didn't know about half of these, but my history's never been good, sadly enough. Great TT! My list is 13 poems to read.

Just so you know, I adore Theodore Roosevelt, ever since high school when I read Mornings on Horseback.

Mornings on Horseback.....a most excellent read!

All of the Presidential candidates in both parties mention TR frequently in recent days.

Dont know if it is kosher to put in my 2 cents here but in light of recent misadventures I find that troublesome.

Good post, thanks for linking to me, and BTW, I am also a history teacher in North Carolina (though i live in the Peach State).

It is very interesting to know such information. I never paid attention on this fact before! thanks