13 Things About the Coit Tower Murals 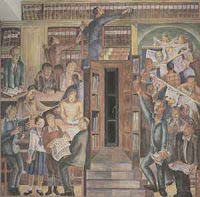 Last week I posted a painting for my wordless image….actually it is part of mural….part of a series of 26 murals that can be found in the Coit Tower. One reader, Keith, first identified the location as San Francisco but the gold star goes to Shannon at Cyberbones for correctly identfying the tower, the location, etc. Here are 13 things about the Coit Tower murals. Don’t miss the slide show at the end of the post with several images of the murals.

1. You can find Coit Tower on Telegraph Hill in San Francisco, California. People often use the art decco, reinforced concrete tower as a directional marker when in San Francisco

2. The money for the construction of the tower came from the very eccentric Lillie Hitchcock Coit. She loved San Francisco, and she got away with doing things other women of her day wouldn’t have been able to do mainly because she was wealthy.

3. Some people think the tower was built to resemble a fire hose because Lillie loved the fire department. Others think it looks like something else, but I won’t mention that here.:)

4. Inside the tower you can find murals from 26 different artists. They were done with the cooperation of the Federat Arts Project which came out of the Works Progress Administration and are protected as historial treasures.

5. The murals were painted in 1934 and are considered to be California’s best example of Depression Era art. The art style is patterned after Diego Rivera's social realism style and show various ways working class Californians spent their time during the Depression.

6. The group of murals contains several different scenes including a bank robbery, a scene from the harbor, and the interior of a department store. My slide show (scroll down) includes a dairy scene, farm scenes, a newpaper office, and manufacturing scenes.

7. The murals were highly criticized by some, and the opening of the tower was delayed for several months because of them. Critics opposed what they called subversive and Communist themes shown in the murals. 1934 is the same year that a maritime worker strike occurred in California that led to several deaths on what is remembered as Bloody Thursday.

8. The images with this post (not in the slideshow) are from the public library scene. This mural was painted by Bernard B. Zakheim. He depicted another artist, John Langley Howard, as the man reaching for the book. The title of the book he’s choosing from the shelf is Das Kapital, by Karl Marx. He is choosing it over the newspaper which he’s crumpling in his hand.

9. Notice the man reading the paper (image below). This is supposed to be another artist, Ralph Stackpole. The headline of the paper reads “Local Artists Protest Destruction of Rivera’s Fresco”. This protest stems from a controversy concerning a Rivera mural at Rockefeller Center which was destroyed because Rivera refused to remove an image of Lenin. Rivera and Stackpole were great friends.

10. Another headline in the library refers to Nazi attacks in Austria. Remember this was 1934 and American had not yet gotten involved in the conflict that would become World War II

11. One of the murals even had the slogan, “Workers of the World Unite!” It was removed before the tower opened to the public.

12. These murals and the interesting story regarding Coit Tower could be key ingredients to any unit or lesson regarding Socialist leanings in the 1930s, the Depression, California history, and Roosevelt’s ABC government since the Works Progress Administration put artists to work. Students love the irony that they were given work during a time when many did not have a job, and they used the opportunity to protest the Establishment.

contains more information regarding the tower and the interesting murals on its walls.

You can see more images of the tower and murals here, here, and here.

Learn more about Thursday 13 and locate other 13 posts to view here.
Posted by EHT at Wednesday, January 23, 2008

I had never heard of these murals. Thank you for introducing us to them.

How did I miss those when I was in San Francisco?

Next time for sure...

Thank you for a very informative post. If I ever get to San Francisco I'll be sure to visit.

Wow. They are beautiful! Happy TT!

Thanks for visiting. I may recreate the slide show in another format. I didn't realize you couldn't embed Photobucket's shows. I don't like it going to another page. :(

Your post was wonderful, as usual and the next time I visit San Francisco, I'll make a beeline to these murals.

There is such a wealth of WPA art in this country. My first exposure was in New York City and you might be interested in this story:

In 1933 while Diego Rivera was commissioned to decorate Rockefeller Center with a 63'x17' mural, he was asked to come down from his scaffolding, handed the balance of his fee ($14,000), and summarily fired. Why? Because he had included Lenin's portrait in the center of the mural and refused (after much discussion and compromise) to 'expunge' Lenin or replace his portrait with an 'unknown' face! Within a half hour of the dismissal, the mural was covered with tar paper and wood and eventually taken down.

Thus was the fate of: "Human intelligence in control of the forces of nature".

Charged with willful propagandizing, Rivera declared. "All art is propaganda."

The US government subsidized socialist artists as part of the WPA, but the scions of Capitalists would not.

To see some more on murals check out:

Great page. Quick correction: these murals were not part of the WPA, which wasn't established until 1935. They were under the auspices of the Public Works Arts Project, which was itself a part of the Civil Works Administration.

From a local history teacher.