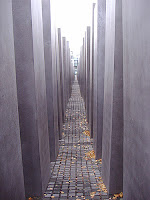 Schools in Britain are dropping studies of the Holocaust and the Crusades to avoid offending Muslims, concludes a British government study.

It found some teachers are reluctant to cover the atrocity for fear of upsetting students whose beliefs include Holocaust denial.

There is also resistance to tackling the 11th century Crusades — where Christians fought Muslim armies for control of Jerusalem — because lessons often contradict what is taught in local mosques.

In addition, many primary teachers don’t know much history themselves, leading to shallow, simplistic and boring lessons.

My head hurts……..this is so incredibly stupid and goes way beyond the idea of being politically correct.

Joanne, you are very correct about the level of content knowledge in elementary and some middle schools regarding history. For the most part I see teachers teaching myths or going to extremes to paint Columbus as the poster-boy for evil or as BadaBing (make sure you follow the link above to Joanne's site for the link to the Daily Mail story and read all the comments) says painting Japanese internment camps in the same way as the Nazi concentration camps.

These extremes and total eradication of certain historical events from the history curriculum as your post discusses wouldn’t be necessary without one simple word……balance. The Crusades were not about making nice. There were terrible things done on both sides. Both sides should be taught. Students are very capable of of understanding the bad as well as the good. I could go on and on, but won’t.

I’m going to go off in nice quiet corner somewhere and spit and gnash my teeth. Grrrrrrrrr…..

(The picture with this post is the Holocaust Memorial in Berlin)
Posted by EHT at Friday, January 18, 2008

I agree with you comment on Joanne's site. Wow!

I teach 9th grade World History and the Holocaust is part of the curriculum. Students in my classroom: Muslim, Jews, Christians, Pagans (I teach in Salem, MA :-)) etc. I've mentioned the Holocaust a few times in class this year and I had a few kids that have no idea what Holocaust is about or means which scares the dickens out of me. :-(

It is our job to teach both sides of the "story" - whether it be the Holocaust or the Crusades. My Muslim students had some unique insight on the topic of teh Crusades.

I would have no clue on how to teach the Holocaust at the younger grades. Due to sensitive and graphic images and information, it must be a challenge at the primary level.

PS I've been to the Holocaust Memorial in Berlin.

As you pointed out History should be taught, but from a balanced (both sides) perspective.

When my boys were elementary age and we covered the Holocaust (briefly) we read The Diary of Anne Frank. In High School we covered it in more depth and read SCHINDLER’S LIST. I wanted my children to know their were some German's who risked their lives to save as many Jews as they could.

Thank goodness U.S. schools are highlighting it; It is one of the most requested sites on my tours.

Yes M-Dawg teaching the Holocaust to nine and ten year olds can be a challenge because of some the footage in videos and images they might see in texts. Atlanta has an excellent Holocaust Museum and when I taught 5th grade we took our students there. There is one section of the exhibits that are very, very graphic and as team we elected to pass by certain images. Believe me....they received the gist of the matter without seeing the most graphic images.

Alasandra...a most excellent point about the Holocaust. When I teach the Civil War I try to bring out that discrimination existed in the North as well. History is rarely all black or white...it is very gray.