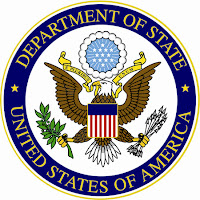 This is a long post with lots of links. Even if you only read one or two entries I guarantee you will learn something.

1. Thomas Jefferson was the first Secretary of State and served under George Washington.

2. John Marshall is more commonly known as a judge on the Supreme Court, however prior to that appointment he represented the administration of John Adams as Secretary of State. Marshall met with the French during his time in office and negotiated an end to the Quasi-War also known as the Pirate Wars and a French/U.S. alliance. Many people don’t know about the Quasi-War so click through and enjoy a new tidbit of knowledge.

3. Henry Clay served under President John Quincy Adams and he is more commonly remembered as “The Great Compromiser” in the U.S. Congress, and he ran for president unsuccessfully five times. He was appointed to the office of Secretary of State in 1824 which was dubbed by Andrew Jackson as “the corrupt bargain”. Clay had also run for president along with Jackson against John Quincy Adams. Read about the election here.

4. John Forsyth was among other things a former governor of Georgia. He served under Presidents Andrew Jackson and Martin Van Buren. As Secretary of State he led the U.S. government’s position in the Amistad case.

5. Daniel Webster represented Presidents William Harrison and John Tyler as Secretary of State as well as Millard Fillmore. Webster had a varied career as a lawyer and Congressman as well. He argued several cases before the U.S. Supreme Court including McCulloch v. Maryland. As Secretary of State he took park in the Caroline Affair which I wrote about here. In 1850 he became Secretary of State for President Fillmore. Ever hear about the Hulsemann Letter? Webster wrote it defending America’s right to become involved in the politics of Hungary. Seems we were sticking our noses in other peoples’ business way back then.

6. Lewis Cass served under President James Buchanan but resigned when he felt Buchanan wasn’t being as strong as he thought he should be regarding the secession of southern states.

7. Hamilton Fish was Secretary of State for President Ulysses Grant. He negotiated the Treaty of Washington with Great Britain in 1871 and worked with Spain to end tensions with South American countries.

8. James G. Blaine served under Presidents Garfield and Arthur. He served in Congress and is remembered for his work regarding the separation of church and state. Maybe you are familiar with the Blaine Amendments? During his time as Secretary of State he organized and led a Pan-American Congress.

9. John Sherman was President McKinley’s man. Does the Sherman Antitrust Act sound familiar? Yes, he’s “that” Sherman. His brother was Major General William Tecumseh Sherman. Unfortunately he wasn’t a big hit as Secretary of State and President McKinley replaced him.

10. Elihu Root served as Secretary of State under President Theodore Roosevelt after also serving as Secretary of War. Highlights on his hit parade include an Open Door Policy in the Far East, getting South American governments to participate in the Hague Peace Conference, and the Root-Takahira Agreement which limited Japanese and American naval fortifications in the Pacific.

11. Frank B. Kellogg….Presidents Hoover and Coolidge called Kellogg Secretary of State. He won the Nobel Peace Prize in 1929 for co-authoring the Kellogg-Briand Pact

12. Dean Rusk …I included Dean Rusk because he was born in the very same county that many of my ancestors were born…..Cherokee County, Georgia. He served as Secretary of State under Presidents Kennedy and Johnson. He was a firm believer in military action in order to keep Communism at bay during the Vietnam era. He was a controversial figure during controverial times.

13. William P. Rogers served under President Nixon. He attempted to secure peace in the Arab-Israeli conflict through the Rogers Plan

Boy, just when you think you know a lot about our country!

Thanks for the education!

I'd never heard of Henry Clay until the other night someone gave him as an answer on Jeopardy...now I know who he was.

You're right - I did learn something, actually more than one thing so thank you.

You're right - I did learn something. Probably the most educational TT that I've read today. :)

Those were fun to read!

I've never heard of the Treaty of Washington, to my shame. I've bookmarked this TT so I can come back later and read it properly, links and all.

I did not know the Pirate Wars were also called the Quasi War!

Then again, much of this is new to me. What an incredible blog you have here.

Fantastic list... and more I didn't know about Henry Clay. As a Canadian and a War of 1812 re-enactor, I'm malevolently aware of him in other ways. :)

Oooo! A blog after my own heart. Thanks for stopping by my TT. Now I have a new blog to read. Excellent list.

So interesting! Thank you for taking the time and doing this 13!

Since I am from Raleigh, NC, I am always interested to see something about Henry Clay and Presidential elections. He basically doomed any chance of his candidacy due to an action taken here. He wrote a letter to the National Intelligencer in Raleigh in 1844. In it he opposed the annexation of Texas. He was visiting his friend Col. William Polk and according to legend he wrote it sitting under a certain oak. The oak died several years ago, but the spot was marked by the D.A.R. years earlier. When you come from a moderate sized and late blooming city, you find it neater than most others when you see its name in print. The text of the letter can be found here http://www.arts.mcgill.ca/history/faculty/troyweb/Courseweb/HenryClayRaleighLetter.htm