Have We Always Had Terrorism Or Is It Something New? 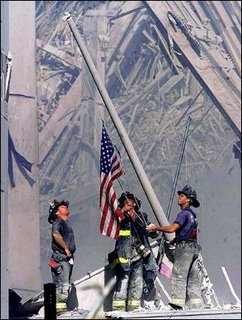 During our class changes I stand at my door herding one group out and the next group in. This is the time for hellos and goodbyes, and last minute reminders. I frantically repeat over and over, “Don’t forget to take your notebook home. You’ll need your notes to complete the homework.”

This is also the time I hear things like “I forgot my homework”, “Can I go to the bathroom?”, “So and so called me a so and so”, and the ever popular “I don’t feel so good. Can I go call my Mom?” At least twice a week someone approaches me with blood dribbling down their chin grinning ear to ear as they display a tooth in their outstretched hand. Three or four drop all of their books in the hallway as they negotiate around each other. The sound is deafening. Someone inevitably decides its time to clean out their desk at class change and must be shooed along.

It is a hectic time.

I can’t help but think, “Head 'em up! Move ‘em out! Rawhide!” as we play fruit basket turnover. Somehow, someway we manage to move every fourth grader to a different place in three to four minutes. Students settle down again by writing their assignments in their agenda books and are required to read through their notes until we are ready to begin the day’s lesson.

Sometime in early September, in anticipation of the eleventh, I attempt to honor those brave souls who perished that day by putting historical events in context for my wee ones. In an attempt to show students that history is linear and events can be connected over time I like to answer the inevitable question I’m asked every year around the 9/11 anniversary……”Elementaryhistoryteacher, have we always had terrorism or is it something new?” Every year it’s the same….new kids, same questions.

I show the students a short power point I’ve put together that shows images from 9/11------ones that are appropriate for nine year olds to see. I tell them the story from my point of view that day because these students have no real memory of that day. Each year my groups are further removed from the shock, pain, and fear of that terrible day as time marches on.

Students begin peppering me with questions. Why? How? Why didn’t we…? Why can’t we….? and finally What is terrorism and how did it get started?

We use several different dictionaries to arrive at a definition and we discuss what it is not as well as what it is.

I then hand out a list of various terroristic acts against the United States since its earliest days through 2000. We read through them together.

Here’s what the students see:

August, 1998: The U.S. embassies in Nairobi, Kenya and Dar es Salaam, Tanzania were bombed killing 224 and wounding many others.

June, 1996: 19 Americans and approximately 500 people were injured when a bomb was placed at the U.S. barracks in Dhahran, Saudia Arabia

April, 1995: the Oklahoma City bombings at the Murrah Federal Building killed 168 and injured more than 500

December, 1988: The bombing of Pan Am 103 over Lockerbie, Scotland kills 270 people, mostly Americans.

September, 1986: Twenty people are killed after security forces storm a Pan Am plane taken by hijackers at the Karachi Airport.

June, 1985: Robert Dean Stethem, a U.S. serviceman was killed and his body thrown to the tarmac at the airport in Beruit, Lebanon when Shiite Muslims hijacked a TWA jet carrying mostly Americans. Thirty nine others were held hostage 17 days before being released.

September, 1984: The U.S. embassy in Beruit, Lebanon was bombed killing 16 and injuring the ambassador.

October, 1983: The bombing of the U.S. Marine barracks in Beiruit, Lebanon kills 241

Students take a look at the timeline. I ask them to work together and underline repeated words and phrases. After calling time I write the repeated words on the board as they call them out to me---------------Americans, embassy, airplane, airport, Beiruit, Lebanon, bomb, hijacked

Nine out of eleven situations occurred on federal owned properties, ten out of eleven involved bombs, and two of the eleven actually occurred in the United States.

“What do you think is going on?” I ask students, “What is causing all of this to happen?”

“All of these things are happening to us.”

“Yeah, all of those events are within the last twenty years or so.”

“Good observations,” I say, “but let’s take a look at this.”

I direct students’ attention to the television screen where I’ve popped up a few power point slides. I read off each one as I snap through them briefly explaining the sitution the slide details.

December, 1941: U.S. military instalations at Pearl Harbor were attacked by the Japanese…2400 deaths. This led to the U.S. involvement in World War II.

September, 1901: President McKinley was assassinated at the Pan-American Exposition in Buffalo by a member of the Anarchist movement

September 16, 1920: Wall Street was bombed by another member of the Anarchist movement when a wagon loaded with dynamite was parked in front of the Morgan Bank.

“So, what is your observation now? Is terrorism just something from recent times?” I ask.

“Terrorism has been going on for a long time.”

“Hmmmmm, your right, but after 9/11 many people compared Pearl Harbor to the World Trade Center bombing,” I explain before continuing, “Japan’s a country. What country attacked us on 9/11?”

I’m met with blank stares. I wait. Finally a hand goes up.

“Al-Quaida?” someone else adds.

I back the slides up to the ones concerning McKinley and the Wall Street bombing. I ask, “Was the group of anarchists a country?”

“No, they were just a group of people.”

I show students another set of slides and again briefly explain the situtations:

Xenophon, an ancient Greet historian instructed his students regarding the use of psychological warfare against enemy populations.

Roman emperors constantly employed the use of terror to maintain power and order across their empire.

Biblical history tells us about the Zealots who would attack Roman and Greek officials in broad daylight to express their displeasure at being dominated by those cultures.

The Spanish Inquisition and the French Revolutionaries employed terrorism to justify their agendas in the name of God and freedom.

From 1865 to 1905 anarchists not only threatened the United States but Europe and Russia as well.

In 1914 an anarchist assassinated the Archduke Franz Ferdinand leading all of Europe and eventually the United States into World War I.

The conversation continues and eventually students arrive at the fact that terrorism has been around along time, and the United States hasn’t always been the target.

I show them one last slide. It depicts the Sons of Liberty throwing chests of tea into Boston Harbor. I briefly talk about the events and explain to students that they will be learning more about it in January. We discuss the fact that the tea is private property belonging to some merchant back in Britain or in Boston. We discuss the reasoning behind the action the Sons of Liberty take.

Students learn that the British considered the Boston Tea Party a terroristic act. No one was killed but private property was destroyed to make a political point against a government. The dividing line between a terroristic act and a freedom fighter is a fine line depending on whose side you’re on.

We all came to a consensus that terrorism confuses us. None of my young charges understand how anyone could use terror to prove a point.

“It doesn’t solve anything,” as one student stated.

I agree. My whole purpose for going through this episode with students was not to provide them with an opportunity to empathize with the terrorist who mean to harm the United States. I’m not a “let’s get in touch with our feelings” type of teacher.

My goal is to show them that historical events aren’t always cut and dry. You can’t look at one list of events and decide how things are. You need to dig, you need to get the whole story, you need to analyze points of view, you need to see that cause and effect do play a role in history. Events are connected whether we want them to be or not. I ended the lesson by reminding them that their education is the key for them to be a good citizen. They should always dig for more and not trust what they see on television, in a newspaper, or even what they hear from a teacher. They should always gather the information on their own and arrive at their own interpretation.

As far as solving the whole terrorism question I believe the solution is as convoluted as solving the education quagmire. There are no easy answers, and there is not a one-size-fits-all solution. While I feel strongly that more violence breeds even more I am glad we took some type of action and rid the Middle East of the Taliban and Saddam Hussein. However, we do need to understand that while the terrorists are an enemy they are not our only enemy. Our other enemy is the American extremes…..those of us who over analyze and would prefer no action against the terrorist feeling that the United States has gotten what she deserves, and those of us who are so uninvolved we don’t participate in the American experiment at all.
Posted by EHT at Saturday, September 09, 2006

Great lesson. It would be a great lesson plan to give to parents at a PTA meeting -- they don't know it, either.

Do you have the pressures we have in Texas, to make sure lesson plans are always tied directly to something that will be tested on the state exams? I'm not sure this plan would be popular with principals in Texas who are making such demands.

Can I sit in on your class? I don't remember learning any of this, even in High School.

Ed, I do have the same pressures as you do regarding staying on point with the standards. However, if my little ones have to sit through an assembly or attend a balloon release (all worthy uses of our time for the anniversary of 9-11) I want my students to understand what the fuss is about. I can argue that I am laying groundwork for the American Revolution, the Civil War, and my previous post concerning the Barbary pirates....? Well, I teach that because I cover the presidency of Jefferson leading into the War of 1812. Usually my lesson plans are in very thick binders and are inches thick with various choices I can make with activities and projects based on the current needs of my students. Very few of those that peruse lesson plans want to delve into mine and....I also can spout off the numbers of two or two standards.

Thanks Lady S. Come on over. Sometimes I think I actually learn more through the process of teaching than my kids do.

re: proofread - That's funny because I thought you were being clever and inventing your own new phrase. How do you research your terrorism, or other themes in history?