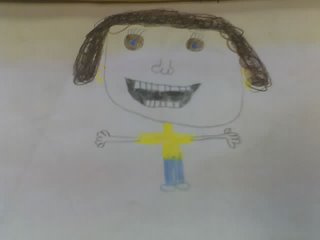 This picture was given to me this week by one of my little historians. He’s a sweet young man and he came to me at the end of the day and laid the drawing on my desk with an awkward grin. At the top it said To: Elementaryhistoryteacher, From: Cute Little Boy (not his real name). It was a simple gesture from him to me. However, I probably didn’t really express to him how much his drawing meant to me at that moment after a very difficult day of crazy school. I placed my arm around his shoulder and gave him one of those “safe” side-hugs and told him thank you. His heart soared and so did mine. We both knew someone cares.

I have had a difficult last few days. A terrible feeling of loneliness has filled my whole being. I have felt that the very essence of my being has been ripped from me. I have been in agony. The most mundane activities of getting through my days have been so much more difficult since…since…since the lap top left for San Antonio.

Okay, okay….the loneliness was actually because Dear Hubby went to San Antonio...but the lap top went with him. The device I have come to depend so greatly is actually his so I couldn’t put up too much of a fuss. He runs his own business and needs to have constant communication with his clients etc. We don’t do well apart (I'm speaking of Dear Hubby and I…..not the computer) so it was a great reunion when he arrived safely back in Atlanta this afternoon. The lap top and I have had quite a reunion as well. I waited an appropriate one hour and a half after Hubby Dear walked in the door before I ransacked his suitcases to rescue the lap top from the darkness. I praise the safe return of the lap top, and yes, I recognize I have a problem.

I had to resort to using the “family” computer that Dear Daughter has complete control of with the proper amount of parental guidance. I had to navigate a cutesey cursor that left a tail of sparks everywhere you moved it on the page and had to navigate around constant instant messaging boxes popping up at the most inopportune moments blinking comments like, “Waz up?”, “HEY RETARD!” and the ever popular “What ‘cha doin’?” For some reason everything I typed in Word had blinking marquis lights around it. It was making me dizzy. Dear Daughter finally had to help me turn that little cutesey off. So, praises and recognition goes to Dear Daughter for her computer know how….she’s self taught.

Dear Hubby called last night to tell me where he was. He was high atop a building having this fantastic dinner looking out onto the illuminated Alamo. He said it was awesome. This afternoon he told me there were a couple of folks in his group that didn’t know what they were looking at. Imagine that! He told me he quickly told these people the importance of where they were at and told them if I was there with them I could give them a thorough lesson. You bet I would! I love it when Dear Hubby notices my strengths and talents. It makes me do the happy dance. He hates to be away from home but went through with the trip to help his business so kudos to him for being the great provider he is and well…..he’ll receive my praise later….after the football game he’s watching. First things first, you know.

Many praises to the faculty and staff at my school. We have survived week one of Crazy School. If you missed my post about crazy school you can see it here. One more week of testing with the added bonus of student teachers arriving Monday morning. Crazy, crazy, crazy school!

I got up this morning and went to school to create a new seating arrangement, to do some necessary cleaning and clearing out, and to prepare a place for my student teacher to perch. I was tired and had a headache, but I went on anyway. A nice quiet morning at home doing much needed laundry (Dear Son dropped off a basket last night on his way to Georgia Southern College for a weekend of fun and frivolity) and house cleaning beckoned to me but the call of the classroom was louder.

As I was walking into the building a Dominos delivery car was going by. The driver hung out of his window yelling my name over and over again, “Hey, Elementaryhistoryteacher! Hey! Hey! How ya’ doin’?” He was hanging half way out of the car. It’s a wonder he didn’t wreck or fall out. I gave the young man a big wave. As I put my key in the door of the school I was smiling. I still had a headache and still felt exhausted but just the simple recognition by that young man as I entered the school gave a lift to my heart. He didn’t have to say anything to me. He could have just thought to himself…."There’s my fifth grade teacher. Gosh, she’s gained weight and looks older.” or “There’s Elementaryhistoryteacher. She still goes to school on Saturday. When will she learn?”…and gone on without opening his mouth. How many times have you seen someone from your past and NOT said something to them? Sometimes we don’t say anything because we are afraid they won’t remember us. We are afraid of embarrassment. We might just be missing that one opportunity to make someone’s day including our own.

Praises and recognition are the best, you know. They can really turn a bad week around. I discovered this week that my post 9-11: Lessons Learned had been linked to by the Blogboard at Teacher Magazine. The History Carnival hosted by Ralph E. Luker at Cliopatria included my post Have We Always Had Terrorism Or Is It Something New?. The entire 39th History Carnival can be found here.

I also need to praise Mr. Luker for a recent post titled Women and History Blogging that can be found here. He provides an extensive list of women bloggers who post entirely on history topics as well as women who blog about history and other topics. I was so pleased he included me in the list.

So go forth and recognize and praise as many people as you can next week. You'll be the better for it, and you'll make someone's day.
Posted by EHT at Saturday, September 16, 2006

The article I was talking about over at Dennis Fermoyle's blog regarding the San Francisco school district is in the April 2006 edition of Reason Magazine. The title is "The Agony of Education" and you can access it online. The San Francisco superintendent was Arlene Ackerman. There is a separate interview with her.

Correction - the title is "The Agony of American Education"

Love your blog/site. FYI: in the last line of your quote in today's USA Today there is a grammatical eror: "...daunting and psychologically exhausting to my colleagues and I." It should read "...to my colleaugues and me."

Anonymous, thank you so much for the information. I am sure you are well aware that what we say and how we say it doesn't always tranfer to the printed medium the way we would wish. Unfortunately I don't not have any control over the final copy of any of the articles that are published by USA Today. While I would have liked for my exact words to be used they were not. I am so sorry this caused you distress.