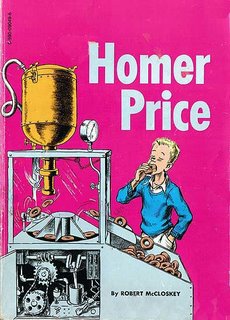 I try to have a read aloud in both of my language arts classes. Sometimes it’s hard to fit it in, but I feel strongly that students need to have fluent reading modeled for them continuously. I have several books that I keep in a special plastic container labled “KEEP OUT”, “THIS MEANS YOU”, “BEWARE”, and “PERSONAL PROPERTY OF MRS. C”. Inside the tub are my very personal copies of certain titles….Treasure Island, Moby Dick, Frindle, every installment of Lemony Snicket’s books, and many, many more. I try to fit in read alouds with social studies as well…mainly with short picture type books aimed at upper elementary and middle grades (yes, there are quite a few) and the longer chapter books as well.

I had finished our read aloud and had to make a new choice in a hurry. I relied on an old friend….a sixty year old friend to be exact. His name is Homer Price and he was already nearly thirty when I would steal away to a quiet corner hoping my sister hadn’t noticed I had lifted her copy of the Robert McCloskey classic.

I introduced the book to my students by hugging the book dearly to my chest and exclaimed, “I love, love, LOVE this book. I think you will love this book too.” I then showed them the cover and began telling them how I read the book even before I could read. I asked, “Did any of you ever read a book before you could actually read?”

A few hands went up. I inquired with one young man, “How did you do that? How did you read without actually knowing how to read?”

Very matter of factly he answered, “Well, I looked at the pictures very closely and tried to figure out what was going on. I would make up in my head what made sense.”

Several other heads nod. I agreed with the young man and told the kids I did the same thing as a child especially with Homer Price. The pictures are spectacular in a McCloskey tale. There is rarely color, but oh the detail. This picture from the chapter regarding Uncle Ulysses and his doughnut machine is one of the best. Look at all the detail. I showed it today as I began reading the doughnut chapter and the kids were mesmerized by all the detail as I passed the book around. Just post this picture and ask kids to make up stories and what tales they will weave. 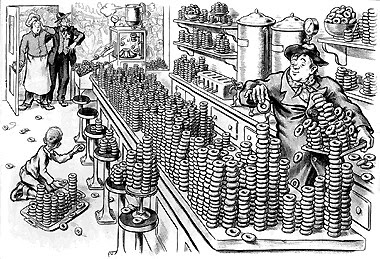 Now you may be asking, “Elementaryhistoryteacher, what does this have to do with history?” Hmmmmmmm, well first of all I made sure my kids noticed the pubish date of the book. It was first published in 1943. “Gee,” I asked my students. “How many years ago was that?” Lot of question marks met my gaze. “Discuss this in your groups. How would we figure this out?” I won’t go into it here, but let’s just say they were very creative in trying to figure this out. I was a little disappointed they didn’t already know or shall I say….remember how to do this. We had a short lesson in figuring out dates and years elapsed and discovered Homer Price was published sixty-three years ago. One young man raised his hand and said, “Mrs. C., I didn’t know you were THAT old.” I stared at the young man, I stared at the other kids, I stared at Studentteacherguy who was standing at the back of the room greatly amused.

I finally said calmly, “No, sweetie. I’m not THAT old. The book was already thirty years old when I began to read it.” I thought to myself, “Self, get on with it. You can bang your head against the door jam later after everyone has gone.”

So, you can use a classic piece of literature to teach how to figure elapsed years. There’s more…….We very quickly discussed what might be going on during the 1940s. More stares. I try again. “What happened on December 7, 1941?”

“Oh, oh, OH…I was looking at one of your books during testing and it was about Pearl Harbor. PEARL HARBOR!”

“Yes, your right. Boys and girls our country was involved in World War II during the 1940’s. Does anyone have a grandparent or great-grandparent that fought during World War II?” Several hands go up. Even though the book does not bring up talk of the war there are hints about the 1940s and American life during that time. By pointing out these details I am allowing the students to develop prior knowledge about the time period and they can layer it on what they already know. Homer’s family owns a tourist camp, a type of motel, which used to be very popular in this country during the 20’s, 30’s and 40’s. There’s a sense of small town life and a time when people were friendly and kind to one another. We discuss why Homer builds radios and why when he goes to the movies he is there for several hours…..a cartoon, a cowboy serial, a superman seriel, a news reel or two, and finally the movie. This is a time period alien to my kids….gee, it’s alien to me as well. Most of us own at least two televisions and movies can be downloaded right from the couch. We can’t think of a time when they weren’t in everyone’s homes. In the chapter we began reading today Homer’s mom and his Aunt Aggie go to a women’s meeting where they are going to do some sewing for the Red Cross. I ask, “Ok, why would Mom and Aunt Aggie work on sewing for the Red Cross?” Kids correctly arrive at the fact that the women were contributing to the war effort.

Even Studentteacherguy seems smitten with the stories. He listens right along with the kids and mentioned today, “Wow, those are great pictures.” I reminded him that new literature is great, but we should NEVER forget the classics and their importance of teaching so many different things to our students.

It also doesn’t hurt for students to see us relive moments from our childhood either.

A wonderful set of essays regarding Robert McCloskey who is no longer with us can be found here and a biography can be found here. Also Economics can be a hard topic to crack with nine and ten olds, but an old lesson plan on the Internet found here has been a big help to me in the past.
Posted by EHT at Monday, September 25, 2006

If I dig through some cobwebs, I remember reading Homer Price when I was a child, too. Quite enjoyable! Now I feel compelled to find some!

I fell in love with the Homer Price Books at my grandparents' apartment more than forty years ago. I have new editions now that I'm going to give to my son. Robert McCloskey was a genius, full stop.

I read "Beezus and Ramona" before I could actually read. In my version, though, Ramona was a boy (she looked like a cousin of mine) and the art teacher with the cat-eye glasses and fun earrings was my aunt who had the book sitting on her coffee table whenever I visited.

BTW, I haven't seen the cover of the Homer Price book in YEARS. Just seeing that illustration takes me back to second grade. Thank you.

I can't remember if I mentioned this to you. If you do the Orphan Train with your kiddos, Rodzina by Karen Cushman is very good.

Ramona Quimby was my best friend as a kid. It is so amazing how set in history some books are, and yet can transend time.

Lady S, I'll look into that tip. We read A Train to Somewhere which is about the orphan trains.

I agree with all three of you...books like Homer Price and the Ramona books and Henry and Ribsey are like old friends. Don't forget the Carolyn Haywood books either....B Is For Betsey and A Star for Betsey to name a couple.

I just happened to have finished my read aloud yesterday and needed a new book to start today. I hadn't read Homer Price in about 15 years to my class and had actually forgotten about the book. Your ideas on incorporating background were helpful and the kids really enjoyed the mini-lesson tied to the start of the story. My third graders and I thank you. :)