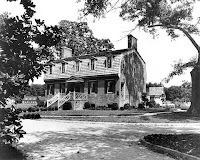 There are many things that prompt a family history project—a school assignment, a desire to see if you are related to anyone famous or infamous as the case may be, and simply wanting to know your family roots. Perhaps you want to know where your family first settled in the United States or maybe you want to be sure about the country your family originated from. Perhaps you simply want to identify the first one in a long line of folks similar to you.

My father began his quest in 1985 after the birth of Dear Son. My parents made the trek from Canton, Georgia to Virginia Beach, Virginia to see their newest grandchild and stayed a few days. While Papa Buddy, as his grandchildren call him, was thrilled to hold the newest member of our family he was distracted a bit by a local Virginia Beach attraction called The Francis Land House (pictured here).

I had already wondered if Francis Land could be an ancestor as I passed by the home weekly going here and there. We discussed how the family line of Francis Land would probably have been researched already all the way back to relations in England. If we could get our line back far enough perhaps we could find the link that would connect the two families.

Papa Buddy made sure he visited the property before heading home, and once back in Georgia he became more than interested in his family line. He made sure he let the docents at the Francis Land House know that he was a Land, and my mother stated he was treated really well while there. Today my father has a lovely picture of the home framed along with a nice handwritten note from the director of the property hanging in his home. Through his research we discovered that Charles Lindburgh was part of a Land family branch on his mother’s side, and we found this interesting person as well.

Today because of my father’s hardwork we know for certain who is who from my children back eight generations. I can say with certainty that I know the name of the sixth great-grandfather of my children dating to the birth of Isaac Land, Sr. in 1750. Fortunately a relative has posted the line including some of the other sibling lines as well. Unfortunately it was at the year 1750 that my father reached a brick wall in the paper trail which so often defeats a family researcher.

My earliest known relative, Isaac Land, Sr., is in the militia records and they indicate he fought during the fall of Charleston because in 1785 he collected his pension. His son was named Jeremiah and his wife, Catherine, was born in Fannin County, Georgia. I know that my family was in a group of many settlers that began to move from North Carolina over the mountains into Tennessee and later Georgia. The first relative that did this was Isaac Land, Jr. He’s buried in Pickens County, Georgia and I have been to his grave. He was minister of the gospel for sixty years. It is at this point that my part of the Land family finally settled in and around Cherokee County where my father lives today.

The question remained, however, who came before Isaac, Sr.?

Many family groups are bridging the paper gap in family lines by using DNA testing. When paper proof cannot be located DNA can at least provide information that one group is related to another. Will we ever find a missing link that joins our family group to the group for Francis Land? I don’t know, but I do know that through the process you do find out little details you wouldn’t have known earlier. This is the webpage announcing the details for a DNA project with several Land family lines, and this is the page that proclaims:

Now we just need to figure out how!

Occasionally as I do a new search under the family name I discover pictures of relatives others have posted. At this link I discovered a great uncle many times removed in the first picture. In the fifth set of pictures my great grandfather is featured with a great uncle and his son and grandson, and in the final photo I discovered a family grouping of my great grandparents and all of their children taken at the homeplace that used to be on my father’s property. My father has the same photo. My great-grandparents are sitting on the second row in the middle and along the bench with them are their children. My grandfather is on the left at the very end with my grandmother standing immediately behind her. Their daughter Rachel is next to her while the other daughter, Ruth is on the row with only four girls. She is the first one on the left. The note with this picture indicates it was taken in 1927, so it was two years before my father was born.

This post was actually prompted by Dr. Blaine Bettinger at The Genetic Genealogist who posted his own thoughts about the genetics of the blogging meme, The Thinking Blogger.

When I discovered Dr. Bettinger had linked to me I clicked over and read his post. As I read it I couldn’t help but think about my father’s family line. Once we go two steps away from my grandfather, our family, like many others, have no pictures, no letters, and no journals to indicate to us who these names on our family tree represent. These ancestors while they are very important to my family are merely inked names in dusty record books across time. We will never know what they actually looked like or sounded like. I know that certain members of my family fought in the Revolution, in the War of 1812, and in the Civil War. We have papers that track their movements, but I don’t know why they fought or how they felt about their service.

I was able to reach across the Internet last week and introduce myself to Dr. Bettinger as his blog meme great-grandmother many times over. Unfortunately my oldest ancestors cannot do that except by exisiting as a name on a list.

The optimist in me, however, would like to think that nine generations or so in the future as another member of the Land family may be searching for relatives they will find more than simply names and certificates in heavy books. They will be able to locate weblogs like this one, websites, and MySpace pages of relatives and discover much more behind a name with a simply click of a mouse.
Posted by EHT at Monday, July 02, 2007

Tracing your family roots is great. I love to see how the internet revolution also helps people finding relatives and information about ancestors. In my school, the students have to write a paper in 9th grade about their family history. Most of the time the kids hate writing papers, but this assignment they love. Plus they get to spend a lot of quality time with their family, asking questions and searching for documents.

OHH one of my favorite topics. Just last night I started work on finding proof for the Mayflower Society. A year ago I was going through papers my grandmother had and discovered an original pilgrim in her line... I don't know if her papers have the documentation needed for entrance but I'm on the trail! It is so exciting.

I can't wait to add in family as I study history with G. Trial of Tears, War of 1812, indentured servants... What a wonderful way to add life to our lessons.
Christie

In addition to The Genetic Genealogist, I have a personal blog that I use for day-to-day things. Part of the reason I do it is because I believe that years from now (10, 100, 1000), my descendants will be able to look back and learn about me and my life. Who knows, maybe they'll even find this comment! By the way, you have a great blog, and I plan to keep reading!

And Frumteacher, that same assignment in 9th grade started me on a lifetime of genealogy, and ultimately to genetic genealogy. It stands out as one of the most important and life-changing things I ever did in school.

Adding family and how they fit into historical events always seems to motivate even the most unmotivated student.