A WONDERful Project to Begin the Year

The announcement this past Saturday regarding the new Seven Wonders of the World got me to thinking about how I could use the old and new list when school starts. The first couple of weeks of school are always a little different as students get used to procedures, schedules are continually tweaked, and I’m attempting to get to know the level of background and skill knowledge of students.

I’m fairly certain none of my students would be able to correctly name the Wonders on the list that has been around since the Middle Ages. Can you?

So, how'd you do? The website found here might help you identify the former Wonders of the World. I would hope that you at least got the third one---The Great Pyramid of Giza.
I’m sure many of my young ones would at least state the image is an Egyptian pyramid. As far as the other images go I would give students a little background to the old Seven Wonders list and identify each of of the images----where it is and how it figured in with history.
I would ask students to look at the images again to see if they notice anything in common with them. Notice that all of the images are produced with the exception of the Giza pyramid. There's a great reason for this. The locations that we have long called the Seven Wonders of the World are mostly gone. We have the skeletons and foundations of some, but others......basically they are myth long since eroded into a faint memory.
With this mind I would direct students to some other images. Do you know these? 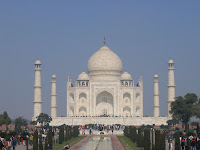 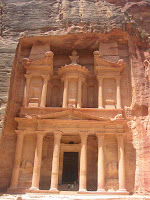 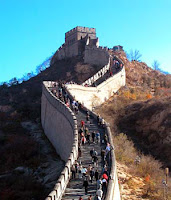 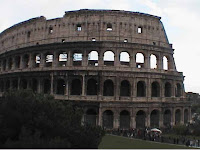 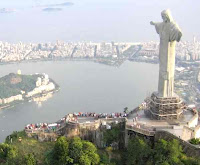 They are more recognizable, aren't they? I'm thinking that just like you some of my students would know some of these. If you need some help check out the Seven Wonders of the World announcement page from this past weekend and check yourself.
I'm thinking I would identify the ones students don’t know and then divide students into seven research groups to complete a mini-project on their assigned wonder. Students would need to identify their wonder, identify where it is, and the history behind it. Students would create a large image of their wonder and color it. I would also want students to determine why they think their wonder was included in the list. Why is it significant for the world to call it a wonder? Students would present their wonder to the class and at the end of the presentations the data and drawings would become one our first hallway presentations of the year.
I've not fleshed this whole thing out yet....I need to look for great web pages I could bookmark for students to use in their research, I need to write a formalized lesson plan, and I need to relate my standards to an assessment rubric. I need to create a slide presentation for the images.
As a summary there are many directions I could go that could lead to some interesting discussions about history and how we relate to it. Why did we need a new list of "Wonders"? What types of buildings were included in the old list compared to the new list? How does religion play into both lists? Is the old list located in one general area of the world compared to the new list? Why?
The most interesting question I could pose to students is regarding how the lists were compiled and how technology figured in to the whole process.
Hmmmm.....what do YOU think? Got any great ideas regarding presenting the NEW Seven Wonders to students?
Posted by EHT at Monday, July 09, 2007

great post! I was wondering what they had finally chosen, and glad to see a few of my favorites made the cut! I think it would be fun to plan/map out a trip to visit them all--including the cultures/currency/political atmosphere etc involved--of course, I am not a teacher!

The picture of the colossus looks like the Jolly Green Giant crossed with the statue of liberty.

Just saying. Actually, fantastic post, as usual. I always thought a good idea to teach this would be to ask the students to come up with seven wonders of THEIR world. Like what they think is extraordinary or important in their city or state.

I browsed a slideshow of the finalists and winners of the new world wonders, but could only come up with a few of the "old" ones.. I think this sounds like a great assignment to beginning of the year!

Ellie Bee, getting students to plan a trip to the locations is a great "teacher" idea. I like it.

Hi Chance! Long time no read.....I did the best I could with the pics..:) Every time I post that many pictures in post they mess up on me. I love your idea about having the students come up with their own list.

I'm a little disgruntled by the vote after being in Peru while it was going on. In each of the towns I was in there were computers set up and people trying to get Peruvians in to vote for Macchu Picchu....that's right, they were basically rigging the vote!

I was one of the hundred million who voted, however on my list I had included the Pyramids of Giza, Ankgor Wat, Stonehenge, and Easter Island instead of the Taj Mahal, Christ Redeemer, Cichen Itza, and the Colosseum.

Quite frankly, I was shocked at the omission of the Pyramids of Giza!

It seems to me that some of the choices were more iconic than true wonders. I suspect what Sherpa said is quite true, especially in Rio China, and India. There was no breakdown of where these votes came from or the actual number of votes for each site. The vote did not ask the rationale supporting one’s choices, therefore, I have no idea as to the reasons these were the finalists. I’m not sure that this would have been the same result if geographers or engineers were the sole arbiters.

Obviously this vote has a great impact on tourism and a great deal of money is involved.

However in the new list, four of the continents and a subcontinent are represented (including North America with Cichen Itza), Chritianity and Islam (Christ Redeemer and Taj Mahal). Only Africa and Australia are omitted.

If I were to present this to my eighth graders on tour (without a chance for them to do any research), I would first ask them what constituted a ‘wonder’ in their eyes. I would go over the ancient and modern list with a brief description. I would go on to talk about building and engineering and ask them why they think there were no sites in Africa or Australia chosen, or for that matter, the United States. I would also talk about a timeline to see if any on the new list were constructed during the same time or before the ancient wonders and were unknown by the ancients because their world was so small. Were there any similarities to the ancient and modern 7 wonders?

I would compare the Colossus of Rhodes and Zeus at Olympia to Christ Redeemer; Mausoleum at Halicarnassus to the Taj Mahal; and the great Pyramid of Giza to Cichen Itza.

I would ask if these choices would have been their choices and why.

And where would I do this on tour?

In Washington, DC, in front of the Scottish Rite Temple on 16th Street which is a recreation of the Mausoleum at Heliocarnassus

AT the Lincoln Memorial

At the National Gallery of Art

At the National Building Museum

In Alexandria, Virginia in front of the National Masonic Temple which is a recreation of the Pharos in Alexandria, Egypt

In New York City, at the base of the Empire State Building where they have the seven wonders of the ancient world each pictured in colored glass.

In Eureka Springs, Arkansas at the foot of Christ of the Ozarks.

I've been to Petra several times and I've been to the Pyramids - that are still included as a Wonder of the World by the way. Those ruins at Petra are awesome. Even the Romans used them and build a amphitheater and roads and temples there. It's pretty cool. The Pyramids (and this may get some flack) were pretty cool too. I went inside the Great Pyramid and talk about a walk!

However, if you go to etiher place, be ready for the smell of...how do I put this lightly...the slight stench of an outhouse. Crude I know, but just trying to be honest here.

It was funny in Giza though. (Here you shold know I speak Arabic). So I'm walking up to the Sphinx and to get there you have to walk through this open area that has a cafe and tourist shops, etc. These kids are all running around wanting to sell you stuff - cheap stuff, overpriced stuff. They're yelling at you, "you buy, you buy." And I'm saying "la, la." Which is Arabic for no. (I hope this comes through in the writing). After you'd say "la," they'd yell back at you, "NO LA. You buy!"

Maybe you would had to have been there.

If you go to either place, wear VERY comfortable walking, or hiking, shoes.

I know this doesn't help you any in terms of teaching it, but I just thought I'd share it.

I have pictures somewhere of me inside the pyramid. Maybe I'll post 'em.

I have tons of photos of Petra.

Eric, my husband went Giza and he has related some of the same things you desribe. Actually, if I had to choose between Giza and Petra I would choose Petra...perhaps because we know so much abou the Egyptians now and are still learning about the Nabateans (sp?).

Sherpa...Tour Marm I do agree with you about the selection. They don't all seem to be just right. Maybe that says something about a voting process that allowed everyone to particpate whereas the original Seven Wonders lists were mainly compiled by individuals or small groups of knowledgable folks. This would all be part of my discussion with students.

I know this is an old post, but I just stumbled upon it. At the perfect time, too. I'm going to do a variation on this for the second day of school with my world history classes tomorrow. Thanks for the idea!