An Ending or a Preview

Last week I shared with you an unfinished painting for my wordless image. It was begun by Benjamin West (pictured left) who was born in Pennsylvania in 1738. His most formal lesson as a boy regarding painting was at the hand of local Native Americans who taught him how to mix paint using clay and bear grease. By 1763 he had traveled to England where he became one of the leaders of the Royal Academy even though he had no formal art training and couldn’t spell very well either. Once in England West began to work on several commissioned works at the request of King George III. Though West left the colonies before the American Revolution he did have strong connections there. He had been named for Benjamin Franklin, was a great friend of his, and had painted a portrait of him.
I usually end my American Revolution unit by showing students the unfinished work of West, and I tell them the purpose of the painting was to memorialize the signing of the Treaty of Paris (1783). I ask students to think for few minutes and based on what they have learned write a few sentences in their notebooks regarding why they think the painting is unfinished.
It’s so easy to present content to students regarding a war and tie it all up in a nice little bow by telling them Cornwallis surrendered at Yorktown, the British sailed home, the Treaty of Paris was signed, and then BAM…..we move on to the formation of American government.
It just wasn’t that simple.
Generally the British were not that happy with the surrender, and anti-American sentiment was high. True, British citizens were tired of war, but they didn’t like loosing either. Negotiations for the treaty went on for sometime. Benjamin Franklin and his group of negotiators held firm regarding the independence of America and that the British nation should formally recognize it. Some historians have stated that the actions of the American negotiators are the greatest triumph to date of American diplomacy. However, it must be noted that the treaty was only a stop gap measure and many problems remained between the two nations until the signing of the Jay Treaty or Treaty of London in 1794. In the painting from left to right we see John Jay, John Adams, Benjamin Franklin, Henry Laurens, and William Temple Franklin, the grandson of Benjamin Franklin. Yes, I’m aware that he resembles George Washington in the painting. My students usually pick up on this as well. Of course we know that Washington was not part of the negotiations. He was busy doing other things.

The team of Jay, Adams, and Franklin did the majority of the negotiations. Henry Laurens, former president of the Continental Congress, was one of the Peace Commissioners, but he 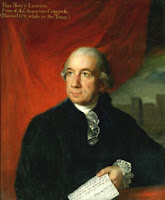 didn’t sign the primary treaty. He did serve an important purpose involving a second agreement that involved the Netherlands and Spain. Laurens (picture at left) who hailed from South Carolina was a major planter and slave holder. Ironically his former business partner in the slave trade, Richard Oswald, was the leader of the British delegation. Laurens’ son, John, was an aide-de-camp for George Washington and was known for several brave exploits during the American Revolution. He also petitioned for the inclusion of slaves into the Continental force in return for their freedom. Georgia’s Laurens County is named for John Laurens. I have detailed bits of his life over at Georgia on My Mind.
The unfinished section of the painting was for the British delegation, but they refused to sit for Mr. West. Their disdain and outright hatred for the Americans kept them from consenting to become immortalized for all time. Many of my students connect to the many disagreements they have with their friends and realize the British really knew how to hold a grudge. Their refusal to sit for the painting is a powerful symbol for students, and serves as a preview for problems ahead that eventually lead to the War of 1812.
By presenting this painting to students I provide a few details regarding peace negotions and press upon the fact that a peace treaty doesn’t mean that all issues are resolved. Some are ongoing and eventually lead to another war.
Posted by EHT at Friday, December 07, 2007

I've seen this picture often in my readings. I'm not sure if I ever read about why it was unfinished, but if I did, I guess it never stuck with me since I found myself in learning mode here. Very interesting...

Thanks June. It really is a great visual to portray British feelings in the years following Yorktown.