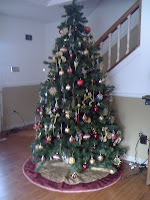 The weather guy this morning said the temp today would reach up to at least 70 today. For those of you who don’t know it isn’t supposed to be 70 in Atlanta during December….far from it.

We are in the midst of home renovations…the kind that takes years instead of months for some crazy reason. At any rate new floors are down in the kitchen, dining and living rooms, new appliances have been installed in the kitchen, and I have too many decisions to make regarding lamps and window coverings. Yes, I know things could be worse.

We did manage to get our tree up this week. If you will remember we were painting last year, and for other reasons I simply didn’t feel like putting up a tree last year. It’s nice to reconnect to all of the different ornaments again.

Lessons on how MySpace and Blogger should not be used are evident in this news story along with some of the fallout here and here. The supposed blog by the mother, Lori Drew, who tricked Megan Meier, is found here. The comments are lengthy but are interesting.

Carnivals abound this weekend…..one of the Christian Carnivals can be found over at Beyond the Rim. They were nice enough to include a post of mine regarding being dead or alive.

The Carnival of Education can be found over at So You Want to Teach? The postings I enjoyed the most from the carnival were Birthday Girl from Bluebird’s Classroom and Celeste Archer’s plea from the Schools For Tomorrow Blog. My own posting in the carnival regarding a dream teaching assignment hasn’t garnered anymore comments than what were already there. Could it be educators see a dream assignment as something so elusive they can’t even fathom one?

Once again I missed the Potluck Carnival over at Ms. Whatsit. It’s not to late to snag some holiday recipes and while you’re over there tune in to some of her other postings.

The Georgia Carnival is being hosted by Drifting Through the Grift. Head on over and see what Georgia bloggers have to offer. It’s hard for me to believe this carnival will celebrate its first birthday after the first of the year. Time does fly.

Under the category botched history…..There’s a reason why I don’t watch The View other than the fact I’m busy during that time…Sherri Shepard asserts Jesus Christ came before the Greek Civilization. Huh?

Finally, make sure you actually read all of Mitt Romney’s speech regarding religion and government given earlier this week before you form an opinion. Here's the Good Morning America page with links.
Posted by EHT at Saturday, December 08, 2007

I saw that clip from "The View" while watching "Countdown". Pretty incredible. Pretty scary! This is the same woman who a month or so ago said (with a straight face) that she wasn't sure if the world was flat or round - she hadn't given it much thought.

As for Romney, it happens he's not to my liking, but it has nothing to do with his religion. So long as a person's religion is kept in proper perspective in its interface with governing...and so long s/he has a brain cell or two, it wouldn't keep me from voting for them.

EHT -- I am hoping that you'll make the next Teacher Potluck Carnival. Surely you have a delicious Southern Christmas tradition to share with your readers! ;-)

June, I don't know how I missed the flat/round debacle....Where do they get these people?

I'm not sure where my vote will go either.....too many antics await us before November. It has been interesting to watch the media ramp things up on Huckabee. I've noticed they've taken to calling him a Baptist preacher of late instead of his most recent title....Gov. of Arkansas. Hmmmmmm....

Ms. Whatsit, if I can find my recipes in the midst of my renovation train wreck I'll see what I can do. I have a pile o' stuff in every corner of every room and I'm close to having a nervous twitch. Notice in the picture with this post you see no furniture or baseboards. Yikes!

I remembered about 3 o'clock today I was supposed to post an explantaion regarding my mystery fish for Wordless Wednesday. If you have tuned in for that I'm sorry. I'll try to get the explanation up by tomorrow.

Hey, thanks for sending people my way!