Lady Liberty and Her Boys 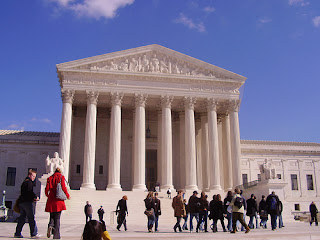 It is amazing to me that it took right at 146 years for this great nation of ours to create a permanent home for our judicial branch of government. The building’s cornerstone was finally put in place in 1932. At that time Chief Justice Charles Evans Hughes said, “The Republic endures, and this is a symbol of its faith.” I believe it one of the most beautiful symbols of our proud Republic.

We have President turned Chief Justice, William Howard Taft, to thank for the construction of the magnificent Supreme Court building in Washington D.C. He was instrumental in seeing that Congress authorized the construction.

This week’s Wordless Wednesday is the image from the western pediment. Thank you for all the wonderful participation in this week’s offering. Angelo was the first to indicate that one of the figures is Lady Liberty. Hootin'Anni correctly identified the location as Washington D.C. while once again A.M. Whittaker was dead on. Teachergirl made a valiant effort in guessing some of the figures are Moses, Confucious, and Solon. She was speaking correctly but they are on the eastern pediment….not the image I posted. Moses, Confucious, and Solon are all three on the eastern pediment to represent the three great Eastern civilizations from which U.S. law was derived. I find it interesting that the tablets Moses holds are empty.

Getting back to the image I posted...

Robert Aitken was given the job of sculptor for the western pediment. He worked in the shed seen below as he carved the figures. Aitken placed Liberty on her throne in the middle guarded by Order and Authority. Aitken later described Liberty as “looking confidently into the future with the scales of justice across her lap.”

On either side of Order and Authority are three figures which depict Council and Research.

Aitken modeled these figures after several prominent figures in law or after persons who had a hand in the creation in the Supreme Court Building to include on the far left Chief Justice Taft as a young boy at Yale. He represents Research Present. Look at the image below and examine Taft's reclining figure. To his immediate left can be seen a crown which one Supreme Court website states is the English crown. Taft is also looking towards a Pope's miter and a Bishop's crosier. Second from the left is Secretary of State Elihu Root who introduced Taft’s bill to create Washington’s Fine Arts Commission. He is one of the two figures representing Council. The figure seen third from the left is the building architect, Cass Gilbert. Finally, here is one of my most favorite pictures. The columns are soaring up towards the wonderful coffered ceiling. Thanks for stopping by my sunflower blog last time.

Great post, very informative! I love the architecture in Washington D.C., the symbolism planned into everything there is so grand and poetic. Would love to see it in person again soon!

LawyerBoy has been waiting to be sworn in at the Supreme Court until our girls can go and appreciate the whole ceremony. Now, I have a whole lot of history I can share with them when we go. Thanks so much for a wonderful lesson!!

it is beautiful! I am a Canadian - thanks for the US history lesson :)