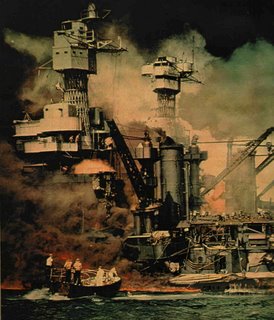 December 7th….per FDR a day that will live in infamy. He was so correct.

My Thursday Thirteen is dedicated to the many men and women who died, were injured, or experienced this shattering event on the day that formalized our participation in World War II.

Thirteen Facts about December 7, 1941…the Attack on Pearl Harbor

1. One source states the attack involved 300 Japanese planes. Bombers first attacked the airfield at Ford Island at 7:55 a.m. This prompted the dispatch, “Air raid---Pearl Harbor---this is no drill.”

2.More than 2400 servicemen and civilians were killed. 55 Japanese airmen were killed and one was taken prisoner.

4. 188 planes were destroyed----155 planes were damaged. The Japanese had 29 planes destroyed and 4 of their mini-subs were sunk.

5.American intelligence had the knowledge we would more than likely be attacked, but they thought it would be somewhere in Asia.

6.Frank Knox, the Secretary of the Navy at the time, said, “No matter what, the U.S. Navy is not going to be caught napping.”

7.A series of errors kept the forces at Pearl Harbor from being warned of the impending attack.

8.Every member of Congress voted to declare war against Japan except for one. She was Jeannette Rankin of Montana.

9.The war declaration ended a long period of isolationism in the United States.

10.The attack on Pearl Harbor was not the only place Japanese forces attacked that day. The British lost the HMS Prince of Wales and Repulse

11. The Arizona is still submerged under the waters of Pearl Harbor and continues to be a memorial to the many men entombed there.

12. The damage at Pearl Harbor was devastating that day, however, vital oil tank farms, the Navy Yard and machine shops were not destroyed. The submarine base, a power base, and the Headquarters Building where the intelligence unit was located were left intact.

13. The Navy Yard and machine shops were key in getting six ships---Nevada, West Virginia, Tennessee, Maryland, California, and Pennsylvania----repaired and returned to service. The Oklahoma was initially capsized, was righted, but was never returned to service.

My kids came to school ready to discuss this today--I was so pleased!

I mentioned it this morning and told the kids in my homeroom a few facts. After a few minutes they wanted to know when I was going to let them visit Secret Santa.

I mean we must keep our priorities straight, right?

Great TT. Thanks for remembering and sharing.

Our school was reminded to place the flag at half staff and my kids just couldn't grasp the magnitude of what I tried to explain to them. By the time I was in the 5th grade, we had lost President Kennedy, Martin Luther King and Bobby Kennedy. I think we these grasped things. Or am I just such a history major that I tend to think in these terms? Could be....

I've learned a lot in reading your post. Excellent!

what an a propos TT - and very informative! history rocks! tks for visiting my TT :)

I just read your and teachergirl's comments, too - re: priorities and student awareness - I think it's definitely the students not you, t-girl, and I agree that their priorities are perhaps a bit mixed up - I teach college French and let me tell you that on both counts it's just as bad (maybe worse since they're old enough to resist any changes in perspective that might be feasible with the younger ones? ...not that I'm sure of that). sigh.