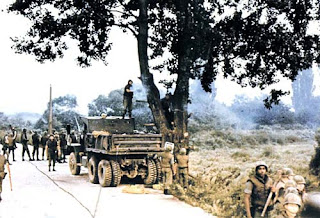 We’ve heard about President Ford’s integrity. His stellar athletic career has been discussed, his Congressional record, and the fact that he served as President and Vice-President without having one single American vote him into office.

We’ve heard numerous discussions regarding his pardon of President Nixon and debated if President Ford made the correct decision. The effect the pardon had on Ford’s subsequent election loss to President Carter has been discussed ad nauseum.

I’ve neither heard nor read anything within the last few days that discuss an event that is known, but is rarely dealt with in the realm of historical “Monday morning quarterbacking”. I’m a little mystified by it. For a couple of days during August, 1976 our nation stood toe-to-toe with an enemy who had attacked two of our soldiers without provocation resulting in President Ford staring down the gunbarrel of World War III erupting in his face,

If you are a regular reader of History Is Elementary you know by now you will need to click over to American Presidents,where I have been given a wonderful opportunity to post about presidents, for the rest of this story.
Posted by EHT at Saturday, December 30, 2006

I was one of the first ten people admitted into the Capitol Rotunda for the public viewing of President Ford Laying in State.

After seven and a half hours, the people in line with me became fast friends. We all had this in common: a deep respect for the President and a sense of history. As we were the very first in line and had waited far longer than anyone, we all were interviewed my several news agencies.

The observations shared by my,'linemates' - all ages and backgrounds attested to his character. Attributes such as dignity, honor, integrity, decency, quiet strength, were overheard many times.

Although I was the only one in our particular group to have voted for him, nevertheless, there was a great deal of respect for the challenges he faced and the role he played to 'calm a nation' and his leadership abilities.

I'm glad to have spent the time to pay my respects and honor one who gave so much service to our country.

Gee, I probably saw you on television and didn't even realize it!

I'm glad you commented on this, and I'm glad you represented so many many of us who were unable to pay our respects.

I watched a portion of the ceremony last night. I was struck by Mrs. Ford and how tired she looked. I was also struck by how attentive her sons and daughter seemed to be for their mother's well being.

The national opportunities for mourning and paying respects are nececessary, but I think we all need to remember the family members at this time. While my mother's wake and funeral were over a couple of days the Ford family have endured several days of ceremony. I pray that God continues to give them strength.

Thanks for stopping by my Sunflower blog and supporting me!
Welcome back anytime.


I will Exercise for Comments!
Sunflower

Happy New Year, EHT! I haven't forgotten about you.

These hidden nuggets make history so interesting. It is also interesting, maybe scary, to think of how history could have gone in an opposite direction in a hurry.