Which Historical Lunatic Are You? 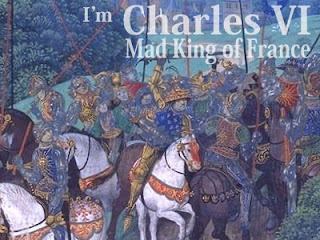 The title question caught my eye as I visited Cliopatria this afternoon. Ralph Luker shared this fun little quiz from Rum and Monkey. Answer the questions and you’re matched up with a historical lunatic.

My results: You are Charles VI of France, also known as Charles the Mad or Charles the Well-Beloved!

The site goes on to give you a full accounting of the person and how lunatic status was achieved. Here are some highlights regarding my alter-ego:

*He was from a long line of dribbling madmen

*An illness brought on instability, and resulted in his hair and nails falling out.

*Cures were sought that involved drilling holes in his skull, an exorcism, a name change to Georges, and begging people to kill him.

*He smashed furniture and wet himself regularly

*Men had to resort to jumping out at him shouting “Boo!” before he would take a bath or change his clothes

*His wife finally hired someone to take her place in his bed.

*Oranges and pomegranates in vast quantities kept a fever at bay until he succumbed in 1422.

*His ongoing illness was probably heredity. He sired 11 children----all of which had problems of their own including one who was afraid of bridges.

Thanks Rum and Monkey for making history fun!
Posted by EHT at Friday, December 15, 2006

I took the quiz and ended up being Joshua Abraham Norton, first and only Emperor of the United States of America! Now, that's a little far-fetched, if you ask me...