It's Important to Know Your Frontier

I’ve been busy this past week working on power points to go with my history units. So far I have completed power points for the War of 1812 and the Louisiana Purchase combined with the Lewis and Clark expedition.

The third power point I’m just now finishing up will have images to go along with my lesson regarding Daniel Boone, the Wilderness Road, and the settlement of Kentucky and Tennessee. 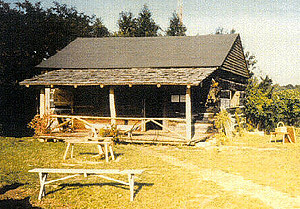 I have found this can be a tricky area for teachers who are history novices because the word frontier can mean different things depending on the time period that is being covered. Several years ago a colleague of mine once remarked, “You know, EHT, I don’t know as much as you do about history so I feel fairly safe with the content as long as I stay in the text page by page.”

I saw her point. I would have to do the same thing if I suddenly found myself teaching math. Staying with the text can get you into trouble, though, and here’s why.

Generally a unit of study regarding the formation of our government is taught after the American Revolution followed by the settlement of the frontier.

My colleague came to me one day and said, “Who picked out this text? It’s useless.”

“Well, I started looking at the lesson about the frontier and it doesn’t have any information about sod houses, the prairie, or the early railroads. What are we going to do?” my colleague wailed.

Gently I told her she was thinking about the wrong frontier.

Even as I did my research this week I came up with many different time periods when I googled frontier. I can see how people could easily get confused.

The frontier in early America changed every few years as settlers became crowded and moved to the outer regions. Folks were moving across the Appalachian Mountains before and during the French and Indian War. That was the first frontier, and it existed several years before the settlement of the Great Plains that brought us tales of buffalo, sod-busters, and cowboys.

What can also add to the confusion not only at the elementary level but can confuse upper level students as well, is we tend to touch on settlement across the Appalachian Mountains as we begin the French and Indian War and we touch on it some more at the conclusion of the war with the Proclamation of 1763 issued by King George III which stated colonists could not settle the lands west of
the Appalachian Mountains. The British intended to hold this area for the Native Americans but also meant to move the boundary line westward as white settlement forced it to move.

We then jump headlong into the American Revolution forgetting about the settlers we’ve left dangling out there across the mountains. After the conclusion of the Revolution and a discussion about the formation of our government we then expect the students to turn their attention back to these settlers who crossed the Appalachians.

This situation is definitely one where I feel a teacher needs to depart from the text program and discuss the back county (deep inland settlements towards the mountains) as well as the crossing of the Appalachian Mountains during and at the end of the American Revolution. In this way it remains in context with events such as the Wilderness Road which Daniel Boone was establishing as early as 1775 , the Treaty of Fort Stanwix (1768), and Sycamore Shoals (1775) which began settlement in what would become Kentucky.

In February, after we completed our examination of U.S. government, I asked my students to tell me what they thought of when I said the word frontier. I wrote the word on the board to give them a visual. Some of the responses were buffalo, cowboys, trains, prairie, and covered wagons.

Clearly there is some confusion regarding the word frontier. People tend to think about the Wild West in connection to the frontier because it was the last frontier Americans settled here in the contiguous United States.

I usually make my point by drawing an outline map of the United States on the board. I add in the Appalachian Mountains and, I sketch in where the Mississippi River would be. I ask students, “Where did the Europeans begin to settle first?”

“Along the coast,” they decide.

Students proceed to tell me that the settlers eventually crowded up in the first settlements and, they began to move inland. We had already learned a vocabulary term for the inland area and I remind students that their text called this area the backcountry. I share with them further that the word frontier can also describe this land. The land at the edge and beyond a settlement is known as frontier.

As we ended our discussion about the term frontier one of my young men raised his hand. When I called on him he stated, “I know what the final frontier is.”

I fell for this hook, line, and sinker, “Really, what is it?”

My young man reeled me in, “Space…that’s the final frontier.”

Clearly this sweetie watches a lot of Star Trek.


Remember that you can subscribe to this blog and receive my updated posts in your email box by submitting your email address in the Feed Blitz box at the top of this page or use the Bloglines button to the right. Thanks in advance for your comments!
Posted by EHT at Monday, June 12, 2006